I love movies.  I love being taken out of reality for a few hours and to dip into the world of whatever the silver screen has to bring me.  Some movies are better than others, and some leave impressions on me that keep me thinking or dreaming.  Million Dollar Arm is one of those films for me.

I will pretend that you haven’t followed along on any of the Million Dollar Arm adventures that I have shared so far.  From the invite, to the interviews with Jon Hamm, as well as three of the people behind the inspiration of the film, JB Bernstein, Rinku Singh & Dinesh Patel, and even  the experience at the premiere of the film.  I don’t want you to think any of those things have swayed my review of the film with you.  Sure, meeting the people that are portrayed in the film made me want to know more, but why I love this movie is because it’s not your stereotypical sports movie, it’s much deeper than that. 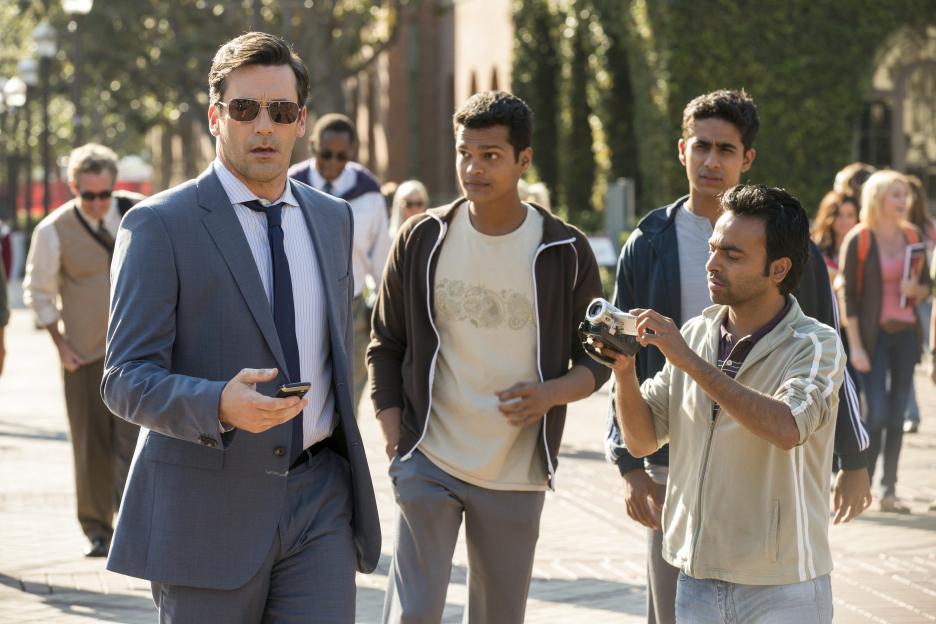 5 Reasons you MUST see this film:  Million Dollar Arm Review

1.  It’s based on a true story.  One that inspires us to dream.  The message is one that is for all walks of life and anyone that has ever had a dream.

2.  It’s a family film.  It is a film that your whole family will love.  If you have sports fans, yes.  If you just have good movie fans, yes.  Everyone should see this movie!

3.  It’s a baseball movie.  Everyone loves a sports movie.  One that teaches about teamwork and commitment.  This movie has that, but on a deeper level.  The teamwork is not on the field but behind the scenes to make the Million Dollar Arm project work.  Commitment is expressed in family and relationships, not just to the sport.

4.  It’s not a baseball movie.  Even if you dislike the sport, or sports in general, the baseball part of the movie is not the story.  So trust that it’s worth seeing no matter how you feel about the game.

5.  It’s funny.  It’s heartfelt.  The cast is incredible.  You will leave wanting to tell someone to see it.

Based on a true story, sports agent JB Bernstein (Jon Hamm) finds that business has changed and things aren’t going well for his career.  In a last ditch effort to save his livelihood he concocts a scheme to find baseball’s next great pitching ace.  Hoping to find a young cricket pitcher he can turn into a major league baseball star, JB travels to India to produce a reality show competition called “The Million Dollar Arm.”  With the help of cantankerous but eagle-eyed retired baseball scout Ray Poitevint (Alan Arkin), he discovers Dinesh (played by Madhur Mittal from “Slumdog Millionaire”) and Rinku (played by Suraj Sharma from “Life of Pi”), two 18-year-old boys who have no idea about playing baseball, yet have a knack for throwing a fastball.  Hoping to sign them to major league contracts and make a quick buck, JB brings the boys home to America to train.  While the Americans are definitely out of their element in India, the boys, who have never left their rural villages, are equally challenged when they come to the States.  As the boys learn the finer points of baseball, JB, with the help of his charming friend Brenda (Lake Bell), learns valuable life lessons about teamwork, commitment and what it means to be a family.

I truly loved this film.  I have now watched it twice for the purposes of this and other posts to help promote the film.  But I will see it a 3rd time with my family for it’s just so good.  If you aren’t a sports lover, you will love this film.  If you are a sports lover, you will really love this film.  With so many movies out that aren’t always family friendly, rest assure, this one is good for the whole family.  I have had a few tweets come to me this week of some that were lucky to have already watched Million Dollar Arm.  It had a soft opening around the country this week.

@tasalinas saw #milliondollararm last night. Loved every minute of it and so did the kids.  Love Disney feel-good movies.

Million Dollar Arm has me smiling all the way through.  It will pull at your heartstrings in a few scenes, but the movie is just a feel good movie with a ton of heart.  The story that it is based on is simply inspiring.

JB Bernstein really speaks volumes here of the importance of getting this story shared, “I would probably speak for all of us when we say that this is a really personal journey for us.  It’s not like your traditional business deal that I’ve done, this is something that obviously is a very pivotal point in our life.  So you know, our hope is really two things.  One is that people take away what these guys have endured, persevered in order to be successful and take away that lesson that you know, dreams are possible in this country more so than maybe anywhere else in the world.  Now for kids, to be able to look at Rinku and Dinesh as role models and say look, if these guys did this, you know, I can do anything.

It’s that first spark of hope not just for kids in India but for kids here, for kids everywhere.  They have these two guys to look at, who have done something that’s never been done in the history of the world, to go from a position of never hearing of the sport.  Rinku won his first game 13 months from the day he picked up a baseball.  Dinesh won his first game 14 months from the first day that he picked up a baseball.  And I mean, that’s just unheard of.  I’ve been a sports man my whole life.  I’ve been an agent my whole adult life.  I’ve never heard of anything like this.  I never heard of anybody even thinking something like this could be possible.”

I am sure kids of India will now have a commonality with kids of the world in looking at these two as role models.  What else can I say?

*I was invited by Disney to the Million Dollar Arm Event where I screened, interviewed people of the film as well as attended the premiere.  Good thing I had the best time ever and really loved them movie  for as always all opinions are my own but this one was easy.  Photos courtesy of Disney unless otherwise credited.