Most of my reading audience probably remembers the 1987 teen comedy Adventures in Babysitting. It’s about a group of suburban kids whose night takes them into the city for a night full of, well, adventure. The story is just a little different in the remake with two babysitters, instead of one, and a few more kids. The adventure, it’s just a little crazier. 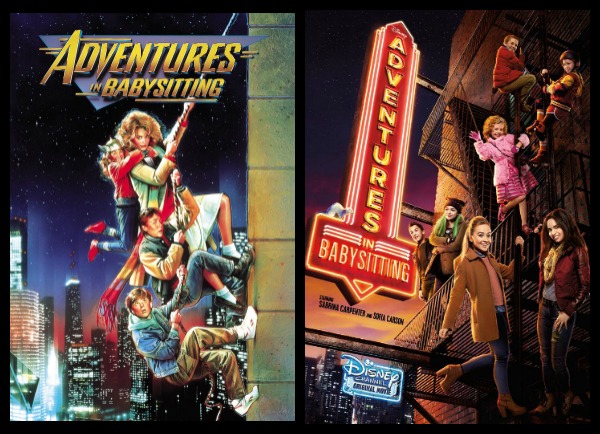 Why remake Adventures in Babysitting? “When I had a chance to put this into development, I leaped at it because I loved the movie so much as a kid,” she said. “I like to jokingly say, this one is twice the babysitters, twice the fun!”, shared Naketha Mattocks VP, Disney Channel Original Movies.

The perfect pairing of two of Disney’s most popular stars, Sabrina Carpenter (“Girl Meets World”) and Sofia Carson (“Descendants 2”), was meant to be. “What’s fantastic is that you get to see the chemistry they have… I call them our little Tina Fey and Amy Poehler,” Mattocks said, “because they really do have that kind of chemistry and comedic timing.”

In “Adventures in Babysitting,” a dull evening for two competing babysitters, Jenny (Sabrina Carpenter) and Lola (Sofia Carson), turns into an adventure in the big city as they hunt for one of the kids who somehow snuck away.

While in LA for the Captain America Event, we were invited to screen Disney Channel’s 100th original movie as well as interview the two young stars. I will be sharing how smart and inspiring these two are in a future post. It will be worth the read, for these two will be around for a long time.

The Disney Channel will air a 10-minute sneak peek of the movie on Friday, June 3 before the full film will be available, via VOD and the Disney Channel app, on June 17. That’s a week before its premiere date!