Being an election year, let’s face it, we’ve been inundated with news coverage of the ones running for office. However, I have some refreshing news, Captain Obvious is running for President! 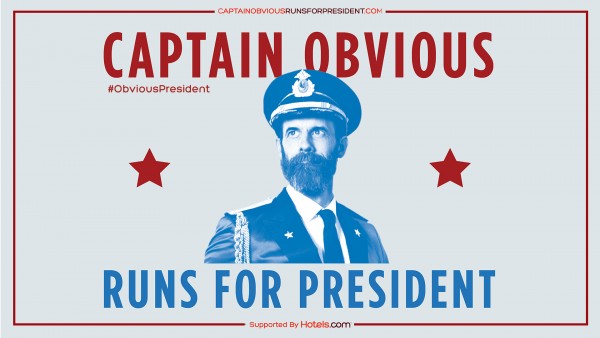 With the election year already proven to be interesting as it stands, kicking it up a notch, Captain Obvious and his satirical commentary videos, will give you the break from the craziness of the other candidates! In case you missed him announcing his run for president, here’s your chance to watch him make his official announcement.

For his campaign, he hits all 50 states. Watch as Captain Obvious gives you a little look at him in each state. Warning, this is HILARIOUS! It makes wanting Captain Obvious the #ObviousPresident.

Hotels.com is supporting Captain Obvious during his race because they believe in simplicity as much as he does – and he’ll need a place to sleep at night. They’ll be providing him with running shoes, socks, shorts and everything else he needs for his run. Hotels.com sees the presidential race as a creative opportunity to utilize Captain Obvious as a way to be a part of, share in the broader cultural experience and to engage. 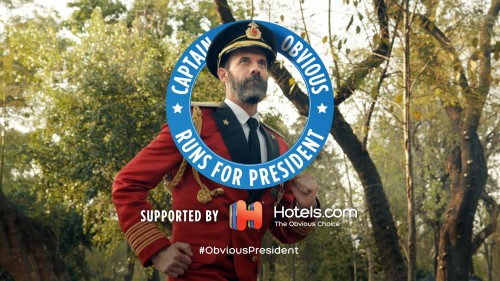 Captain Obvious needs your support, and really, why wouldn’t you want to support him? Follow him on Twitter  to keep up with the fun!

Join me on Thursday as I challenge the candidates on how far they actually ran this week. Tell the truth, guys. #GOPDebate #obviouspresident

“Hotels.com is giving me all the socks and shoes I need. Please donate to these guys instead”, shared Captain Obvious. When you go to the Captain Obvious website, make sure to click on donate to give to one of the three charities listed.

Join me in supporting the @CaptainObvious race for President at CaptainObviousRunsForPresident.com, and tell me, which hotel in which state would you be interested in visiting?