With a few Marvel films under her belt, I was curious as to where Emily VanCamp would end up in the with the team split in Captain America: Civil War. Without giving away any spoiler, Emily sat down with us during the Captain America Event, and she talked about getting fit in order to keep up with her fellow Marvel friends as well as sharing which team she’s picked.

In Captain America: Civil War, Emily plays Sharon Carter/Agent 13,the daughter of Peggy Carter. Yes, Steve Rogers love from World War II. So the story is deep and Emily puts her all into the role.

Emily was our first interview of the day. She came in and was so happy to see so many women in a room and was eager to get started.

You play a woman that kicks some serious butt. Can you tell us about your training?

It’s just a lot of working out really. I mean I had already sort of done some training for Revenge so it was like an easier segue into the films but, you know, you wanna go into these movies feeling really strong and feeling fit and I wanna be able to keep up really. So, were wrapping Revenge while I started training for the movie which is very interesting and I kind of realized how much I should have done that for Revenge. I mean I was fit doing Revenge but I was like oh, this is another level. I was a dancer so all that physical activity’s great and sort of helps with the sequences and stuff ‘cause ultimately it’s choreography. I hope to get to do more of it.

Was there any scene that was particularly difficult for you?

I wouldn’t say difficult. I think in these movies you just don’t wanna screw it up, you know, what I mean? Like everyone’s bringing their A-game. I was saying earlier, it’s very rare that you go into a movie almost already knowing it’s going to be great and successful because just historically they’ve been so successful. So you wanna bring your A-game. I was in Winter Soldier but not very much. It’s always a little intimidating. There’s that nervous factor before you go into it but everyone’s so kind and generous. The Russo Brothers have always made me feel so comfortable. So I wouldn’t say difficult, you just wanna do the best job you can. 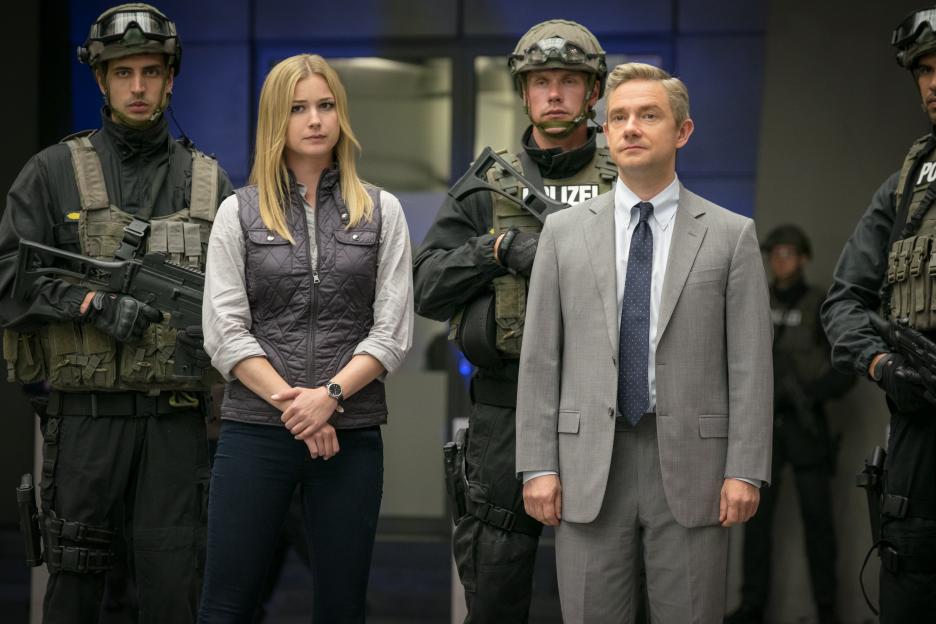 It’s got to be a pretty cool feeling knowing you’re gonna down in history as Agent 13.

It’s really cool. I mean being a part of this universe is really a special thing especially with the movies that Marvel is making and how good they are. It’s really, really cool and I’m really happy to do it with the people I’m doing it with because as I said everyone’s great and super talented. These movies could have been very sort of surface level but what I love about Marvel is how they delve into the characters. They sort of give us the freedom as well to create a version of the character that hopefully the fans will like and it’s a really fun process. So the fact that people love the movies is like an extra bonus, you know.

Let’s talk about Sharon, what is it that drew you to taking on that role?

What I love about Sharon is her moral compass. I think she has a really strong moral compass and I think that’s what her and Steven initially sort of identify with each other and ultimately in the comic books, it led to a very complicated relationship. But there’s gotta be something that sort of brings them together as well as their love of Peggy Carter. I think there’s an initial trust there that maybe he doesn’t have with anyone else and maybe she doesn’t have with anyone else. So I really enjoyed that but I mean in terms of what I identify with I mean I love a girl with a strong moral compass and a lot of integrity and I think she really has that. I think you see her struggle with that within this film because she’s battling her work and her loyalty to her work. The cats rebel against that and it’s like is she gonna follow her head and her heart. We ultimately see what she does but I think people can relate to that that struggle. 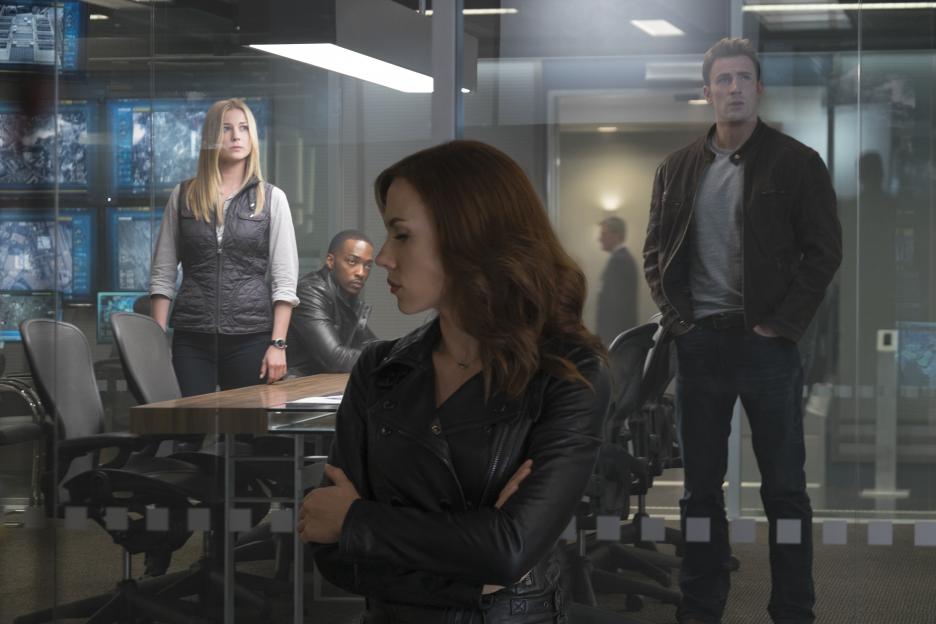 You’ve shared how much you enjoy bringing a female part into a very powerful position. So I’m curious to know if you had a favorite superhero growing up?

It’s really interesting. Someone else asked me that recently and I was trying to think of like a superhero that I looked up to (growing up). I mean I was obsessed with the Ninja Turtles, I’m not gonna lie. I was one for like four years in a row for Halloween. I was trying to figure out if they count as superheroes, I don’t know but that was my thing. I mean they probably inspired some of these characters I really like to play, I don’t know.

I wanted to be the Ninja Turtle. I think I was like Donatello one year and then  Michelangelo for like three years ‘cause I love pizza, I don’t know. 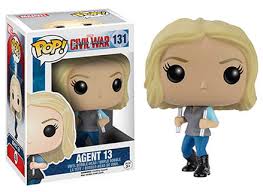 How does it feel to have a POP figure?

I was just noticing this. I never actually saw it out of the box. It’s hilarious. I think she’s pretty cool. I mean that’s awesome. I mean I gotta get one for my mom or something. That’s really cool.

With the connection to Peggy Carter, do you think the red hat become a trademark feature for your character in future films?

Did you have to do a lot of prep work for the action scene?

I mean I really only have one proper fight sequence when she’s going up against Bucky. I probably didn’t need to do as much training as I did but I mean they have the most incredible stunt team ever and they sort of get you to a place where you’re really, really comfortable with the movement and you work it. I mean it’s always challenging but it’s a lot of fun, to be honest. I really love it.

Can we talk about “the kiss”?

Yeah, I mean it’s kind of refreshing to see Captain, in a more intimate situation. They have chemistry, it was there even in The Winter Soldier. I would say it’s kind of nice to see it finally happen.

So this group is divided Team Cap and Team Iron Man. Without spilling the beans on which side Sharon takes, which team are you on?

Well, I have to be in Team Cap. I’m traveling with Team Iron Man on the press tour, and the truth is Sharon is very torn. I mean she’s got this struggle in this movie where she’s like, sort of on the sly, giving information but trying to keep her job. So I guess for the viewers it could potentially go either way. I think for me to say I was anything but Team Cap would be massive problems but I also I agree with him. I do agree with him and watching the movie I was kind of really trying to put my, take myself out of it and my sort of personal connection to the character and sort of think okay, well what do I think and I really get what he’s doing. I truly do.

How do you feel that you’re gonna be a role model for young girls because you’ve always been a badass?

I think especially in anything you do, I always hate it when I hear, actors or musicians or people in the public eye say that they have no obligation to be any sort of role model. I mean it’s not like you have an obligation but you have a choice and why would you choose to empower young women and sort of just use yourself as a vehicle when you have a voice to kind of inspire that. I don’t see why you wouldn’t. I mean that’s not to say I’m always gonna play this kind of character. It’s amazing to play a kickass girl like Sharon or a really tortured version of a woman when I played Emily Thorn. I just did a film called the Girl in the Book which is much more sort of rooted in reality and much more real. But I also think she in her own way is strong and on her own adventures so it’s just I don’t know I tend to pick characters that have those elements to it. But I guess in terms of being a role model, it’s not a responsibility but it’s something that I feel connected to. I have three sisters. I have wonderful women in my life and I just want to see girls have the best opportunities they possibly can and if I can inspire that in the tiniest way I don’t see why I wouldn’t.