I didn’t get to share the whole interview that I had with George Clooney for he wasn’t too good about not sharing some spoilers. I forgive him.  Ha!  This just means I get to give you a little more George and Tomorrowland. I could thing of worse off posts to have to write. 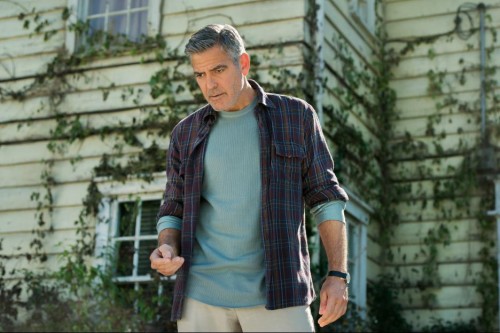 So, if you haven’t gone to see Disney’s Tomorrowland (why haven’t you???) starring George Clooney, Britt Roberston and Raffey Cassidy yet, you may want to read the first part of the interview first, and then come back to see what else George had to share about working with his co-stars and if there were any scenes in the film that were emotionally hard for him.  So if you have already gone to see the family summer movie like no other, please read on.

I loved how your character interacted with your co-stars Raffey Cassidy and Britt Robertson. What was it like working with such young and talented actors? 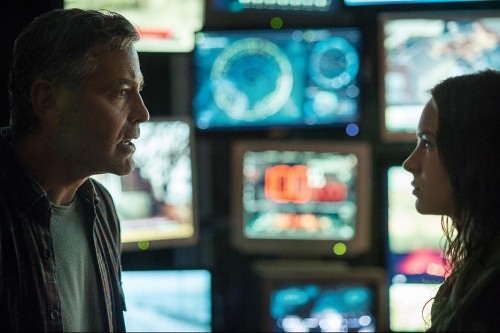 He kinda leans in as if he is about to let us in on a secret.

Now, we can say nice things now, but the truth is I don’t care for them.  (Laughing)  Well, first of all, Britt is fantastic and her career is just at the very beginning and is going to be really fun.  Raffey is spectacular and she was just 12 at the time, I think, and way too talented, for her age, and sweet and funny.  Ah, it is also a fun part for me because I, as you well know, if you’d seen me speaking to a 12 year old the way I speak to her at the grocery store, you’d call child services. (Laughs) I’m like who gets to yell at a 12 year old. I mean yeah, teachers do.  But in the movies it’s, it’s so much fun because, you know, she’s not really a 12 year old and it’s really, it’s fun to be able to, ah, they sort of set up a way where, you know, we’re a little family of three, but she’s the adult, you know, driving the car and and Britt and I are the two kids, arguing and bickering all the time. They were fantastic, and they were really sweet and they got a, and I think they’re having a really fun time with this, which is, you know, that’s how it’s supposed to be.  You know when I work with younger actors, I always have to try to remind them that, you know, this is, this is the fun kind of job that most people don’t get to do.   And if you get to be an actor and work, and somebody pays you for it, you’ve caught the brass ring, you know, and it’s just fun.  So, that’s part of, the thing is, they really do dig it and they’re having fun, which is really a good time.

What was your favorite scene or favorite fun memory while filming Tomorrowland?

And the jokes continue!

I don’t remember much of it.  I was drunk most of the time.  (Laughing) You know, I will tell you, there was a lot of moments, because you know, it wasn’t all done to green screen, you know.  They were nice enough to build a lot of these sets where you actually got to play in them. The most fun we had was the driving sequences, believe it or not, because, you know, we’re being towed but Raffey is driving and, you know, I keep having to teach her like, you’ve got to keep looking at the road, I mean. And she’d be like, you know, (talking like a 12 year old girl) ‘what is the deal’?  Like my mother actually drives, which is true, it was fun because there was no technology.  There was nothing.  It was just old fashioned, three people sitting in a truck for five days, arguing and doing fun stuff.  And that’s really fun for actors, because you don’t have to do any make believe.  It’s all just right there.  So I really enjoyed that.  And also it was fun doing the stuff, you know, like shoving all the packs of powder down their, throat because we must have done, I don’t know, 30 takes, and every time I go, here you go.  (Laughing)  And she’d be like not the whole pack. And I was like yeah, so much sugar on it.

Did Britt really drink all those bottles of Coke?

Yeah, now in fairness, Brad was kind enough to only do it, I think, three times.  But she does down two cokes in the take.  I think it’s two cokes in the take. And, and I was like, just sitting there going, you know, she’s gonna explode, but she did it.  Because you learn, like young actors (just kinda go for it), I remember when I was doing Descendants and we had this little girl, she played my youngest daughter in the film, and we did a scene where she gets to eat ice cream, and she never acted in a movie before and she just starts pounding the table. And they’re just sitting there watching her going (shaking his head), you can see her, take 9 (Laughing and looking full) and she literally was like uuugh.

Where there any scenes that were emotionally hard for you to film?

Emotionally hard, no. Because I find, movies in general aren’t emotionally, I mean, you know, you’re involved in them but it’s not really something honestly terrible has happened, you know. It is still make believe but I did find that, there was a tricky scene…there’s a moment where I have to let, Raffey’s character go, the robot go, and that was a really weird.  We’d shot it once and she kind of clicks out, but her eyes are open still and we drop her out, and it literally feels like I’m murdering her, you know.  It really does.  It was odd.  And you’re watching it, it’s so disturbing and it was really awful, so we went back and re-did it where she sort of completely goes out, because otherwise it really felt horrible.  There’s all kinds of weird balances in this film.

Referring to his relationship with Raffey’s character being one that started when his character was a child and kinda had a crush on her, but he grew up, she being a robot, never did. 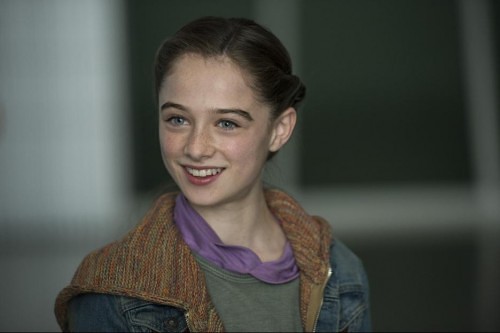 My relationship with her is very…we’re walking a very thin line there, like I don’t know, this is kind of weird. And it’s a constant thing like oh, oh boy. Let’s walk very carefully through these things. And thankfully, Brad is Brad and is really good at what he does.  He made it much simpler.

You can read the rest of the interview with George as well as Britt, Director Brad Bird and more by visiting my Disney tabs.

*I was invited by Disney to cover the Tomorrowland Event.  All opinions are my own.