My friend Naomi shared a story with me recently about her special friend Jake Law. He’s had a rough go at life and his mom, Ginny Greifenstein, has been trying so hard to grant her son his one big wish of meeting the man that makes him smile most, Garth Brooks. Below is a letter that Ginny wrote in hopes of getting in touch with the right person to help her in her quest. I am hoping through this blog post and with shares via social media that this reaches the right person in helping make Jake’s dream come true. 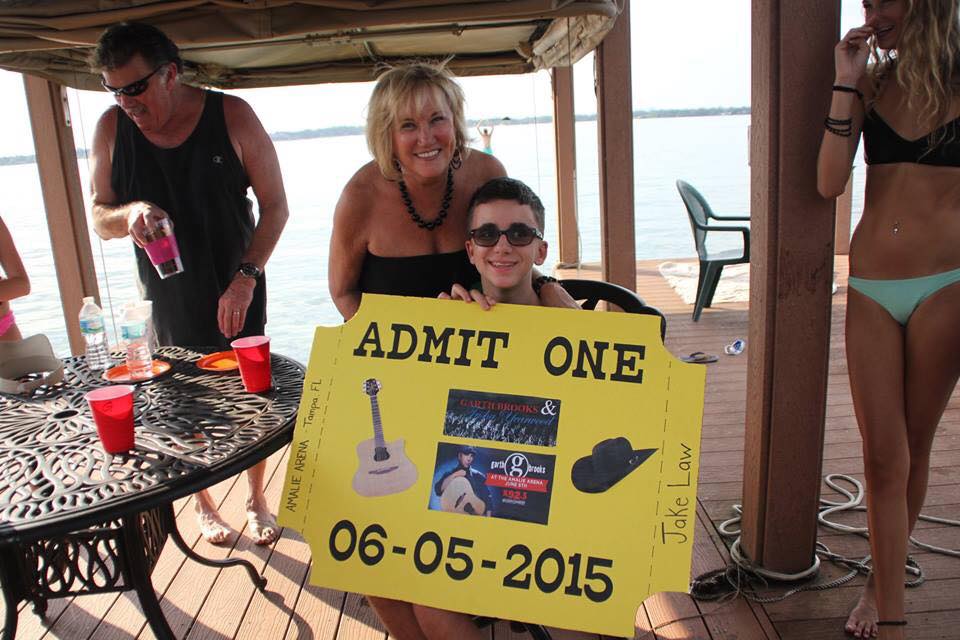 My son is 15 and has Cerebral Palsy and Epilepsy. He has had the most challenging (WORST) 2 years of his life starting in 2013 when he got a hemispherectomy, which was supposed to stop his seizures. It did not and less than a year later was diagnosed with hydrocephalus due to the surgery. In Sept of 2014 he got his first shunt and since then has had 4 shunt revision surgeries due to shunt failure and malfunction, and a 5th surgery is in our future. Jake is such a positive kid and everyone around him loves him…even his doctors comment on how he always has a smile on his face and makes them laugh. A positive in his life is music and he loves singing karaoke and listening to Garth Brooks. As his mom I just want to put some positives back in his life of in and out of the hospital, and I wondering if he’s a candidate for a wish? Hes never been to a concert before and I know he would love to see Garth Brooks when he comes to Tampa this year.

That show in Tampa was cancelled due to the hockey game, so they have decided to take a road trip to Louisiana to catch his next show.

#TAMPA: ALL 3 PERFORMANCES OF THE GARTH BROOKS WORLD TOUR @AmalieArena HAVE BEEN CANCELLED. Msg from Garth http://t.co/1BafWanXhS -TeamGarth

This is the message I received from Naomi –

Hey! Can you still help me with Jake meeting Garth? We have tried everything for Jake. Jake had emergency brain surgery yesterday but we are scheduled to drive to New Orleans on Friday July 10 to go the concert on Saturday July 11th @ 7:30.

Unfortunately, Jake isn’t going to make it to the concert this weekend either. He had to have his 12th brain surgery yesterday. Ginny wrote, “He had his 12th surgery today and came out of it like a trooper like he always does. His surgeon even played Garth Brooks on Pandora for him while he was in the operating room-he was mad because the only song he got to hear was a Tim MacGraw one before they put him to sleep. If this hypoallergenic tubing works he could have his 13th surgery sometime next week and would be out and better – if not we’re back to square one and that’s not an option. This kid has missed so much of his life lately – and now we’ve had tickets to 2 separate Garth concerts that he hasn’t been able to go to. So sad!”

With the latest set back, they are now planning for one of the October shows in Jacksonville. For very obvious reasons I want to do all I can to help out in this situation. How can you help? Just share this post. Maybe we will get to the right person in Garth’s camp.

If you are able to help, please fill out the contact form below. Thanks so much in your help in making this young man’s dreams come true. #JakeMeetsGarth