Javier Bardem as Captain Salazar in the new Pirates of the Caribbean: Dean Men Tell No Tales. Not only is he the perfect villain, but he also has the coolest post-production effects in the film. Javier won an Oscar portraying assassin Anton Chigurh in 2007’s No Country for Old Men, contended with James Bond as Raoul Silva in 2012’s Skyfall and is currently on a quest to capture Jack Sparrow. In this very candid interview, learn about getting that dead look, falling for Johnny’s cute butt many years ago, and how his wife, Penelope Cruz had a hand in him getting the role.

Javier walks into the room greeted with a huge applause and damn, he looks good!

Oh, my God, I’m so scared right now! (Laughing) Oh my God! I thought it was just a woman or two.

Mommy Bloggers? Well, does that mean that you are all moms? All right, that’s good.

We are all moms, and we all write for our own blogs.

We’ll take it easy on you. We’re safe.

Thank you. I’m a daddy so don’t be too tough on me. (laughing)

I want to know how long it took you to get makeup every day and what the black stuff was that pours out of your mouth.

Way less time than it takes to you all. (Laughing) Three hours.

Wow. How was it talking through the black goo coming out of your mouth?

That was, as I called it, monkey poo. (groans) It was a liquid. They told me it was supposed to be like chocolate, chocolate my ass. (laughter) That taste worse than that, and they were supposed to put it on the teeth. I said give me that, so I drunk it and then I went to play the first scene, I think it was with Geoffrey Rush, and it starts to pour out of my mouth, and he was very disgusted. (laughing) And I figured it was like a rage pouring out, right? It’s not blood. It’s like the rage of the character coming out, like something more physical, like a bull. I’d always thought the character was like a bull, like a wounded bull with the blood and like moving like wounded and breathing like out of breath and with an adamant idea for revenge towards Jack Sparrow.

You had some intense emotions during the film, was it difficult to portray the emotions through all of that makeup?

Very good question, that was one of my concerns to see if my facial expression can go through the mask, but these guys which names I don’t remember now, and that’s bad. These makeup people won the Oscar for “Mad Max.” They are young, from Australia, and they did an amazing job. Once I had the mask on the face, I realized that I could express myself through it, which is important. Otherwise, your performance is killed by it.

And, one of the things that these special effects people have done so well in this movie is that they brought magic into the performance without killing it, like the hair, it’s fantastic. I think we have gone maybe more or stronger on it, but they are writing this in the right place, so it’s there, but it doesn’t kill the physicality of the performance.

So, how did you become involved in the project?

I got involved back then in 2010 because Penelope was shooting “Pirates 4” so I went to the set in Hawaii, a beautiful place. Also Los Angeles and London, and I was very envious. I was very jealous because I was seeing all this amazing production taking place, the water, the special effects, the boat, the sword fighting. I wanted to be one of those. So, I talked to Jerry, “Jerry, please, give me a job.” (laughing)

It was that easy?

No, I said that because I thought that he was going to say yeah, right, but then he called me five years after. I was so surprised and honored because as a movie goer, I love the franchise. So, I knew that production wise and experience wise, it was going to be great. Then it was a matter of what’s the story and what can I bring to the character. When they gave it to me, I thought it was this great thing about one same character played in two ways.

When he’s alive, it’s all about pride, and it’s all about honor and when he’s dead. It all about betrayal, pain, and revenge. I liked it. And it’s a Disney movie. You have to bring it up. You have to lay it up because it’s a family movie but even though I think it’s very powerful. It has some powerful moments.

And your performance as well. It was powerful. So, whenever you saw yourself after all the CGI can you tell us about what that was like for you to see?

Yeah because I was working a little bit on the darkness. Not with the makeup because the face I could see. But the hair, they showed me some pictures and videos. It was like yeah, right, looks great but how is it going to look like at the end? So when I first saw the movie, having in mind that the whole movie was shot in a studio. So I didn’t see that ship in the sea for a second. That’s not true.

There is the scene on the beach when they’re escaping from the sharks, and I’m getting close to the shore. That was an amazing beach, a natural park called “White Sand Heaven” in Australia, beautiful. Crazy, the sand is so white and — but the rest was in the studio, and when I saw the movie, it’s like I’d been on the sea forever. (laughter) And what I most was amazed by was that the sharks! Yeah, it was done amazingly well.

You’ve played some pretty out-there villains in the past, did you pull inspiration from previous roles?

I tried to see what’s the thing that makes them different from each other and I’m saying that because I haven’t done so many villains. I’ve played three, which is “No Country,” “Sky Fall” and this one, but I guess the movies are very powerful. They are different genres. “Sky Fall” and this one similar in some ways because it’s a fiction world, fiction in the sense that if you play a villain in James Bond or here, you have to, as I said, before bringing it up a little bit because people are expecting that.

When “No Country for Old Men” was a drier movie, a drier story and more yeah like rough. The only thing that I was inspired by was the idea of this wounded animal. Also the idea that in those times, the Spanish army was very powerful in the seas. The captains were from the south of Spain, and the south is where the flamingo is, the whole bullfighting culture belongs to, so I wanted to bring some of that flavor into the character. For a foreigner, it wouldn’t be that obvious, but for a Spanish audience, I guess they will get a little bit, a little bit of a glimpse into that.

I met him in 1999 in Mexico in Vera Cruz doing a movie called “Before Night Falls” by Julian Schnabel. It was an inventive, beautiful movie about a gay, Cuban poet that was imprisoned by the Castro regime then he came to states. A very important figure in the Cuban culture, also in the gay community. There were two scenes that he came down to play for us as a favor because he knows Julian Schnabel.

In one, he’s playing this very strong Cuban general, and another one, he plays a drag queen Bon-Bon, which was a real person who was basically, I don’t know how to say that in English without being inappropriate. She was a drag queen that was very known in prison in those days because she will put all the manuscripts inside her rectum. Then she will go out of the jail and then she will take them out, and they will be published, and that’s a real person.

And then I said that to Johnny. I said, “I don’t know you, but you’ve got a great butt.” (laughing) And then since then, we’ve been good friends, and he was a gentleman then. He was super nice, very caring, very funny, and didn’t give himself too much importance at all.

I remember that it was so hot, we were sitting on a roof and it was summertime. It was 3 p.m. People were like fainting out of the heat, and there was only one umbrella, and of course, the production went running to Johnny with the umbrella and he was like, “No. The umbrella is not for me. The umbrella is for Javier because that’s the guy who has to keep shooting when I leave. You need to protect him.” And that was without making too much noise about it, but I saw that, and I thought that talks a lot about him.

And when I do the movie now, in 2015, he was the same guy except that he’s playing Jack Sparrow which is an iconic character. He’s talking normal, then rolling, boom, he becomes Jack Sparrow. He’s so funny to watch, and he will do and say anything, and he will be brilliant. I had to cut sometimes the scene because I was laughing (laughing). He’s a great colleague and a beautiful guy.

Did you play rugby?

European rugby, yes. I was captain of the national team. I think rugby, it’s a great philosophy on the field. First of all, the referee is God. There are rules to follow. In rugby, there’s no such thing as football, like you are one of the team and that’s the same as a movie set. I’m always saying that because I played rugby for almost 20 years, I know what a movie set is. You are part of the team, and at the moment where you think of yourself more important than the rest, everything is going down. The goal, the aim is destroyed, which is bring the ball to the side of the line. 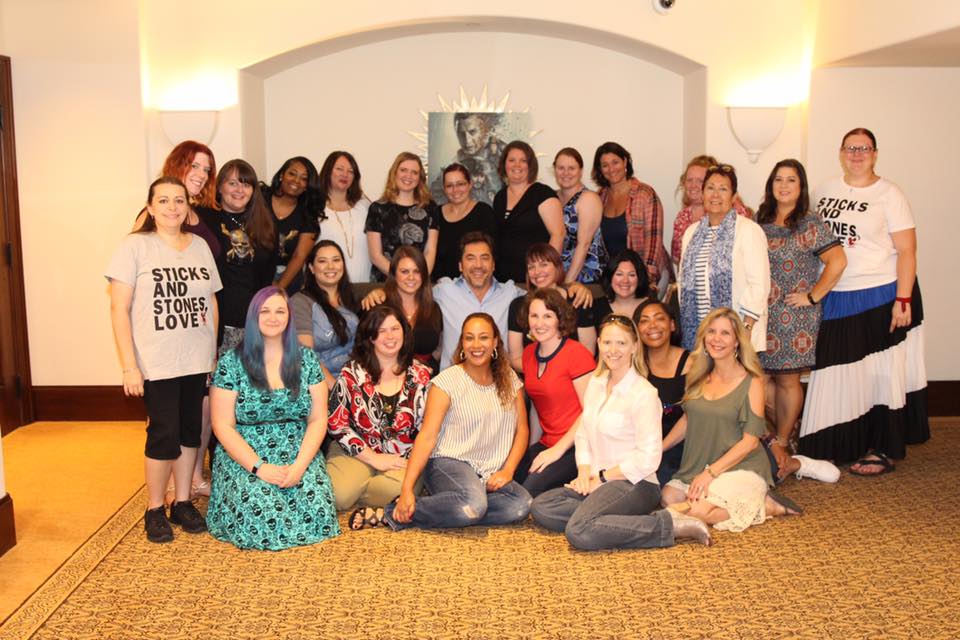