Even after interviewing Chris Evans about his role in the latest Marvel film, Captain America Winter Soldier, I can’t help to want to hear what the mastermind behind it all has to say.  Kevin Feige is not only a producer on the new film, but he is the President of Marvel Studios.  A big job for someone that has a fan base the size of, well more than one universe.

The first time I got to interview Kevin was last year when he gave us a look at Iron Man 3.  It was then that I got a taste of his contagious excitement.  His love for Marvel and keeping true to their stories, Kevin makes sure each film is better than the last.  During my press trip to LA I had the opportunity to sit down and feel his excitement once again as he talked to us about Robert Redford wanting to be in the film, Marvel’s Guardians of the Galaxy and what’s up next? 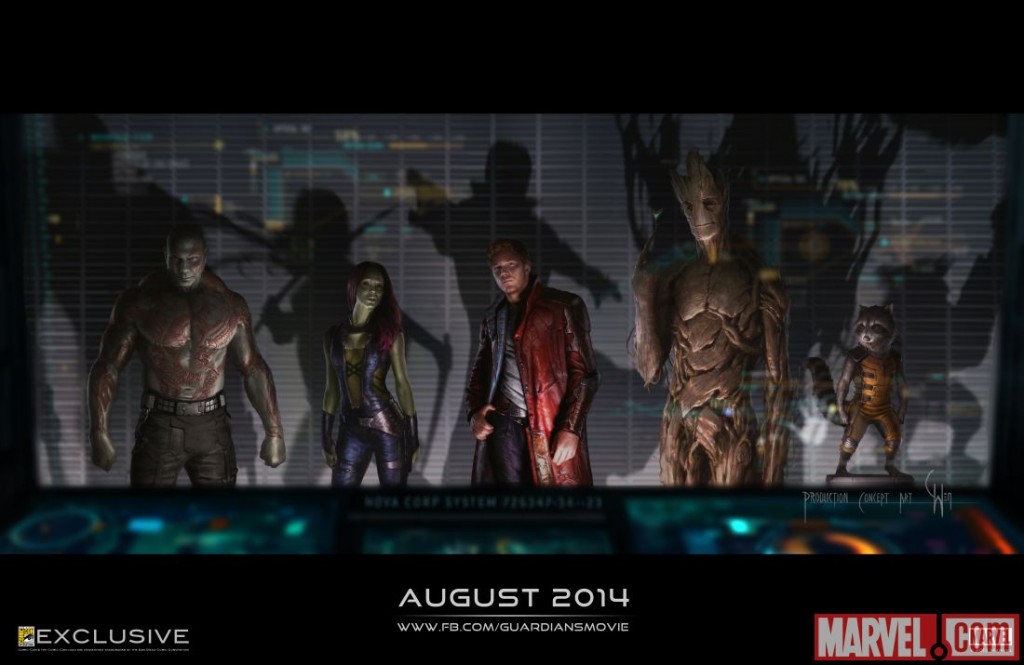 Q:  Can you tell us what comes next?

KF:  We’re spending a lot of time now in the cutting room on “Guardians of the Galaxy” which comes out August 1st.  We just released the Teaser for it recently.  And in about 2 weeks we start filming “Avengers Age of Ultron”.  So that’s coming up very fast and that will be the next Movie up in May of 2015.  And then in about 10 weeks, we start filming “Ant-Man” with Michael Douglas and Paul Rudd and that comes out in July of 2015.  We haven’t announced what comes after that in 2016/2017 but we’re actively working on any number of things and are beginning to hone in on sort of exactly what the Movies will be in ’16 and ’17 but it’s slightly too early to talk about.

Q:  What problems did you have on the Big Screen vs. the Comics?

KF:  It has never been done before which is, you don’t get a chance very often to do something in this business that’s never been done before, 100 years of cinema.  Now somebody will point out somewhere they’re done it before but your point is taken.  And that is what the comics have been.  It was a shared Universe from its inception essentially in the comics.  And when it was sort of character by characters, studio by studio, that was impossible but when we became our own studio and the financing to do that, it was the first idea was make a great Ironman movie, and the second idea was wait a minute, we can begin to tie these together.  The biggest challenge is the continuity and that inter-connectivity broaden the audience as opposed to make it feel like a club, making it fold in on itself and say ,oh you need to know everything that’s going to see any of these movies.  We work very hard to make each of the movies feel like a stand alone movie, but at the same time connect to everything else.  I wouldn’t say that’s the biggest challenge but that’s been our sort of our Mission Statement and that’s what we try to stick to. 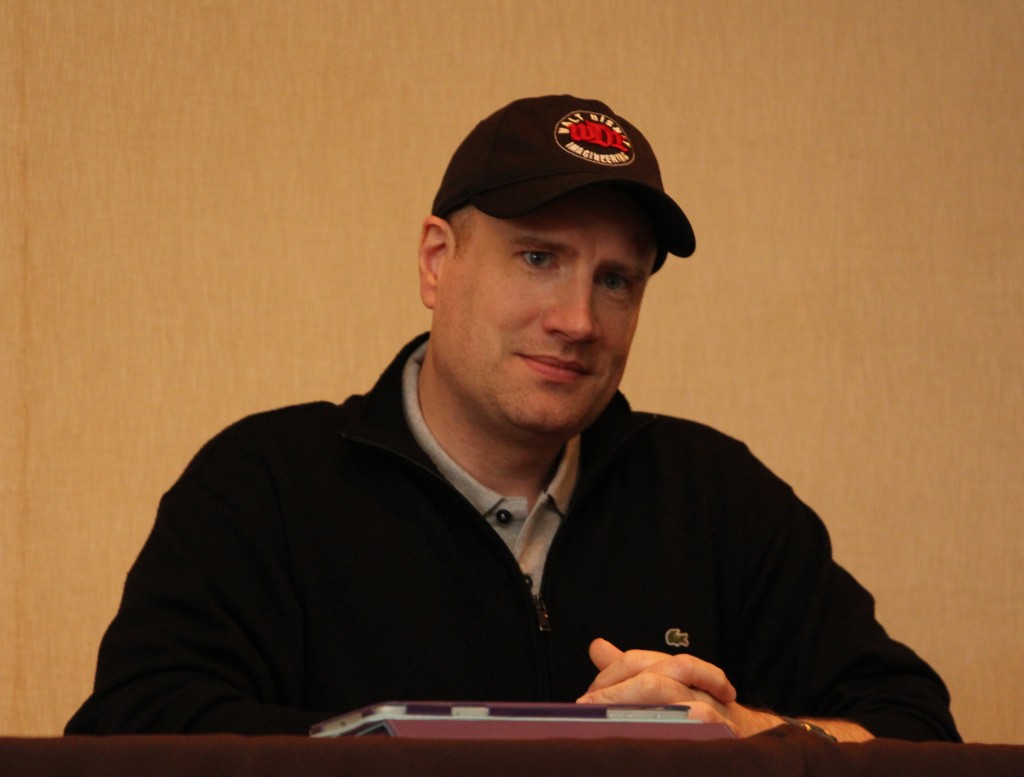 Q:  Are there perks with working with Celebrities?  Like do you have Iron Man at your kid’s birthday party?

KF:  That’s very funny.  No.  The only favor I want is for them to do the Movie and to do an amazing job in the Movie and they have done that up to this point.

Q:  Talk about the controversy around Winter Soldier

KF:  You know, Comic Fans always knew sort of two things about peak characters, (they) die and come back to life in comics, like in soap operas, like in any sort of fiction all the time.  But there are two characters in the Marvel Universe that are never gonna come back to life, Uncle Ben and Bucky Barnes.  And about 10 years ago or 12 years ago, a comic book writer, Ed Brubaker went to publishing and said, “I have an idea to bring Bucky Barnes back”.  And I’m sure they’re like what are you talking about?  You can’t do that.  And they pitched the idea and it was great.  And it was the Winter Soldier idea and it was done so well.  And you’re right, I think Fans went, “No, you can’t”, or “Oh that’s great, we love that”.  We just took the successful blueprint that they had already done and brought it into this movie.

Q:  Is there any hope to get other Characters with other Studios?

KF:  No.  SONY’s busy working on Spiderman movies, Spiderman II is coming out very soon.  Fox is working very hard on X-Man and they’ve got an X-Men movie coming out very soon.  And we clearly are spending a lot of time doing our two movies, two Movies a year.  I don’t want to say never necessarily but I don’t know that that would happen any time soon, and we’re certainly not planning for it.  It’s Phase 12.

Q:  Will we be surprised?

KF:  Well I think you probably will be and I think if you tune in after the movie comes out, the repercussions will be felt.

Q:  It does trickle through.

KF:  That’s the idea.  This script, the idea for this movie exists before the show (S.H.I.E.L.D) so they know what we’re doing. 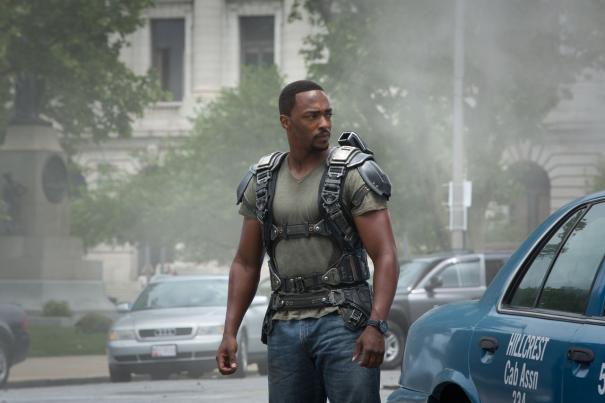 Q:  Talk about casting people who know what’s going on.

KF:  It varies.  I mean sometimes we do, and sometimes it’s just auditioning actors.  Frankly, with Anthony Mackie that’s a case where that’s who we wanted.  That’s who the Russos wanted.  We thought he’d be great and he agreed, and then he was great, which was nice.  Sometimes it was getting a call from Mr. Redford’s agent saying, “do you have anything that might be good for him and we went holy mackerel, we sure do.  We made some adjustments to that Character to increase his stature and to make it worth Robert Redford playing it.  But often times, it’s just meeting with people and finding people who are interested and you know, Michael Douglas, on “Ant-Man” and Paul Rudd, both were sort of first choices in terms of the characters they’re playing for us.  And it’s gotten very nice now.  You know, 9 Movies, 10 Movies into our Cinematic Universe that people seem to be excited about joining us and seem to trust that they’re not gonna look silly in a costume or talking to a comic book character that they realize we take this very seriously and when somebody like Robert Redford or like Anthony Mackie or any of our actors sign up, that’s a big responsibility for us the film makers to go – they’re gonna bring their best to this movie, we have to bring our best to the script and to the production and to the final product.

Q:  With the backlog of films, do you find this to be a challenge or is it easier?

KF:  I don’t know if it makes it easier.  It’s a bit of a challenge but it also is just fun.  You know the challenge frankly as I sort of eluded to before is not to overdo it.  As you know until the movie comes out, (Spoiler) we’ll reveal that there are goings on at S.H.I.E.L.D. and we want to say hey, what if a US Senator was part of this.  Well we have a US Senator and he was in one of our movies, Gary Shandling, let’s bring him back.  Let’s see if he might be willing to do it and he absolutely was and he flew to DC and shot that for us.  So now as we get into approaching a dozen movies now, it is fun to go back and to connect dots, in ways that you would do anyway.  If we hadn’t, if this was the first movie we ever made, that would just be a Senator.  But we have 10 Movies behind us, let’s have it make sense within that Universe.

Q:  What are you most excited about?

KF:  Uh, I’m most excited about, I am most excited about how the world reacted to that teaser, which I’m very, very happy with because that teaser represents the tone and the vibe of the movie quite overtly.  So we were sort of leading with our most unique and different element, which is not always what movie markers do.  They sort of go, oh hey look, it fits into this box, and get comfortable with an audience, and there’s a surprise.  But we were leading with what the most unique elements of the movie are which I’m very happy with and more happy that people seem to be on board with it.  As we’ve been talking about today, each Marvel Studio’s movie needs to be unique, needs to feel like its own fresh entity but Guardians takes that to the extreme, I mean, it really is I think, more different and a fresh original movie.  It happens to be based on a Marvel Comic Book but for all intensive purposes though, from an audience who has no idea who those characters are from the comics, it is an original movie put out in the time and certainly the summer where there are a lot of sequels.  There are a lot of remakes, so I hope people are as excited as we are to see something wholly new and wholly original.  That’s what I’m most excited about.

Q:  Do you hope that Guardians becomes a series of Films?

KF:  Well sure, I mean, it takes place on the other side of the Galaxy but at the same time, there are elements in it that quite directly link it into the other movie so it absolutely is a part of our Cinematic Universe.  But the truth is we make every movie one at a time so we’re putting everything we have into that first movie.  Are there other stories to tell, are there ways we could take them on other adventures?  Absolutely.  But we never find ourselves going, oh, this is a great idea.  Let’s save this for part 3?  No if you don’t put it in here, there won’t be a part 3.  We need to put all the great ideas in the movie at hand.  So that’s where all of our energies is going right now into Guardians.