Put a group of good-looking kids on the Disney Channel with a fun storyline, you may end up with a hit show. MECH-X4  stars Nathaniel Potvin, Kamran Lucas, Pearce Joza, and Raymond Cham and during we had a chance to screen the new show and chat with these young actors.

When high school student Ryan Walker discovers he has the ability to control technology with his mind, he awakens 150-foot robot MECH-X4 and is able to control every move the android makes. The situation gets to be too much for Ryan to handle on his own, though, when another monster starts attacking the school. That’s when Ryan recruits older brother Mark and friends Harris and Pearce to help operate MECH-X4’s defense system while he pilots the robot. Together, the haphazardly assembled team of heroes must quickly learn to work together in order to save the school — and, ultimately, the world — from being destroyed. That’s a lot of pressure to put on some teenagers.

MECH-X4 on the Disney Channel

Steve: Every step of the way through development, it sort of evolved. Like, wouldn’t it be fun to actually have great special effects? Wouldn’t it be great to do it single camera and make it look like a movie? And then wouldn’t it be great, in this day and age, where storytelling is binge and serialized, wouldn’t it be cool if we could do a long story over a season? So it started with an idea, Disney went for it, and then all of a sudden, this great team started coming together and bringing everything to it.

How, if at all, are you like the characters you play?

Pearce: “I like to say I’m like my character and not like my character. Spyder’s very crazy and he likes to do a lot of daredevil stuff-type-things. And I lived in Colorado for a long time so I like to go out back and play in the pond and climb trees or whatever. I also love school. I’m taking college level courses and Spyder’s not very good at school.”

Nathaniel: “I’m kinda like my character because Ryan is always rising to the occasion. So whenever he has to fight a monster or even stand up to his brother, I’m kinda like that in some ways. Also, I have two older brothers so I know exactly what Ryan goes through on a daily basis. And, Ryan loves to skateboard. I love to skateboard. So there are some similarities between us there.”

Kamran: “Harris and I are pretty similar in like book smart terms. But not so much. More of like we both dress really nice and we’re both ladies men.” [lots of LOL]

Raymond: “Oh, how do you follow that? I’m kinda like my character in a way. When it comes to family I’m very protective… I care for my family and I’ll do anything to protect them and make sure they’re okay. I’ve also dabbled in sports a bit. When I was around eight or nine, I used to play basketball. But, other than that, I’m not too similar.”

If you could have any super power…

Raymond: “Shapeshifting! It’s the craziest. Boom, I wanna fly–I’m a bird. I end up in the water–I’m a whale. I could be anything. I think about it all the time. Maybe too much… Everyone’s like I wanna fly. WHAT? That’s it?! That’s all you wanna do? I could do that. I could do anything.”

Kamran: “I kinda wanna have the ability to stop and turn back time… I want to change something when I was younger. I was at Legoland and this girl pushed me. I was really mad because she did it for no reason and I just want to go back and say, ‘Hey, I’m on Disney Channel now.’ [laughter] I’m not like that in real life. Just to that one person…”

Nathaniel: “If I had a superpower it would probably be teleportation because who wants to pay for airline tickets? No one. No one does. Also, it would just be really convenient. If I got locked out of my house I could just teleport inside my house.”

Pearce: “Telekinetic powers. It’s pretty much being able to control anything you think with your mind.”

What are your favorite things to do on your days off?

Pearce: “Snowboard… I was on the Junior Olympics team in Colorado.”

Nathan: “My favorite thing to do offset is to go rock climbing.”

Kamran: “I like to sleep. So late. I like to be in my bed and just not do anything. Yeah, sleep is great. Everyone should have a lot of sleep. I got a solid twelve hours one day… Yes. Sleep is awesome.”

Raymond: “I wanna say something crazy like skydiving or something like that, but really I just sit home and watch movies. That’s all I really do. I mean sometimes we’ll go go-carting, which I really love doing. But yeah… I love watching movies just to study [the acting].”

What movies? Anything specific?

Nathaniel: “Interstellar. Interstellar is one of my favorite movies. I love sci-fi. I love dramas. I love all genres. Sci-fi is really awesome…”

Kamran: “One of my favorite movies was Big Fat Liar, which was with Frankie Muniz and Amanda Bynes. I just thought it was a really good movie because it was about a kid who left everything to prove something to his parents and go on this whole journey of self-discovery… figuring out his place in the world. It was just a cool adventure. Watching it all I guess kind of inspired me too, to be an actor.”

Pearce: “Eternal Sunshine of the Spotless Mind. It’s, of course, with Jim Carrey, but it’s just amazing how it is comedy and drama at the same time, which is what I’m really into. I love comedy, of course, but I also wanna do drama some day.”

Nathaniel: “My favorite movie is Good Will Hunting. I just think it’s inspirational that these two guys got together and they wrote a movie together, and then they created something. And how they got this story and they went through a person’s trouble of being really smart and how he has to struggle with that. And my favorite line is, ‘I gotta go see about a girl.’”

What powers the show?

Steve: The thing that powers the show, I think, is the relationships between the kids; between the brothers and between the friends. So it always comes from that. While they have a mission, and that mission is to fight monsters, it’s more than that. It’s sort of like how they evolve as heroes. So yeah, you’ll see more than just robot and monster. You’ll see them evolve into becoming heroes hopefully themselves. 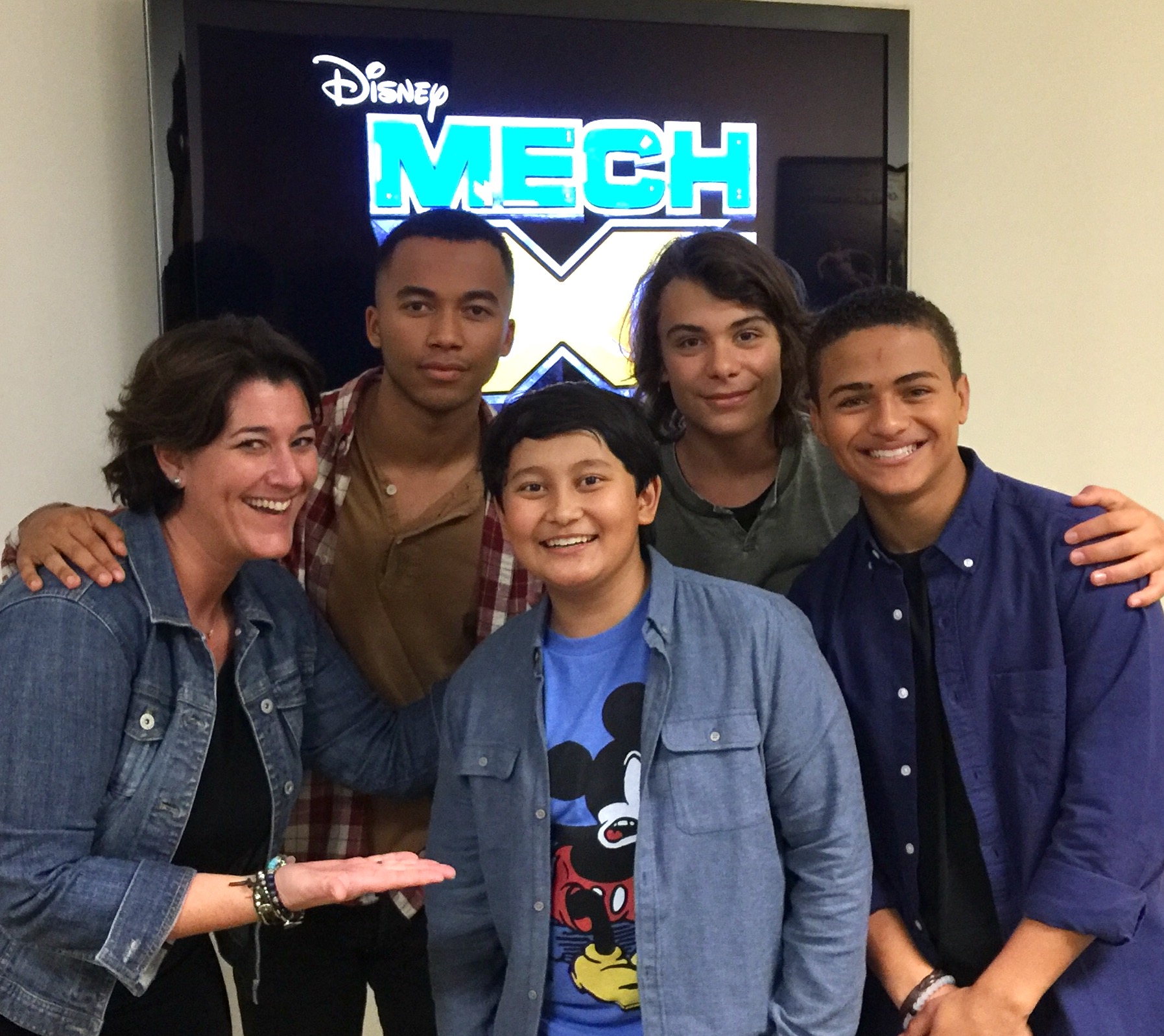 I was invited by Disney to screen and interview the cast of Mech-X4 on the Disney Channel to share my experience with my readers. All opinions are my own.