When a director gets casting right as Jame Gunn has with Michael Rooker as Yondu in Guardians of the Galaxy, it just makes a movie that much more entertaining. This was my first time meeting Michael, and just like Zoe Saldana and Dave Bautista, he was in full makeup during our interview. He also was, well, as odd as you’d expect. In a very entertaining way. When you’ve been doing movies as long as he has, I feel he may have earned the right to say what he wants. And he did. 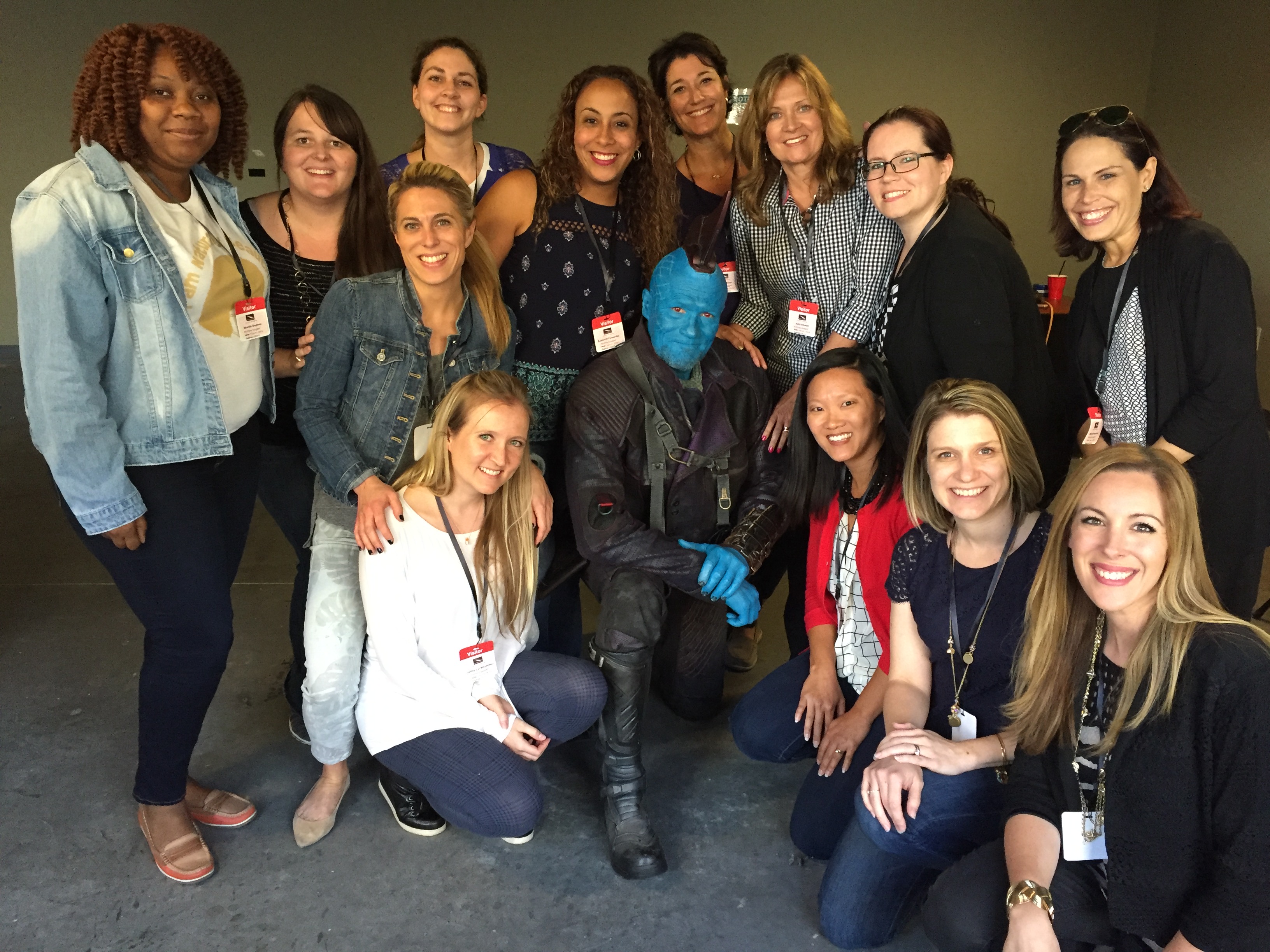 Michael Rooker as Yondu in Guardians of the Galaxy Vol 2

Michael Rooker enters the room, and he’s in full Yondu attire and he looks as cool as creepy. I wasn’t sure if it was because he couldn’t see good with the contacts, or if he was just wanting to take a good look at all of us, but he sure was engaging and full of chatter.

Wow. Let me look at you.

His eyes very intense with the contacts.

Y’all are purty. How about my eyes?  You like my eyes? These are not mine. They’re contacts and I brought my teeth too, just so you can see them. I’ll just do a little show and tell.

He proceeds to put the teeth in and smile, the whole look was intimidating and fun to see up close.

That is some good looking man there.

The room fills with laughter.

I do the same thing when I see myself in the mirror with it all on. We got to learn how to talk with these (teeth). So my voice is already a little bit throatal and it’s better if I don’t have a regular conversation.

So how long does the makeup take?

Is it all makeup? (Referring to his face.)

Is the new fin to the heavy?

Yeah. A lot of people like this fin, and it’s awesome. The fin’s not heavy. Not at all. It’s hollow. I thought they were, they were going to put practical lights and different things in it, but they decided not to. They just decided to keep it just uh, just natural and not, well natural. It’s, it’s a fin growing out of my head. So they didn’t put the lights in. If they’re going to do that kind of stuff, they’ll do it in post-production they’ll do that.

Is the fin part of the storyline?

Yes. Do you want to know the story is?  I’m not sure if I can or not. Maybe a bit because you saw my fin the last movie. It was a short little stubby thing. That worked but, that worked for my ship. That’s what they told me anyway. Well, your ship is low and you know, with a regular big fin, you would be hitting the ceiling. I was like, oh, okay. So I fell for that. Anyway, this time around I have a little of both. I have the short fin and this fin here, so yeah.

He seems more interested in talking to us for a moment.

Where you all from?

Wow. Well, thank you for hanging out. Cool.

Have you teamed up with some of the Guardians of the Galaxy?

They’ve teamed up with me. Please. I’m the one that can whistle and take out a whole army, okay?

How did you feel about that shift when you read the second script?

Oh, it’s a great script. You know, Gunn wrote it and it’s a continuation of Yondu in the first script. He wrote that for me, so he just wrote more odd things that I get to do and stuff because he knows me and he knows I’m a wee bit odd, so he just plays on it and writes some silly things. It’s not all silly, but it’s fun. It’s a lot of fun. I have a good time doing it and he’s a good writer. Great director and I was forced by to be in this movie.

Do you hope the audience sees a different side?

You do see there are some differences from the first one. You don’t get too in depth with the first one. We get to learn a bit more about Yondu and his relationship with Quill. I won’t tell you specifics because I don’t want you to know. Na na na na na. (Laughing)

Doesn’t seem like it’s too hard for you to get into character.

Nah, not too hard because it was really written for me, so he uses a lot of my ways I deal with things. You know, some little bits in there. I think the thing that attracts people and the audiences to this film is the first one. Because the characters are very human-like. We have our faults. We all think we’re better than we than we really are, you know? So yeah, I do. No definitely. He thinks he’s pretty cool.

Does your crew rebel?

Who told you that? I’m here to entertain you. I’m not here to give you any kind of information. Well our crew, my crew is a very violent and aggressive crew. I’ll just put it this, they always look for a weakness. They’re always trying to challenge me in the background and stuff and trying to figure out ways fo me to be the leader and all that kind of stuff. You know, like any kind of rebel. Skull and cross bone group of crazy maniacs. Space motorcycle gang or something. (Laughing)  Who knows, right?

There’s loyalty going on, but there’s also a lot of rivalry. Almost in everything and that’s kind of what the dynamics of what is going on. There’s this rivalry and for me it goes on all the time because of Yondu is the leader of this whole ravaging group.

Have you been doing a lot of stunts?

There’s some wire stuff going on, but that’s pretty safe. We got these harnesses and the cables, they hold thousands of pounds, so I’m not that heavy. If you get tangled up in it, that not be fun. But we’re not doing any real stunt. I don’t consider it stunts, you know. It’s just part of some of the action that we’re going to be doing that requires the wires.

What attracts you to playing this role?

The pay day. Kind of nice. My payday’s not the biggest payday, but it’s a good pay day and it’s nice for my mortgage and people like me more when I have money. But truthful.

Can we talk about your whistle?

Oh, you talk about whatever you want. I’ll give you any answer. What do you want?  (Whistles)

Is that your actual whistle?

Well, it’s harder to do with the teeth in so I can still do it, but it, but it’s a lot more difficult, so I’m probably going to be doing some ADR in my future for this whistle. It sounds pretty good, but they enhanced the other whistle, too, so I’m assuming they’ll enhance this whistle. My whistle that I’m using now. For Yondu as well. But we’ll whistle some this afternoon, I think. So I’ll be whistling. Yeah, if you’re around, you can hear the whistle.

Again, he becomes super curious about who we are.

And y’all, y’all are like bloggers or are you like Mama bloggers? And you’re all mamas. And how many children?  Y’all got a lot of children? Three, two, three. You have five kids? Yeah. Wow. That’s crazy. Wow. And you blog about your kids and life? And blue people? Oh yeah, the blue people of Kentucky. No one ever, you’ve blogged about them then?

We were all just as intrigued by this conversation.

Yeah, yeah. Some people laugh at me, but it’s true. There’s a whole group of uh, individuals that are blue. They have blue skin. It’s some sort of disease that has to do with your, the oxygen levels in your, in your body. I would never ever lie to you. But they do not have red eyes.

Who is your favorite GOTG character besides your own?

Rocket’s got the attitude. He reminds me of James Gunn a lot. (Laughs)

In case you missed it! Check out my other Guardian of the Galaxy Set visit posts.