On your mark! Get set! Go! Mickey and the Roadster Racers are about to rev up and air on Disney Channel and Disney Junior in a simulcast this Sunday, January 15th. Starring Mickey Mouse, and his pals Minnie, Pluto, Goofy, Daisy and Donald, along with their unique transforming vehicles, embark on humorous high-spirited races around the globe.

Mickey and the Roadster Racers

This isn’t just about the “boys” for Minnie and Daisy also run their own successful business as Happy Helpers, solving problems for anyone in need of a helping hand. Geared towards kids 2-7, the stories are designed to impart social and emotional lessons about friendship, teamwork, optimism and good sportsmanship.

On Creating Mickey and the Roadster Racers

Rob – We gave Mickey a classic hotrod. It’s his normal car from Clubhouse, and then it turns into this classic American Roadster.

Mark – Goofy’s personality, being so goofy, if his car could transform, what would it transform into? A bathtub! And Minnie being elegant and into fashion, we went with kind of a bow car, but basically the design comes from a French car called a Delahaye that had very smooth curves, and looked kinda like a bow. 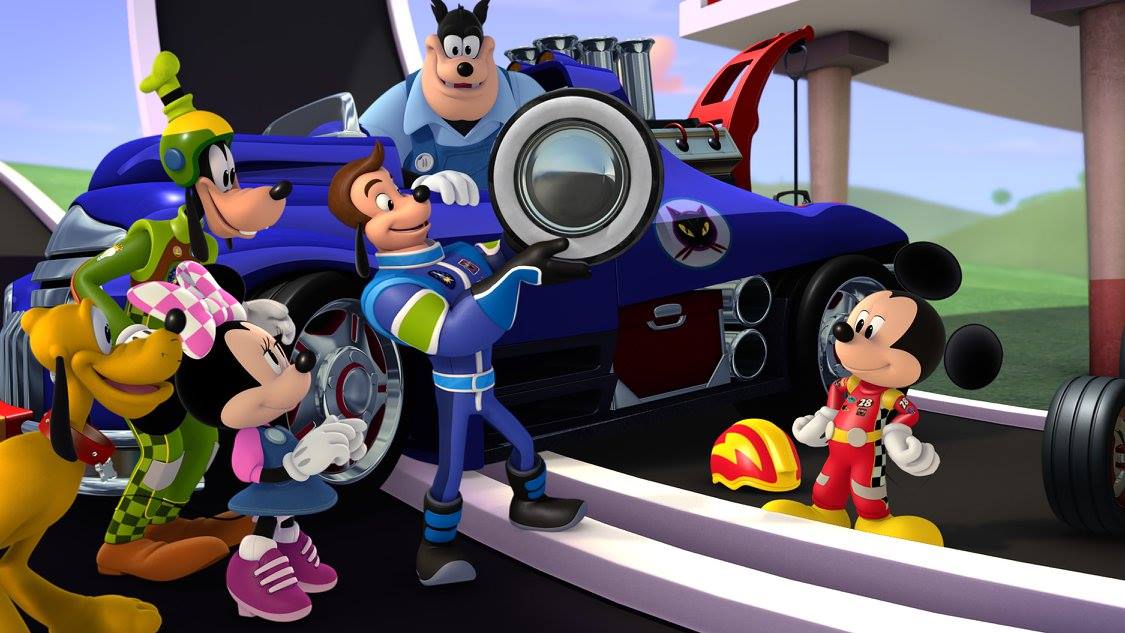 How to do what they do?

Rob – I was just one of those kids my parents didn’t know what to do with, ’cause I was always doodling and drawing.  We owned a restaurant, so my father would bring home butcher paper, put it in on the wall, and I would just go crazy, you know, drawing constantly.  And it developed into this!  So let your kids doodle, that’s all I want to say.”

Mark – I always was drawing when I was a little kid, and, of course, Mickey was one of the first characters that I drew, ’cause he’s all circles, and he was really easy to draw. And later on, when it was college time, I was really interested in being a cartoonist. I went to art school, and I went to film school, and I was bit by the animation bug. And it was really great. Years later, then Rob and I are working at Disney, which was the place that I always wanted to work at.

Walt Disney as a mentor.

Mark – This was a character that he held so close to his heart, you know. This was his beginnings.  So it’s a real honor to expand Mickey into the future. Walt was a total innovator. Whenever there was a chance to use a new technology, Walt was always the first to experiment with sound and color, and, you know, all kinds of things. I like to think of this as an extension. If Walt was alive today, he would have been the first one to use computer animation. There was a lot of studio people who didn’t want to experiment with computer animation way back when.  But I know Walt would’ve charged right into it. He brought us, you know, animatronics, and, you know, all the parks.  He was such a thinker that…I love that we can expand on his vision.

There will be some familiar voices joining the fun!

Beginning Sunday, December 25, on the Disney Junior App, kids can unlock daily content, such as short videos and mini-games, via a Hot Dog Hills interactive map counting down to the series premiere. A suite of games featuring a unique experience with each one of the Fabulous Five will be available on the app on Sunday, January 15.

Connect with Mickey and the Roadster Racers

* I was invited by Disney to an event covering the release of Mickey and the Roadster Racers. All opinions are my own.