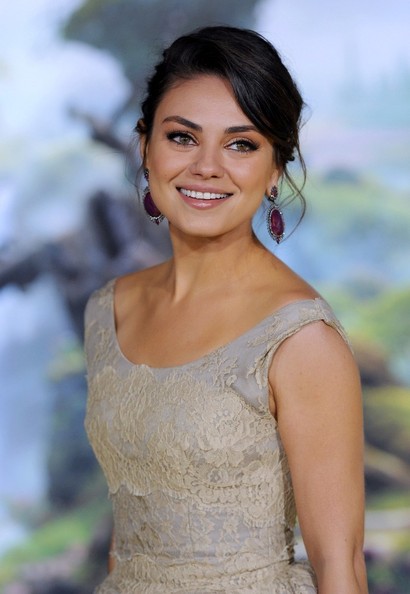 Mila Kunis is beautiful.  After seeing her play Theodora on screen at the OZ THE GREAT AND POWERFUL premiere, I caught a few glimpses of Mila at the afterparty.  First, I spotted her on the lap of her boyfriend, former “That 70’s Show” co-star Aston Kutcher.  She was wearing the gorgeous dress she wore on the yellow brick carpet but had on an over-sized jacket keeping her warm (it was in the 40’s).  There was a reporter wanting to talk with her.  Security was all over him.  She got up, said something to the security guy and then the reporter took out his voice recorder and she was smiling and answering his questions.  I hadn’t met her yet, but I really like her.

Fast forward 2 days and in she walks with her entourage.  Looking flawless she says,“Mommy Bloggers?  This is a whole new room for me!  When did this start happening?  I mean it’s new, right? ”

Maybe it’s because this is your first “Family” movie?

She’s funny, a real, “take me or leave me” kind of a girl.  She has no qualms about letting us know this part (doing the interview circuit) isn’t always fun, yet is obviously comfortable immediately with our group and we dig right into her and her role in OZ THE GREAT AND POWERFUL.

When were you introduced to the Wizard of Oz?

I came to America when I was seven and a half in 91.  I think I was nine years old, and the first full length book that I read in English was Return to Oz.  And I’ve spoken about this completely independent of this movie prior to ever being attached to this film that as a kid the first movie that I remember seeing that resonated with me was the Wizard of Oz.  I think just visually the color, the spectrum of it and how fantastical it was and how much you wanted to live in that world, for a nine year old was so magical and so grand so I have the greatest, fondest memories of it.

How are you experiencing the family genre?

Well I’m in a room full of mommies so let’s be clear, this is new.

Do you feel a different response?

No, truthfully…like the mouse is gonna get so mad, you guys, you don’t even know.   The truth is oddly enough, here’s what I realized, I thought the questions would be a little bit more demure like from not you guys but from others and they’re not. They’re just as obnoxious and awful as when you do an R-rated film so I learned – nothing changes.  You can do a movie for Disney or not.  People will still ask you inappropriate questions.  So, in order to answer it, do I feel like there’s a difference in promoting it?  Apparently not.  They still put you in a room with these people that apparently have no difference whether you’re making a family driven show or otherwise.  But I do realize it’s very sad to me.  This is the first film that I’ve done that’s not R rated. It’s a really weird connection.

Did you like the technical aspects of the film?

You know what? It actually wasn’t so hard. I mean I think people prepared me for like a lot of green screen.  I didn’t have a lot of green screen.  They built most sets.  When this castle was tangible, Emerald City was tangible, the forest, the woods was tangible, the cemetery, everything was there. So it’s not like I had to imagine things, uh, and as far as wire work goes, I had fun with it.  The next project that I’m doing is a lot more wire work so I’ll let you know after that one but in this one it was really fun, yeah. 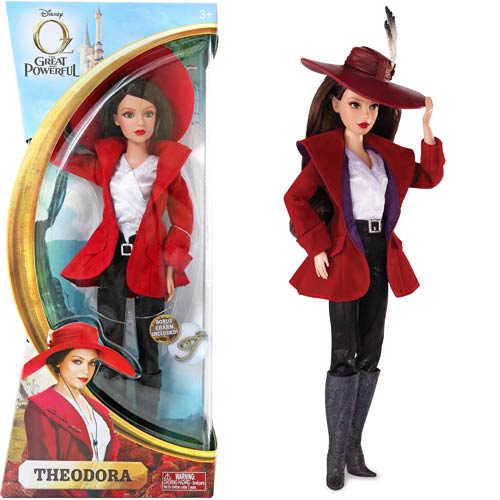 Do you have the doll?

She is so excited!

Do you play with it?

I just got it two days ago. It’s still in his box. I won’t lie.  I’ve shown it to everybody that walks into the house because let me be clear. It’s not just a doll, it’s a Disney doll.  Like that’s a whole of me!  I’m like hey you guys, have you seen this? Check this out?  See this.  Everybody that walks into the house.  Like I don’t even care.  I’m like bring the doll because it’s a Disney doll. It’s insane. It’s insane. Oh, yeah.  But no it’s still in its box.  I think you can buy it at Target.  Not to say that I know these things but I think you may, yes.

She’s playful and almost childlike in her excitement over the doll.  And yes, it is at Target!
Tell me about the cast.

James and I, I think counted — it’s our eighth movie together, eighth project together so he doesn’t count.  We’re stuck with one another.  Rachel and I had a fantastic time. We had so much fun and Michelle and I literally get to do one thing together and I are dying to work more so we all had a great time and Detroit was really fun, FYI, in case anybody wants to go to Detroit.  I love it. I did.

For what age do you think the film is appropriate for a child?

Oh, I don’t know. I think that what kids watch now a days is different than what kids watched when I was young so I don’t know.  I think that it’s up to the parents to decide.  That’s the truth.  I’m not a parent. I have no idea.  I think some parents would let a ten year old watch it and some parents wouldn’t.  I have no say in it.  Ask a mom. I don’t think about these things. 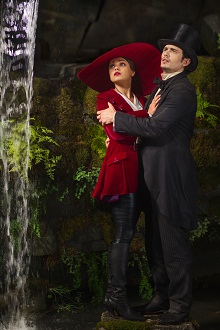 ***WARNING – SPOILERS THROUGHOUT REST OF INTERVIEW***

Truth is I do find that it’s the same character, I really do.  I think it’s just a woman scorned and it’s a character that goes through a transformation, an emotional transformation of a heartache and just so happens to transform in color but I think that the deep rooted aspect of it is just, you know, a broken heart so I think it’s the same thing.  It was fun to play both, for sure.

How was the makeup?

I think the beginning process was four hours and by the end a little under two. Putting the makeup on, not a problem.  Taking the makeup off, every night it makes your face swell. Like it legitimately puffs it up.  If you imagine whipping your skin every day, that’s what it does and it’s a full prosthetic piece.  I had two pieces and it’s the bottom part and then the nose and the eyebrows.  And it doesn’t matter how gently Howard did it and Howard — the special effects guy who did a beautiful job — you rip the skin. You’re constantly pulling at your skin every single night.

It’s awful. It’s awful. It’s not even pleasant and the smell of something called Snappy G which is the gluing adhesive.  They glue it with like a cement type glue to your face. I think that if I had to smell it today it would probably make me cry.  Like that would be my natural reaction. I’d be like oh, god.  It’s not pleasant.

You’re known for your comedies –

Am I really known for my comedies?  I’ve done two, two.  Let’s be clear.

How did you feel getting into this evil character?

Nothing different.  I mean, you know, she’s a young, naïve girl who gets her heart broken and then grows a nose.

We laugh, for she points at her nose and has this funny look on her face.

And then we are out of time!