When a movie like Moana comes along and you are an incredible musician that has lived the very Samoa culture the Disney movie shares, you suddenly become Moana Samoa Songwriter Opetaia Foa’i. His notoriety in the music world was because of the Polynesian influence to his sound. One that carries beautifully in the music he and Lin-Manuel Miranda wrote and produced together for the film.

Opetaia work includes eight Te Vaka albums that he wrote, recorded and co-produced. He has toured the world with Te Vaka sharing the message of the Pacific Islands’ people,  culture, music, and dance. Amongst his numerous awards and nominations, the Senior Pacific Artist award for his contribution to Pacific Music and has been instrumental in assisting the music and culture of the South Pacific to reach a much wider international audience. After touring internationally for 20 years it is clear after speaking with Opetaia that it’s only the beginning. Moana is a game changer.

First, have a listen. Opetaia and Lin-Manuel sing We Know The Way in Tuvaluan and English. I love this!

How much time did you spend working and collaborating with Lin-Manuel to create some of the songs together? What was that process like for you?

It was awesome because we had a lot of time, so when we got together, and Lin-Manuel works very fast and I work very fast, too. It was quite an amazing combination because you’ve got Mark [Mancina] who, of course, is very experienced along that line. You’ve got Lin who’s very good with lyrics and his rapping.  And there’s me. I don’t read music but I do write from emotion. I can grab a scene and I can get emotion out of it very quickly and I get bored with things very quickly, so we found that that combination worked really well.  I’m very childish in the studio and luckily so are Lin and Mark, so we had a lot of fun together.

Before he got wicked famous, it was awesome because we had a lot of time together, He works very fast and I work very fast too.  It was quite an amazing combination cause you’ve got Mark who is very experienced along that line and you’ve got Lin who’s very good with lyrics and directing.  And there’s me who, I don’t read music but I do write from emotion. I can grab a scene and I can get emotion out of it very quickly so we found that that combination worked really well.  I’m very childish in the Studio and luckily so was Lin and so we had a lot of fun together.

The traditional sound and lyrics are a perfect combo giving the music a modern feel.

I sort of trusted that Mark and the team, I trusted that they would make those decisions.  And I didn’t compromise from my cultural background either. I’ve got many things that didn’t get on to the Movie and yeah, a lot of things, they would gently say, “Opetaia, that was good, but we don’t want to scare the children.”  So after awhile I got the message because I’m very, very passionate about the chants of the olden pre-missionary Pacific, you know, who didn’t have melodies but just chants and beats and I love that.

What has it been like for you coming from a small Samoan village to being part of Moana?

I was born in Western Samoa in a thatched hut. Just the thatched hut with no walls, so to find myself here is an incredible journey. My jaws been open for quite some time. I call it an aesthetic Heaven, that people can be around the table and they can talk about anything they like and there’s no one running anybody down, it’s incredible. So all that’s new to me. In my culture, music is like breathing air. They can never understand why I was always trying to write songs or do something musically, so it was a hard journey for me to go get a real job. I think I can understand what Moana was going through.

Let’s talk about the first track written, We Know the Way. How did that song come about? 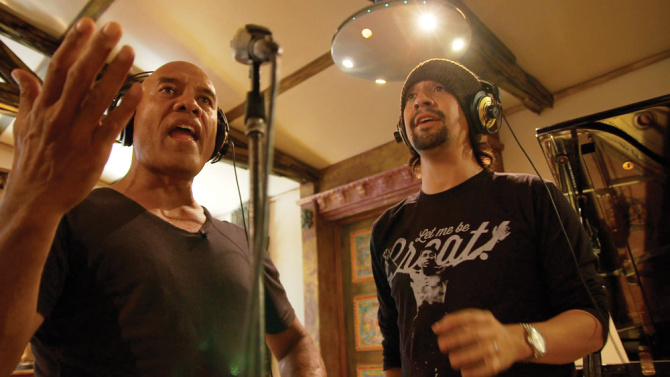 The first track that I wrote was “We Know the Way”, and I wrote that as soon in 2015, on the flight back home when John Musker and Ron Clements and Osnat Shurer were explaining what they wanted, and of course, voyaging is my thing. I was so excited that I wrote that. And then we got together in Carmel with Lin and Mark. And Lin was sort…pacing up and down outside and getting all the lyrics together. Smoke coming out of his ears. And he come out with those beautiful lyrics and and just slaughtered it. And then we knew something was special about this.

What are your thoughts now that Moana is out for the world to see?

The animation, the story, everything was just incredible. Well, I could say this endearingly; my ancestors would be proud of this Movie.

This is an exciting time for you and your culture, so what’s next?

I’m happy where I am now. Just to get here. I was trying to explain to you my journey, it was really to promote my culture. I’ve traveled the world and people got sick of me talking about these people, that are the best navigators, best sailors in the world, everywhere. And to be honest, I thought I’d reached the end of my run, and I was ready to, you could say, hang up my oars. And this opportunity came up. So it’s just extended it a little bit more.

Check out Moana in theaters now, and download the music today!

*I was invited by Disney to attend the Moana Event to share my experiences with my readers. All opinions are my own.