I know, you can actually hear Pee-wee Herman’s laugh in your head.  You can’t help it.  And call me weird, but I love that Pee-wee’s Playhouse: The Complete Series [Blu-ray]

is now available on Blu-ray.  I was a Pee-wee watcher many, many years ago, and looking back, he was pretty freaking cool.  I mean, the vision and the creative freedom to experiment with new styles and techniques: combining live-action, puppetry, stop-motion and clay animation.  The series is brimming with rich original characters, humor, innovative visual effects and production designs.  There was always a life lesson to be learned.  Maybe Pee-wee was a little ahead of his time.  Maybe that is one of the reasons I still love him today. 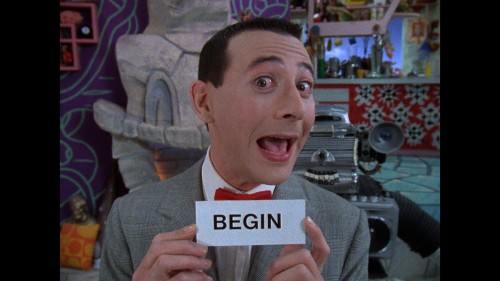 The new set has OVER 4 HOURS of brand-new interviews with the cast and crew, plus never-seen, behind-the-scenes footage!  So the secret word of the day is Blu-ray!  That’s right, whenever you hear that word you know what to do!  😉

See all the features this set has to offer and why not get yours today?

Experience Pee-wee’s Playhouse like never before!  All 45 wacky episodes, plus the Pee-wee’s Playhouse Christmas Special, have been meticulously remastered from the original film elements — and now you can see this ground-breaking series for the first time in beautiful high-definition! 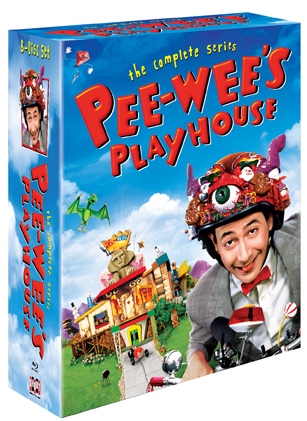 TV Guide named Pee-wee’s Playhouse #10 on their list of THE TOP 25 CULT TELEVISION SHOWS EVER!  For over 25 years, the enormously popular Pee-wee Herman and innovative television series Pee-wee’s Playhouse, created by, and starring Paul Reubens, has captured a special place in the hearts of millions of viewers, young and old.  Since its initial premiere on CBS in 1986, this highly acclaimed children’s program became Saturday morning appointment viewing for kids in the ‘80s and ‘90s and has been a staple in the pop culture zeitgeist ever since.

Pee-wee’s Playhouse: The Complete Series Blu-ray box set contains OVER 4 HOURS of brand-new interviews with the cast and crew, plus never-seen, behind-the-scenes footage—all part of TEN FEATURETTES, including:

These featurettes include interviews with actors Laurence Fishburne (Cowboy Curtis), S. Epatha Merkerson (Reba the mail lady), Lynne Marie Stewart (Miss Yvonne) and John Paragon (Jambi the genie). Mark Mothersbaugh and Danny Elfman explain the music of the show and the Emmy® award-winning production design team of Gary Panter, Wayne White and Ric Heitzman explain how the sets and puppets were imagined and produced. Animation Supervisor of all 5 seasons of Pee-wee’s Playhouse, Prudence Fenton (Liquid Television) talks about all the types of animation used in the program and animators Peter Lord and David Sproxton (Wallace & Gromit) discuss their contributions.  Ve Neill, the multi-Oscar® winning make-up artist talks about designing the make-up ‘looks’.  Two of the shows writers talk about how the scripts were created.  Other cast and crew explain, in fascinating detail, stories from the production of Pee-wee’s Playhouse.  If that weren’t enough, many of the shows puppeteers and voice artists are interviewed about how the puppet characters were brought to life.

Ha!  Yes that is Laurence Fishburne as Cowboy Curtis!  As mentioned above, he isn’t the only actor that shared the small screen with Pee-wee.

*Shout Factory sent me the Pee-wee’s Playhouse set to for review purposes.  All opinions expressed are my own.