As fans, it’s easy to think when watching a movie, “I could totally be friends with her and/or him.” I know I said that after watching almost every Rachel McAdams movie. She is quite the mean girl, and then again she’s the girl next door. She has been paired with some of the hottest men in Hollywood, but this is a first for her. Rachel lands her first Marvel role as Christine Palmer, a surgeon and former colleague of Doctor Stephen Strange, who helps him anchor his humanity.

I started with the obvious; she looks amazing. So I compliment Rachel McAdams immediately on her awesome off the shoulder black and gold cropped jacket. Very Sandy at the end of Grease. Hot!

That top is awesome.

Thank you. I thought maybe it was too much but why not?

It’s Marvel! How is this experience of joining the Marvel universe?

It is everything I had hoped for and more really. I assumed I would be working with the crème de la crème really and I was. So it was great to be in such great hands. And you know just from costumes to everything, just so well done, so beautifully thought through and well-crafted. They didn’t even make me pretend that much with green screen. I mean that’s how considerate they were. They had real things on fishing wires to actually try and scare me. They are very thoughtful people.

Have you seen the film? (Many of the cast we interviewed hadn’t yet.)

I have, I’ve seen an early cut of the film. I think the effects were about halfway done, but they were still mind blowing.

I saw it last night, incredible. You are one of the few that have seen it out of your castmates.

Oh, am I? Woo, lucky me. I don’t know what I did to deserve that, but that’s nice. Yeah, it was you know so, so great, so trippy. I love how trippy it is.

Were you a Marvel fan before doing the role?

Did playing a doctor have you doing some medical research?

Yes, I’m a little funny when it comes to blood and guts and stuff like that. But my mom’s a nurse, so I’d grown up around medicine which is probably why I became an actress instead. But I did get to shadow some amazing brain surgeons, a female brain surgeon in Toronto, another surgeon in London. And then we had a surgeon on set every day. So and he taught me to do sutures and was practicing on turkey breasts, raw turkey breasts. That was interesting. Oranges, that was a little easier to take in my purse so I could practice wherever I went.

I read this really great book called Do No Harm by Henry Marsh who is a world-famous brain surgeon. It was just a phenomenal book and really like eye-opening when it comes to you know being your own advocate when it comes to your health. And I thought it was so funny; he said, “The number of people who don’t ask me how many times I’ve actually done the surgery I’m about to do on them is extraordinary.”

So it gave me some good insight into things, questions to ask if I was ever in that position. I got to learn a lot. And one of the doctors offered to take me up in the Evac helicopter for the weekend. So cool, right? But I’m terrified of flying. And I’d have a weak stomach. So I think for the sake of everyone I should decline this really generous offer. So I didn’t, unfortunately, get over my fear and do that. But I’m just worried I was going to you know be fainting in the corner of the helicopter and just you know causing problems. But it was very educational. And I became kind of obsessed with the suturing. It was like, almost like knitting. I just took it everywhere with me and like would put it on a doorknob, and I think I looked little crazy but it was fun.

Onset, what was it like to be in scrubs with everyone else all in superhero stuff?

I loved it. So comfortable, I got to wear like orthopedic running shoes every day. And you know, like high heels or not, you know the older you get the harder it is to wear them. So I was grateful for that. And I was a little jealous of the levitation cloak, but I was happy to be comfortable.

Did you ever put on the cloak?

No, you couldn’t touch that thing. Sacred cloak! No, I just got to look at it.

Your character is so intensely emotional in the film. Is there a special memory or place, how do you draw on that emotion for the character?

I think having a mother as a nurse helps. She’s so compassionate and unfortunately, would take her work home with her sometimes. So, and I think Christine’s (Palmer) more that kind of character. So I think I grew up with that a little bit and have great admiration for people who do that for a living and who have real empathy. So I suppose I drew from my mom a bit.

She did IV therapy. If she would miss someone’s vein I mean, she just like beat herself up so bad. I guess it was a little bit personal that way. But also you know Benedict is such an extraordinary actor that you just have to be present with him and it all kind of falls into place. I mean, we did a lot of crying together. We cried one day for eight hours straight, every single take.

And I’ve never been able to do that before. I mean, you know it comes, it goes, it comes back again. But with Benedict, I mean he’s so emotionally available and present that I’d look at him, and I’d start crying. He’d look at me; it was just like water works all day long. We both had these incredible headaches at the end of the day. And I was like, well we’re dehydrated, you know? I really have to give kudos to him for that.

How was it for you to get the role of Christine Palmer?

Oh, I was just over the moon. I met with (Director) Scott (Derrickson), and he was just so incredibly passionate, and you know a self-proclaimed comic geek. And I think that’s who you want at the helm of something like this. It was so personal for him. I just knew he was the right guy for it and that I’d be great hands. Marvel would be so supportive as well. I was just excited at the possibilities.

What superpower do you wish you could possess?

I would like to be invisible because I’d love to go into people’s houses and see their interior decorating. Don’t you guys? Like when you’re driving at night and you can kind of see through the window, and you think, oh that looks so cozy in there. I wish I could get a free pass. Yeah, so that’s probably the one I’d pick. I’d be a total creeper.

How does it feel for you to come into this knowing that you have a huge fan base that isn’t necessarily all Marvel fans? You’re going to be bringing a new audience to the Marvel universe.

It’s really exciting. I hope the Mean Girls girls like, like it. I hope everyone loves it. I think Benedict is just like; there couldn’t be a more perfect Dr. Strange in the universe that they could have chosen. So, I think everyone will love what he’s done and take the ride.

It is good to know that you’re not at all a mean girl.

TO BE CONTINUED TO SAVE YOU FROM SOME SPOILERS

Be on the lookout for a future post where I will be sharing spoiler quote after the movie release on 11/04/16. 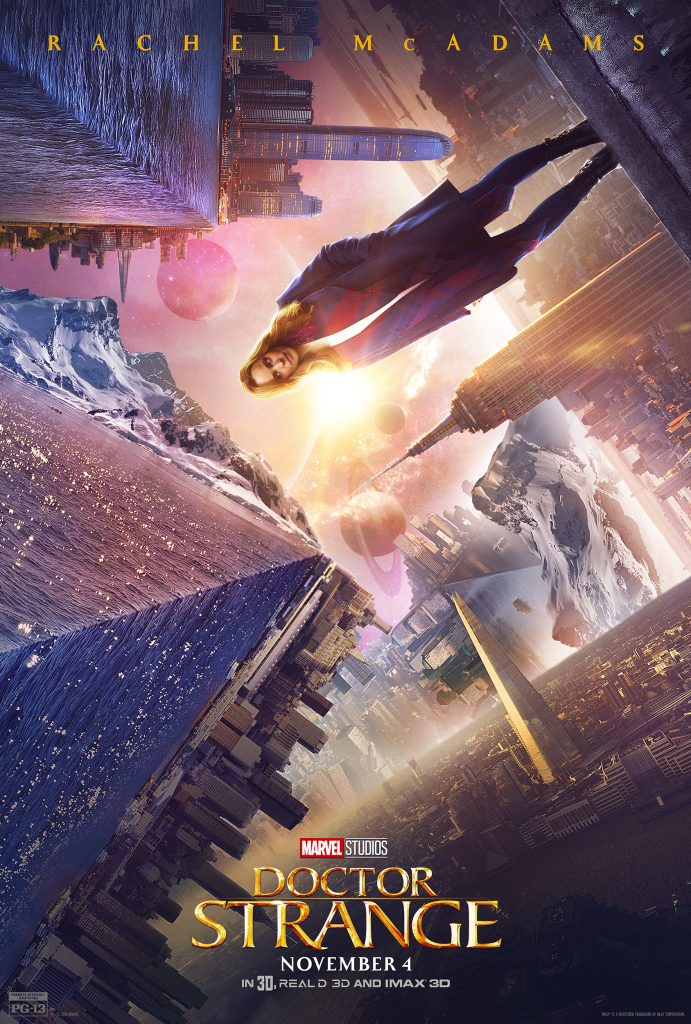