Disney’s new Cinderella film made quite an impact in the box office this weekend.  It was really nice to see all the love it got via social media, and even after posting my review, I received a bunch of messages privately sharing that this is one movie that everyone, men, women and children are loving. 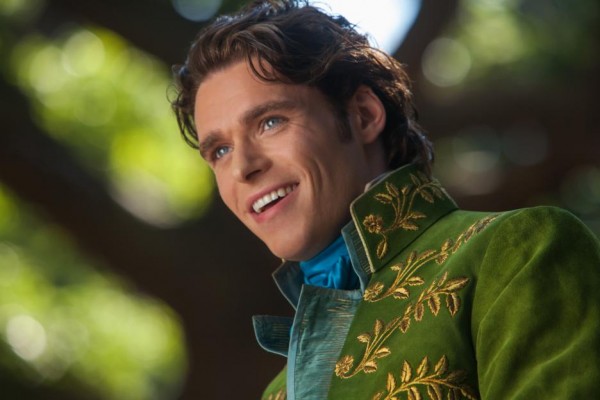 Richard Madden could possibly have set a new standard of Disney prince’s.  I mean of course he is quite handsome, but after chatting with him about his role in the new Cinderella movie directed by Kenneth Branagh and starring Lily James as Cinderella and Cate Blanchette as that mean ole step mom, he really wanted to bring more to his character.

Richard shares in this exclusive interview what it’s like to be Prince Charming, wearing leggings, riding horses, learning to dance and more.

Richard Madden is a Prince: The Cinderella Interview

So what’s it like taking on the coveted role of Cinderella’s prince?

I wanted to make him different. In the animation, you only see him in two or three scenes. Also, in original animation there’s this kind of old fashioned view, I think, of a woman needing a man to come and rescue her from a terrible life, and that’s kind of outdated enough. Not a message I think we should be telling young girls. In this version it’s not that, which is great. You’ve got a young man with all of his own problems, and a young woman with hers, and actually they bring the best out of each other. I think she rescues him as much as he rescues her and that’s why I was really interested in this version.

We got to kind of see this real young man character and most importantly, Cinderella’s this wonderful amazing woman that I wanted to make a man that was worthy of her affections.

Is there a scene that you can call your favorite?

The first scene that I show up with Lil, which is us on horseback when we first meet in the woods. I like being outside and being on a horse. It’s more fun than being in the studio most of the time. That was our first day on set, the first day of shooting. 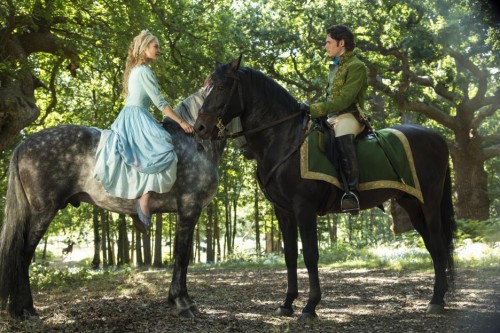 So you kind of have all of that going on, on top of us kind of trying to play that scene. And I love what Ken wanted to do, these two huge beasts. They were both trying to control the horses and their feelings and this kind of dance that they do on the horses.

The ballroom scene was magnificent.  What was it like to train for the dance for that scene?

It was miserable. I’m not a naturally gifted dancer. I had to kind of train for 2 or 3 months, 3 or 4 times a week to get myself up to scratch. There was 2 months before they let me near Lily’s dress, because I would just destroy it. I went through like two practice dresses that looked like a bunch of cats have destroyed them. I think the Prince would enjoy dancing. So I wanted to make it look as if he was enjoying it, and also that I could just act with Lily and not be thinking about what I’m doing with my feet.

There are some heavy emotions surrounding the prince in this film.  Which was the one that got you?

The scene with Derek playing the King. That was a very emotional day, but a really good one. I love working with Derek. He was kind of an icon to me, and that was kind of a really moving scene. He plays it so beautifully and it was hard not to get caught up in that. 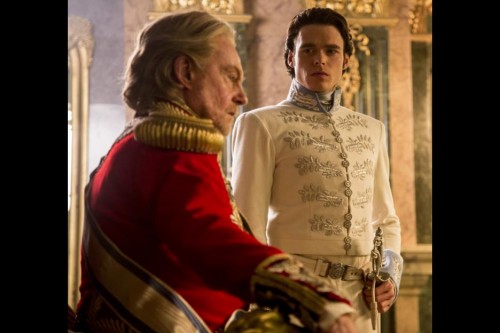 First and foremost Cinderella’s a daughter, and the Prince is a son, and they’re so influenced by their parents. I think that’s how we get to know them and get to know their personalities and what they’re like. They really wanted to get that relationship going. I really wanted to have a sense of humor to this Prince. And Derek plays the King so well, with that kind of sense of humor. I wanted the Prince to have that, and for them to kind of be influenced by each other.

Going from a strong King to a softer Prince, how did you have to prepare for this role differently than that of the one you play on The Game of Thrones? 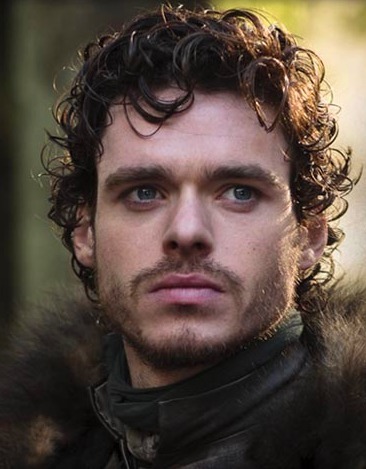 That’s what was so important about this, was that young man questioning what’s going on around him, and questioning his father and actually being influenced by this other woman that’s come in with different ideas and knowing in his heart that that’s right.

But there’s not a lot of parallels after that between them. They’re both kind of very different men, and I mean it’s nice to play a character where someone’s trying to kill you or your whole family all the time.

So with being the prince, what is your take away?

I played characters like Robb Stark and the Prince. They have such strong moral compasses. They’re really good people, and it’s refreshing, and it kind of reminds me how to be sometimes, because you know you’re playing these people and they have really good hearts. It’s like you know better now that you’ve played someone like that.

And especially with Lily—she had the weight of the movie on her shoulders, and she’s a young actress, and it’s a massive piece. And genuinely she couldn’t be better casting, because she does kill everything with kindness, and she’s genuine and loving and caring. And that’s something that you try and take away from the film every day. You kind of go, “You know let’s find the best in this situation and let’s be as nice as we can.

Cinderella has the iconic blue gown, you have leggings…

Yeah, there are lots of leggings. Well it was really good actually. I love Sandy Powell who designed these amazing costumes. And when I first met with her, I was really keen to make sure that the Prince retained a masculinity with these costumes, because a lot of times in these Disney films they would not be very masculine, and they’re really decadent and extravagant, but actually Sandy who we talked about it.

That’s what she wanted, too, and they are beautiful and detailed and gorgeous, but also they’re all rigid in practicality. All of them. Even the boots I’m wearing are great for riding. The tight pants have a stretch in them, which is great for being on a horse. That first jacket I wear sets in a way that’s perfect for being on a horse and how it comes down, so they’re rooted in a practicality.

When I first saw my ballroom outfit, I walk in and it’s white with silver and sequins and glitter. And I’m like, ‘Sandy we talked about the masculinity. We agreed on something, and that’s just not it.’ But actually once you put it on it does make me feel regal.

You put them into those sets and with all the other characters, and it doesn’t feel out of place. When you’re in a little studio room trying on these costumes you’re like, ‘How am I going to pull this off?’ Then you get on the set and suddenly it feels completely natural. It’s actually empowering.

What was it like to hear you were cast as Cinderella’s prince?

I was kind of overwhelmed, and really excited, and then just really terrified. After that like, “Oh God, everyone’s going to be like ‘He’s wrong casting’ and ‘How am I going to do it?’ and ‘That’s not my idea of a Prince.’

And so all the fear of that, but I just went back to the original animation. We don’t get to know his name. I can build a character from scratch, and I can do that with Branagh. There’s no one better to kind of take me through that than him. A lot of my Prince is based on Kenneth Branagh because he is like a true gentleman.

Well on that note, what was it like working with Kenneth? 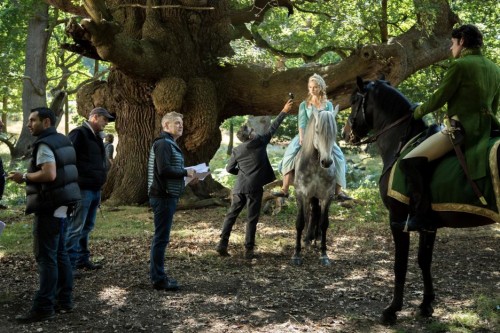 I loved it. Everyday you’re on set with Kenneth Branagh, and Cate Blanchett, and Stellan Skarsgârd, and Helena Bonham Carter. It’s like kind of a master class in acting and also just in how to conduct yourself as an actor and as well. But Ken’s just amazing because the same amount of detail was put in something like this as it would be into something like MacBeth. Ken really kind of inspires you. And that’s why you know it brings out the best in me, and that’s why we’re working together again in 2016 because we enjoyed working together.

How do you feel about being a role model for young men particularly with your role in this film?

Well the Prince is the role model, not me. But that was important. I grew up with these Disney films, and I have two sisters. So we watch these films and say that. And I think that’s just where you first deal with and encounter death, and love, and good, and bad. That’s what I really wanted to do with this Prince, was make someone, as I said at the start, that’s not that old fashioned view of a girl needing a guy. I wanted to try to make a Prince that young men would have to look up to, a Prince that has a built-in respect for women and a compassion to the people around him, an awareness of his privilege. And so if there’s little boys that grow up and are influenced by that then I’ll be really honored by it.