Once again, I am sitting in an interview with one of the people behind the magic of making a film, and this time, it’s with the extremely talented Bret McKenzie of the Muppets Most Wanted. 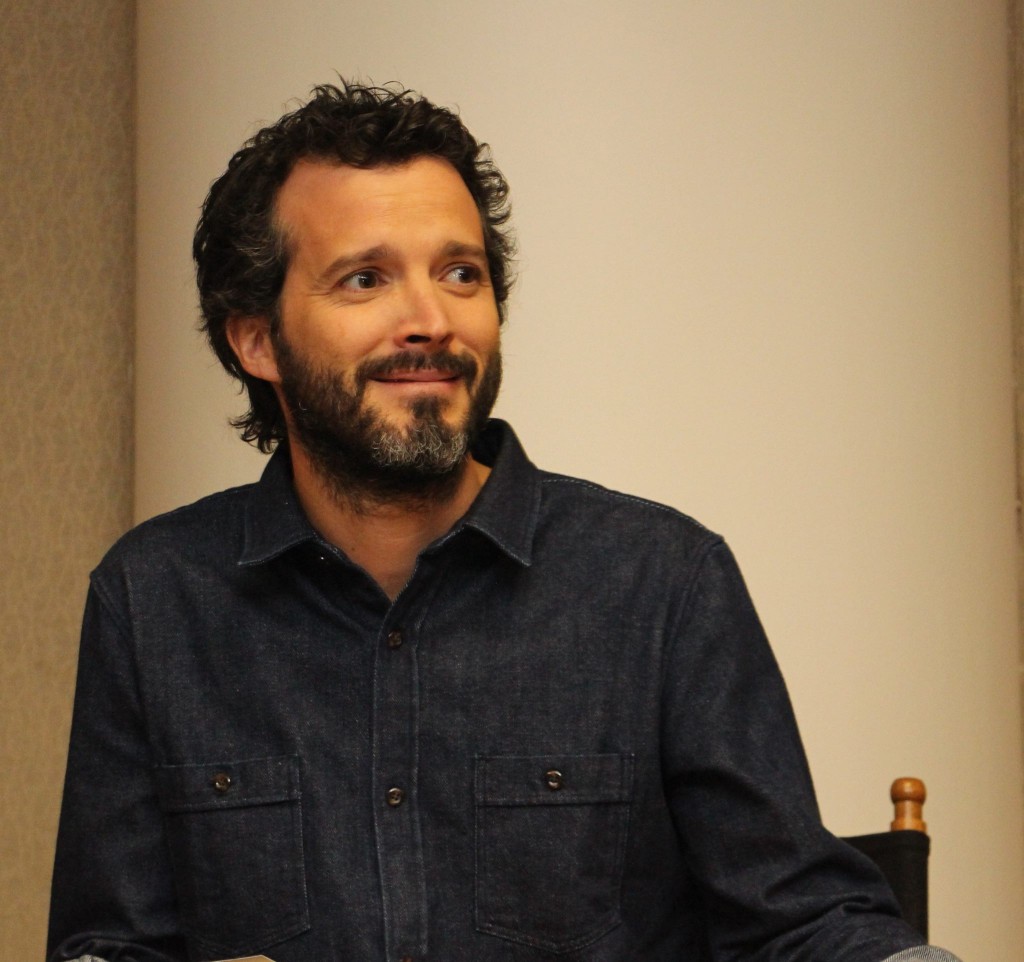 The music in my opinion truly makes the movie!  The lyrics are so funny, and if you are looking for a great new CD to pop in the car and keep the kids laughing and singing, this is one you should definitely check out.

As you can imagine, songwriting is a gift.  But imagine writing songs for iconic characters that we grew up loving, as well as ones that our own kids love today.  Interviewing Bret was a fun experience.  Here’s a great look at what it entails to work on the songs of a film following an Oscar win from the last.

Songwriter from The Muppets Most Wanted Bret McKenzie Interview

Q:  Your song Man or Muppet won an Oscar, while working on the music for this film did you have any pressure to try to meet that kind of standard again?

BM:  Yeah I was, obviously there was a lot of pressure because of the Oscar.  But really what could I do?  There’s always gonna be downhill, so I just had to (meet the standard), you know, I mean I was appreciative but then I had to get on with the job and just forget about that.  I didn’t work on the last muppet film to win awards, you know.

Q:  So how fun was writing the songs?

BM:  Oh it was really fun working on those, James and Nick Stoller sent me the script and they’re lots of fun, great ideas for songs and then I got to add new ideas.  The first song “We’re doing a Sequel,” they had the original idea then I just started looking through the history of bad sequels and qualities of sequels and there’s so many.  And there was one lyric, (in) the first song, the first lyric in the song, (Singing) “We’re doing a sequel, that’s what we do in Hollywood, but everybody knows that the sequel’s never quite as good,” that felt like a great start to the movie ’cause it lets the audience know that  first of all it’s a sequel and then  we know that it’s possibly not as good as the last one.  And it’s, you know, like that’s the way they wanted it ’cause he wants kinda the audience can’t but help go, “Oh is this gonna be better than the last one? Let’s see what they do.”  So we kinda let them in on that.  And that’s what I love about the Muppets is they can do that.  The Muppets can turn to the audience and look straight at camera and talk to them about how they’re making a movie.  There was one lyric in that I just went through and looked at bad sequels and the qualities in them.  Like there was one lyric that Ralph the Dog was gonna sing that is in the soundtrack but not in the movie where he goes, (Singing) “We’re doing a sequel, how hard can it be?  We can’t do any worse than the Godfather III.”  So yeah, it was a bit of a zinger so we took that one out.  But then I like how Piggy can talk about how “there’s no need to disguise,” um, “the studio considers us a viable franchise,” there’s some fun, it was really a fun song to write, yeah.  It was good.

Q:  Do you get any inspiration from Flight of the Conchords for your songs on the Muppets?

BM:  Those guys are a big influence on me.  I mean, in some ways it’s the same sort of thing as writing comedy songs.  I guess that’s where I learned how to write comedy songs.  So I’m using the same techniques, yeah.

Q:  I admire your creative process, how do you put your songs together?

BM:  Well they send me a script with the idea of a song but it’s usually quite a loose idea.  And then for example the ballad, it was originally called “Love Ain’t Easy,” and it was a Piggy ballad. And first of all I was nervous because Piggy is a great comedic character, but not a great singer, and I was worried about her carrying an emotional ballad because there’s only so much of her voice that the audience, I think, wants to hear, you know.  Thirty seconds is great, then a couple of minutes you’re really start being a bit painful.  So I suggested we try and get a singer to help her and we were really excited when Celine Dion agreed.  I’m actually hoping to get like a Las Vegas Celine Dion/Piggy Diva Night.  That’s my dream. Yeah. Anyway so then I would write the song and then adapt it for the characters and I’d go to James Bobin and play it to him.  One of the stranger experiences on the job is, I go to the Disney offices to play the songs to them.  And I sit at the piano, and having done two Muppet films now I can do an okay impression of a lot of the different characters so I would say, “This is Miss Piggy’s ballad,” and I’d sit down in this room with all these Hollywood suits, and I would go, so Miss Piggy, she turns to the camera and she starts doing like this, (as he impersonates Miss Piggy in a high pitched voice singing) “How can something so right, be so…” literally a crazy job that, I mean, it’s kinda fun yeah so, I can do all those Muppet voices.  Then sometimes you get someone like Tina Fey who got the role of prison guard and I always wanted to do this doo wop song in there and then I started working with her and I adjusted the song to suit her voice because it was the wrong pitch and we kinda worked together on find out what her strengths are, where her voice sits.  And that’s one of the benefits of being the songwriter and producer of the songs as well is, if it’s not working I can just change the song.

Q:  Whose idea was it for the last end number?

Here’s the original one and to see the new one you need to go check out the Muppets Most Wanted in theaters now!

MUPPETS MOST WANTED (In Theaters Now)