With the highly anticipated release of the latest Star Wars movie, getting an exclusive invite to the screening a few days early means I am able to share my Star Wars: The Force Awakens review with NO SPOILERS. See what to expect without giving away any surprises.

I have shared my interviews with Harrison Ford, Daisy Ridley and John Boyega this week, and now having had the opportunity to watch Star Wars: The Force Awakens, I wish I could interview them all over again. I have so many questions. I have been pretty much mind blown for hours since walking out of the theater.

Star Wars: The Force Awakens Review with NO SPOILERS

This is an overall review with NO SPOILERS. Just a quick take away to feed into your already simmering excitement with the release of Star Wars: The Force Awakens. 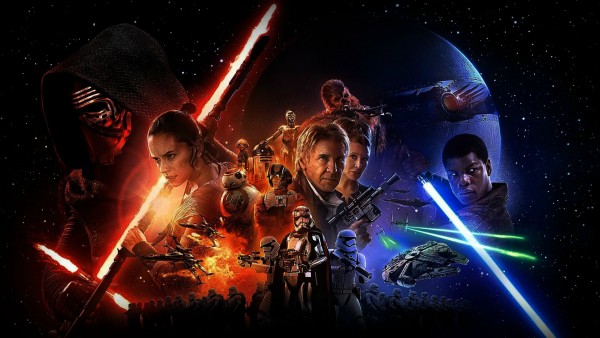 My first impression when the intro music started and the story scrolls the screen, I had that feeling of familiarity, that old school Star Wars. The thing I loved is that nostalgia stayed throughout the film, but then with the introduction to the new faces of Daisy Ridley (Rey), John Boyega (Finn) and Oscar Isaac (Poe), yet the Han Solo humor that only Harrison Ford can bring to the screen, it was perfection. The perfect marriage of old and new.

Let me tell you about these two in particular, starting with the lady first. Daisy Ridley’s performance as Rey makes me stand up and cheer! Strong, smart, and beautiful. Being coined “The Next Luke Skywalker” is just scratching the surface. This girl is SO good. From her first moment on the screen til the end, you want Rey to be on your side! But as fantastic as Ridley is in this role, her character feeds off Finn, Boyega’s character, who will make you laugh. He’s as funny on screen as he is in real life, but Finn’s storyline also makes you think. These two will bring the fans back for then next film. For relatively unknown actors, these two have proven they deserve to play Rey and Finn.

Now these two. I will say that for me, when Harrison Ford shows up, the chemistry of all the characters made the movie work. Again, without giving anything away, I will say, Ford gives you the same Han Solo/Chewy relationship. It’s easy to see why he said, “You know, you turn around and see that guy in the Chewbacca suit. You know what the drill is. I have walked more than a mile in those shoes and it was a familiar path.” Watching him, you know that the time that went by is relevant in Episode VII, and as Ford shared, You know, if we were trying to do exactly the same thing, if we were trying to pretend, if I died my hair and pretended that 30 years had not gone by, I would be much less comfortable. But this acknowledges the reality of the passage of time. It deals with the question of what happened while I was off stage for 30 years. And it deals with it in a really smart way.

I have to mention the brilliant mind of director, writer and producer J.J. Abrams. Taking on Star Wars is no small task. One that he took on in a way that I think the biggest of fans will be more than happy. Sitting here writing this, my head still spinning, I’m wishing I could actually talk about the movie. Tell you what I think, hear what you think. I plan on going to see Star Wars: The Force Awakens for a second time this weekend. I want to see it again. Take in some of the things I missed, and really, just take the whole story in again. Let how it ends sink in, and spend the next year and a half or so wondering what director Rian Johnson, currently working on Episode VIII, where will he take the story?

One of my favorite quotes from my friend Marshall Weinbaum sums it up perfectly, “Imagine how you would feel seeing someone you loved after 32 years when you thought you would never see them again. That is THE FORCE AWAKENS. It is everything you want it to be and more!”

Star Wars: The Force Awakens is rated PG-13. I don’t feel there is anything more graphic or scary so to speak than in any of the others, so if your kids love Star Wars, you are safe. Be prepared, it’s really done so well, but your head will spin. You will think about it, you will want to know more, and if you were indifferent about seeing it, see it, you will be happy you did!

Here’s a look at the red carpet from the World Premiere of Star Wars: The Force Awakens –

* I attended the press event to cover the #StarWarsEvent and then received an invitation to screen Star Wars: The Force Awakens to share my thoughts with my readers. If it’s not obvious in my writing, please know, all opinions are always my own.