I mentioned in my last post where I interviewed Elijah Kelley that I love to sing.  I really enjoy music.  I think that sometimes, I have moments that I could totally break out into song.  I am not crazy enough to do it, but I sure would love to see what would happen if I did.

Well, maybe because I love music so much, I found Strange Magic to exceed any of my expectations.  I mean, with a mastermind like George Lucas behind a film, it would be hard to go wrong.  Fifteen years in the making, even George himself mentioned the process of picking just the right songs, “Well I love music.  Music’s a huge part of my life, I love all kinds of music, and obviously I listen to music every day, on the radio, top 40 and all that kinda stuff but I also listen to a lot of other kinds of music.  But with this one, one of the inspirations was, I wondered if I could tell a love story using love songs, I could just take them and string them all together so they actually told the story, which was the original challenge.  In the beginning, the movie was about twice as long as it is now which means it had about twice as much music and I feel pained at the fact that some of the sequences were, cut.”  And he continues, “We don’t go through long periods without music so to me, it’s fun and again there’s the part where you actually have to tell a story, so I think it melded correctly between the actual story and the dialogue and the characters and the music, and feels like it belongs together, to me anyway. ”

Strange Magic, for me, was the perfect animated film.  With the animation so realistic, yet obviously set in a fantasy world, I felt that the world was real.  And the story.  Ahh, the story, as George mentioned, “Well it’s a story that needs to be told to every generation you know because the little girls growing up, or boys, they don’t know any of this stuff, by the time they reach 12 they’re very confused.  And, even though we all know it, and oh I’ve seen that, well that’s been told over and over and over again, and well it needs to continue to be told over and over again, you can’t sort of let kids slip through the cracks and say oh yeah, I was in the generation that didn’t get that message.  The message is so simple and, you know it’s been around for thousands of years and it can always be retold.” 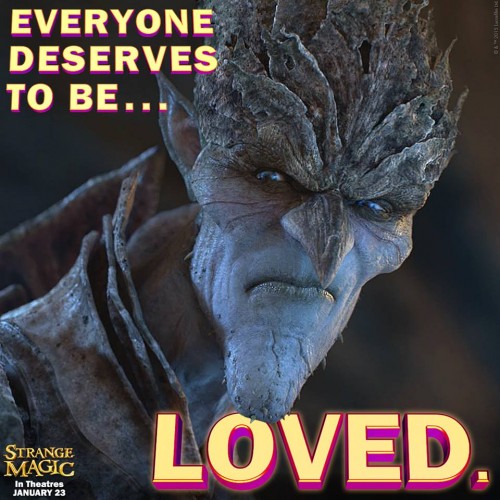 Yes! Everyone deserves to fall in love.  “It’s a story that has been told a million times, but can still be told again.”

With the story being told in song, with talent such as Elijah Kelley, Alan Cummings, Evan Rachel Wood and Kristin Chenoweth, the music…ah the music – put it this way, the soundtrack is out, and I already have it downloaded.

This movie is for all ages.  And I don’t mean it’s just for kids, for yes, that it is, but it’s for teens and adults too.  The story is timeless, and it is played out so beautifully.  It’s cast perfectly with voices of gold, and the animation is visual eye candy, making this one of those movies that you will want to go see on the big screen. 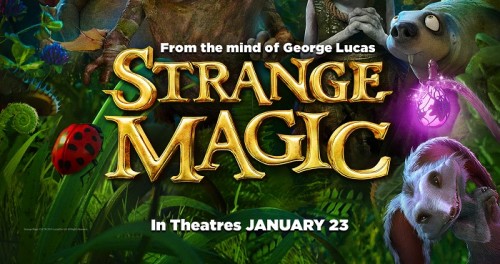 “Strange Magic,” a new animated film from Lucasfilm Ltd., is a madcap fairy tale musical inspired by “A Midsummer Night’s Dream.”  Popular songs from the past six decades help tell the tale of a colorful cast of goblins, elves, fairies and imps, and their hilarious misadventures sparked by the battle over a powerful potion.  Lucasfilm Animation Singapore and Industrial Light & Magic bring to life the fanciful forest turned upside down with world-class animation and visual effects.  Directed by Gary Rydstrom (“Toy Story Toons: Hawaiian Vacation,” “Lifted”) from a story by George Lucas.

*I was invited by Disney to take part in the Strange Magic Event.  All opinions are my own.