After winning the Oscar for Bridge of Spies, Mark Rylance now plays BFG, the Big Friendly Giant in Disney’s The BFG. With a larger than life character, along with Jemaine Clement as Fleshlumpeater, these giants both on-screen and off talked about their characters and what it was like to act like giants.

Mark is as cute in person as he is as the BFG. His eyes dance when he smiles. He’s very soft spoken and truly was a joy to interview. Jemaine talks about how “stupid fun” it was playing a giant.

Mark: Oh. Well, every morning it took about an hour and a half of them sticking glow in the dark marbles on us and battery packs and having a lot of painted dots painted on, about 45 minutes of having dots painted on your face through a hockey mask, a tight hockey mask. So there was a lot of time to think and listen to music or just get yourself in a certain head space. Apart from that, I don’t know how you prepare, but it’s just playful. You just start to play like a child really.

You think what do I need, here comes a 50-foot giant into my cave who’s gonna eat my little friend, I need to distract him, what am I gonna do? And it’s clear rules to the game, and you just start to play. I mean what was fun for us was in motion capture, there are no cameras, there are no marks, there’s just like a playground isn’t there? You just start to play, imagine it and speak the lines.

How hard is it to speak giant?

Mark: Very hard. Very hard indeed, I don’t think there are any actors in the world that could have done what Jemaine and I have done.

Jemaine: What is that actually, it’s improvising in giant.

Mark: My favorite word I’ve decided is telly-telly bunk box. I think that’s such a good word for the television.

Do you use it on a regular basis now?

Mark:  Whizzpoppers yeah. Are you all happy about your kids having a whizzpopper word?

Mark:  An English mom just told me that her son went in with a story, and it included the word fart and the teacher rejected the story and said other parents would be offended, that fart was a swear word, I don’t think fart’s a swear word. Is whizzpopper a better word?

Jemaine: I think it’s better. For people to have known what it is, they have to have read a book. Or tThey can see the movie.

Jemaine, how much fun did you have with this particular giant ‘cause I mean, he’s very scary but at the same time he’s hilarious.

Jemaine: Yeah he’s really fun. The bad giants, well Mark was filming all the time, the bad giants we would get to rehearse our motion capture and just walking around like big, lumps of meat, and that was really fun. You know, smashing things and intimidating people and being stupid is fun.

Jemaine: My son really loves it. He helped me a lot actually. I read him the book again when we got to Vancouver, he’d already heard it, but if he didn’t like the voice he’d go, no the other voice, and that’s how I found the voice was he’d guide me.

Was there a particular scene you enjoyed filming the most being captured the most?

Jemaine: Oh, I think the first time that I come and see Mark in his cave. And I love that part where I ask if you’re there, and you say no.

How much of the movie did you adlib?

Jemaine: Little parts like that part was ad-libbed. But again the vocabulary reins you in a lot.

Mark:  Yeah, I mean he’s a genius ad-libber, and you know, and a lot of the Giants were really such clever improvisers and comedians and stuff, so there was a lot of space. Steven wanted the bad giants to expand from what Roald Dahl had written and each of them to have characters and things like that. I think Sophie and I stuck pretty closely to the script that Melissa had written, the adaptation of the book; I don’t think we improvised much. I probably put in lots of little noises and things like that between the lines, yeah. 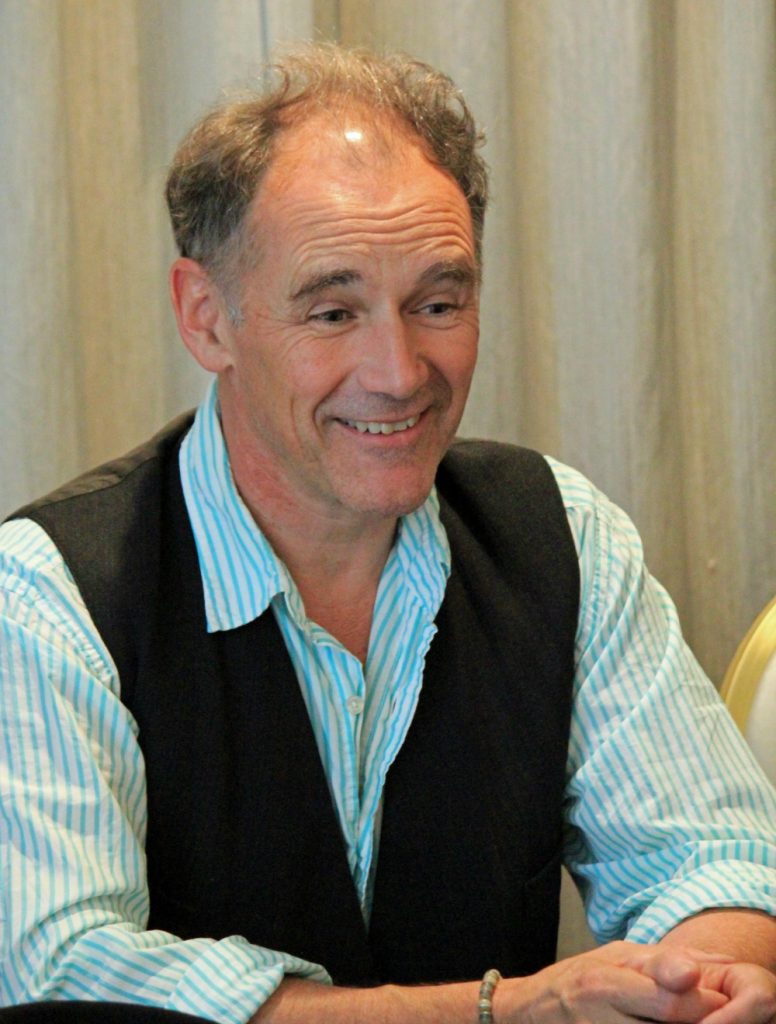 Do you have a favorite scene with Sophie?

Mark:  Oh, so many of them. I think the thing that someone asked me on television this morning what was one of the difficult things about being BFG and the most difficult thing is letting a young person go isn’t it? That (is something) every parent has to do. My parents are high school teachers so every year I would know that there were favorite kids that really resonated to their work or were witty or just wonderful kids. It was always sad every year that those kids had to go off to college and marriage and their lives. So that thing of being an adult who really loves a young person, and if you really love them, you have to encourage them to leave you and to go away. That is a scene I love very, very much, it’s on the hill at the end, she doesn’t even want to go away, she thinks she’s gonna stay and live there, but he knows that she’s got a wider life to lead. She’s mortal of course, and he’s immortal, so I was thinking yesterday that the sequel I’d like to see would be when Sophie’s a 90-year-old woman and she’s had a family and maybe she has a grandchild and the BFG still visits her, he’s the same of course. But he visits her maybe in her old people’s home and that friendship after she lived her whole life, that would be quite resonant wouldn’t it?

Yes, that would be amazing.

What was it like coming off of winning an Academy Award and then going into this film?

Mark:  Well I made this film before I won the Academy Award yeah. So, it’s more what’s it like next Monday I start Ready Player One. It’s a little bit more pressure, but really that’s just an illusion. But you could give yourself a bad time about it.

What do you hope kids take away from The BFG?

Mark:  Well, I think that the film tells a story of what kids have to offer older people, that older people get tired, they lose faith, they think maybe the world is just a jungle, a dog eat dog kinda thing, and nothing will change. So best to just do the best I can, give some money to charity, be kind to some people, but the big problems, nothing,’s gonna change, and we get tired. Young people don’t have this; there’s still the bravery and the hope like Sophie does to say, “we don’t have to put up with this, we can stop these people eating kids, let’s go to the Queen”. There’s such a lot of criticism of young people, and things seem so hard for them. Certainly for my daughters. Life looks so difficult and hard, but they’re so essential that they keep their bravery and hope and don’t get pressed down by the fears and the apathy of older people. It’s not their fault we’re just tired. I think that young people can change things, things can change you know? So that’s a good thing.I also think that you can get into phrases as a young person where you feel alone like Sophie did and isolated or with no friends. But the thing that happens to her because of that is she develops this great imagination, and when she does meet a friend, it’s her imagination that’s able to really solve the situation. So there are good things even in the worst situation. You know, so many great adults have grown out of very difficult childhoods where they’ve been bullied, or they’re poor, or they’ve been lonely or isolated and, not to give up hope in those situations I guess. I would have said that to myself when I had difficult times when I felt bullied or whatever. But those are the times that; it’s as Bob Dylan says, where did his imagination come from people ask him, he said, “well if you sit in a house for seven months of the year looking out at freezing cold, snowy weather in Hibbing, Minnesota you develop an imagination.” So there are good things in that apparently bad situation. 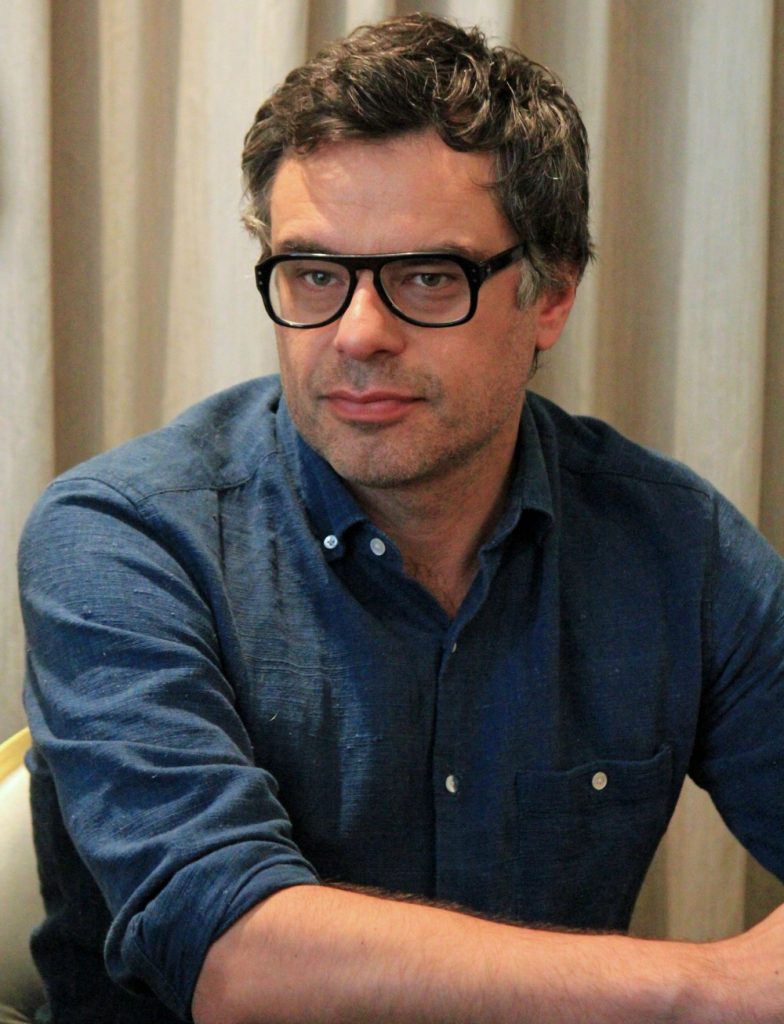 Jemaine, you really can’t have redemption without having a great villain. Disney stories are known for their heroes and their villains, and both of them are seared into our memory so, what kind of went into creating this villain that was gonna scare kids but yet they know that that’s part of the redemption story?

Jemaine: Oh boy that’s a difficult question. I think the bad giants are a satire of adults and that they’re very stuck in their ways and fearful of things. They’re so stupid that they’re dangerous, you know without realizing it. It can be funny but also there’s no reasoning with these characters because they won’t understand and they don’t care. There are no redemptions from these villains. It’s really for the BFG’s character; he needs Sophie to help him overcome them.

Mark: Melissa Matheson, who so sadly died, she did research into giants, and she was of the impression that at one time the Giants didn’t eat kids, didn’t eat people, they were warriors who fought with the people I think against the Romans. That’s the kind of mythology of it, with the Druids and Boadicea, the great female warrior of England, but maybe it’s even earlier times than that. So they’ve fallen into a decadent period, so I guess the hope is that with a little bit of dietary control on that terrible island, they’re put on a vegetarian diet, maybe they’ll change their habits.

*I was invited by Disney to attend #TheBFGEvent to share my experience with my readers. All opinions are my own.