Set visits are always fun, especially when it’s a show you already love to watch. ABC’s Black-ish is funny. The cast, the stories, the humor, everything about the show is awesome! Finding out that we were going to be spending time with Tracee Elis Ross, made the anticipation of the set visit that much greater for me. Not just a fan of her on the show, but because of who she happens to be.

When I was a little girl, my mother would play the Surpremes and was, well, still is a huge Diana Ross fan. When looking at my schedule for my last LA press junket with Disney and ABC and saw we’d have a chance to be on the set of ABC’s hit show Black-ish and chat with Diana’s daughter Tracee, I was stoked. Assuming she’d be super cool from watching her in interviews like this one on Jimmy Kimmel, where she talks about her childhood being a little different than most, I knew our time with her would be a treat! I was correct.

See, how fun is she? And when she met us at the set of Black-ish, she couldn’t have been more wonderful. Taking the time to look each one of us in the eyes and introduce herself, she was warm, beautiful and seemed as excited as the 25 of us were.

She took us on a tour of the set, where she shared different stories, opened cabinets and even the fridge to show us how it looks like a real, working kitchen. She even pulled some scripts out of the drawers for she forgets her lines and needs to have them close when she gets stuck.

Here’s a look at some of the photos I took while walking around on the set.

On the set, there are photos of the cast everywhere. Fun photos together but also personal photos of them when they were younger. I always love to look at those on the set.

The set is huge, the rooms are larger than a typical bedroom will be, walls move, and there isn’t a ceiling per say. Tracee compared the set up of this set versus the one she had on Girlfriends.

“Well, the nice part about the big rooms is it’s easy for shooting. I mean, on Girlfriends, it was smaller but they were all open, like there was always a wall missing because we shot on multi-cam, which means you shoot more like for an audience, you know. On this set, (the walls) all close, but like this wall (in the master bathroom) is usually off, ’cause they mostly shoot from this side for this room or through the door.”

Shooting a 22 minute show takes longer than you would think.

She also talked about working with the kids and what kind of schedule they have.

For the kids here’s blocks of school that they have to get in throughout the day. There’s a big calendar. Our Base Camp Assistant Director, literally marks out the blocks of time that they do for school. They can’t shoot late but on Fridays they can shoot till 10 o’clock, but only on Fridays. So you’ll bring them in, it still means that their hours are the same, but you can start later ’cause they can go later. So if there’s night scenes, you can only have them till 10 o’clock. So there’s a lot of protection and, you know, the younger kids, um, are 10 and 11, and then Marcus and Yara are both 15. I think when they turn 16, there’s like an extra hour we get, but they’re really protective and they, and they all have great teachers and they have a great school in a trailer that is half for the younger kids, half for the older kids. It’s kind of amazing, and, and their teachers are fantastic. It’s really kind of special, yeah.

And they are all SO talented.

Honestly, talent aside, yes they’re talented, but they’re wonderful people. I mean, it’s really joyful, I have to say. There’s that myth, don’t work with kids who are animals. 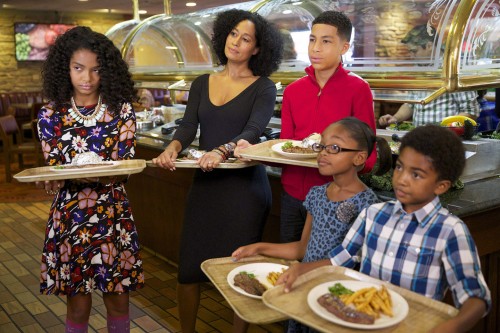 She continues while laughing.

I can’t understand that. I had such a good experience. I find they’ve been on the planet for less time than us and they’re not jaded, like they just have a pure joy that you can’t…I mean, when you see Miles and Marsai in the morning, they run towards you for a huddle up. It’s, it’s magic. I mean, there’s only so bad that they can be, right? So, and usually between takes, there’s a lot of giggling and laughing and videos being taken and pictures and everything, so I really enjoy it. They’re extremely talented. But like for example Miles, who loves sports. He loves basketball. He loves LeBron James. And I try to keep everyone focused. And I realize, I was going to bed one night and I was like maybe he doesn’t know what that means. I was like I need to explain that a little bit more because maybe that’s why everybody keeps saying focus, but maybe he has no idea what that means. So I thought about it, you know, a really good metaphor that I was really happy about, because he loves basketball, I was like well it’s like who had the ball. And so now that’s what I say, I’m like who has the ball, but even if he doesn’t have the ball, even if you’re not the one with the ball, who has the ball? So who is, you know, who, so that you stay in the scene and you stay in the game, right? So I was really proud of myself. (She laughs)  So they’re so young and they have such a grown-up job on their shoulders and they’re kids. They’re great kids, so it’s really fun.

So you are their set mom?

I guess so. I mean sort of it’s my way, you know, I’m that way with myself, so I can understand that. So let me think of a way to explain that to myself. But yeah, they’re fantastic. They’re wonderful and they’re happy and they’re, um, and it’s amazing to me. I mean, you know, they’re kids and when they get tired, they have to keep working.

He’s so talented. I think he’s a little comic genius. No, I do. I think they’re wonderful, so we’re really blessed, and there’s such a natural connection between all of us that I’m amazed, like it just kind of was there, um, genuinely from the beginning, but it’s only growing like (the characters we play), the more interesting it gets. It’s like we’ve been working together now for like a year-and-a-half, so we really know each other and there’s a sense of safety and connection, so it’s really, it’s really special.

How much are you like your character? Do you feel it’s important to share a message about being biracial?

I will say that I have been very clear, I’m not playing myself. I think it’s really exciting that she’s mixed. I’ve actually never got to play a mixed character on TV. I usually play a black girl. I think it’s exciting that she is mixed but the truth is we haven’t really been exploring that story line, and I have a real clarity that this is a role that I’m playing. So although I try and keep it honest if I don’t believe that sort of that’s the trajectory of what my character would do from truth, like that wouldn’t feel honest, but in terms of what my character’s doing, I leave that to the writers and it’s like kind of like magic when you get the new script because you’re like this is crazy or hilarious, but it’s not me. It’s not my story. So Bow doesn’t really, it’s not a, a matched experience for what my experience has been. I’m not married. I don’t have four kids, you know, so, yeah.

Do you have any input on Bow’s look?

I do have a lot of input on my wardrobe. We have incredible costume department, led by Michelle Cole, who’s a very incredible. My style is a little bit different than Bow, which I kind of love. Bow doesn’t wear heels ever. I wear heels all the time. Bow like rarely wears a heel, which I find liberatingly wonderful. It’s so great to not put heels on. One of the things that was very clear to me that I really wanted to bring to Bow is that she dressed hair and makeup wise really like a woman that had authentically. I don’t know a mother of four with a career and a husband and like all of that that can spend a ton of time putting together looks and like, you know, doing the whole thing. So I usually, I don’t wear eye shadow and stuff like that. It’s sort of like the mascara and the lipstick is kind of it, which I feel like is sort of her sort of regimen and routine. There’s usually not a lot of jewelry. I feel like the way she pulls from her closet is the way people pull from their closet, so it’s usually like a dress and sneakers or jeans and a cute top. So it’s not like styled, you know. Like I wear a lot more stuff, than she does, but I like to keep it really authentic. I usually, if we can, because of the shooting schedule, I usually remove my mascara and most of my makeup when I’m in the bed. Sometimes, we can’t ’cause we’re about to go back to another scene where I need to be, you know, have my mascara on, but mostly I try to be authentic and like not have makeup on when I’m in the bed. It’s a pet peeve of mine when you see an actress wake up with lip gloss. I’m like and somehow, it’s not on the pillow. Interesting. It’s hilarious. It’s so funny.

The show is fantastic.

I love this show. I mean, I laugh when I watch it. I love that you can watch it with your kids and it’s like it’s really fun. The stuff in the office kills me. It’s just great. Yeah. I’m really, I feel really proud to be on the show. 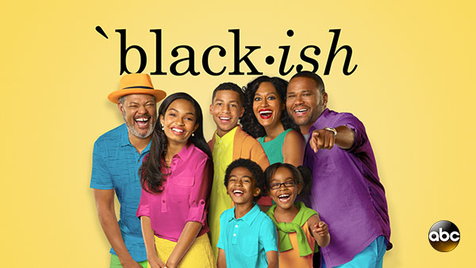 Be sure to watch Black-ish Wednesdays (that’s tonight!) at 9:30pm/8:30pm central on ABC. I watched this episode already, “Man At Work” and it is good and hilarious!

And a funny deleted scene to see just how much fun Tracee has on the set of Black-ish.

*I was invited by Disney and ABC to attend a press trip to visit the set of Black-ish to share my experience with my readers. All opinions are my own.