If you love fashion or just love the way a character looks on the screen, then you can appreciate a Costume Designer. Peggy Schnitzer has dressed many actors, and currently, she’s the Costume Designer on ABC’s The Catch.

ABC’s The Catch is a thriller that centers on the successful and very strong-minded Alice Vaughn. She isn’t the type of girl that messes around, for he is LA’s top private investigator. When her fiance cons her out of millions and disappears on the day they were to head out to elope, that is where the fun begins. The show keeps up with Alice as she goes on a private mission for payback. The fashion is best described as something you would see in a 1960s James Bond caper. With sharp style and a lot of class, it brings together the whole feel of the show.

Peggy Schnitzer greeted us at the costume department. She shared with us her responsibility for the dressing of the cast of The Catch. If you just took a look at the slide show, you got a peek of her work. Alice always looks flawless. And if you saw the pilot episode, you will remember this gorgeous dress. Custom made for Mireille Enos (Alice), it was just beautiful. 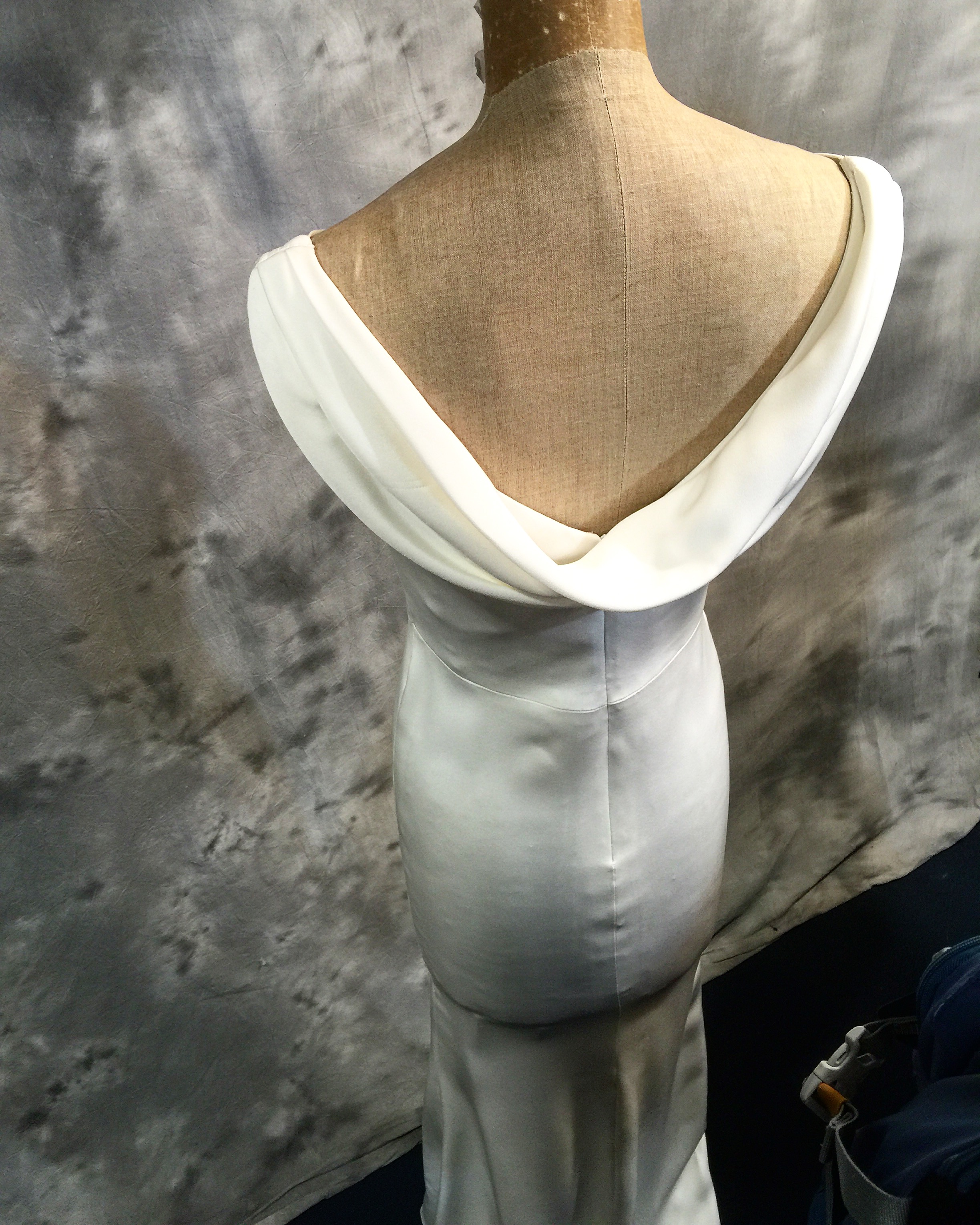 Who made the dress?

I made it! I was like, ‘I have just to do it once’. So I got different wedding dresses from the 30’s for inspiration. And then Carlos (Zapeda) , who you’ll meet out there, I bought the fabric, and we stitched it out. It was really amazing that we were able to do it. The thing with TV is it’s so fast, and you have just to come up with ideas and get it done very quickly. And, we had a little bit of lead time. So I’m like, we have to do this. It was great, and he was amazing. He just alters all their clothes to the T to their bodies. 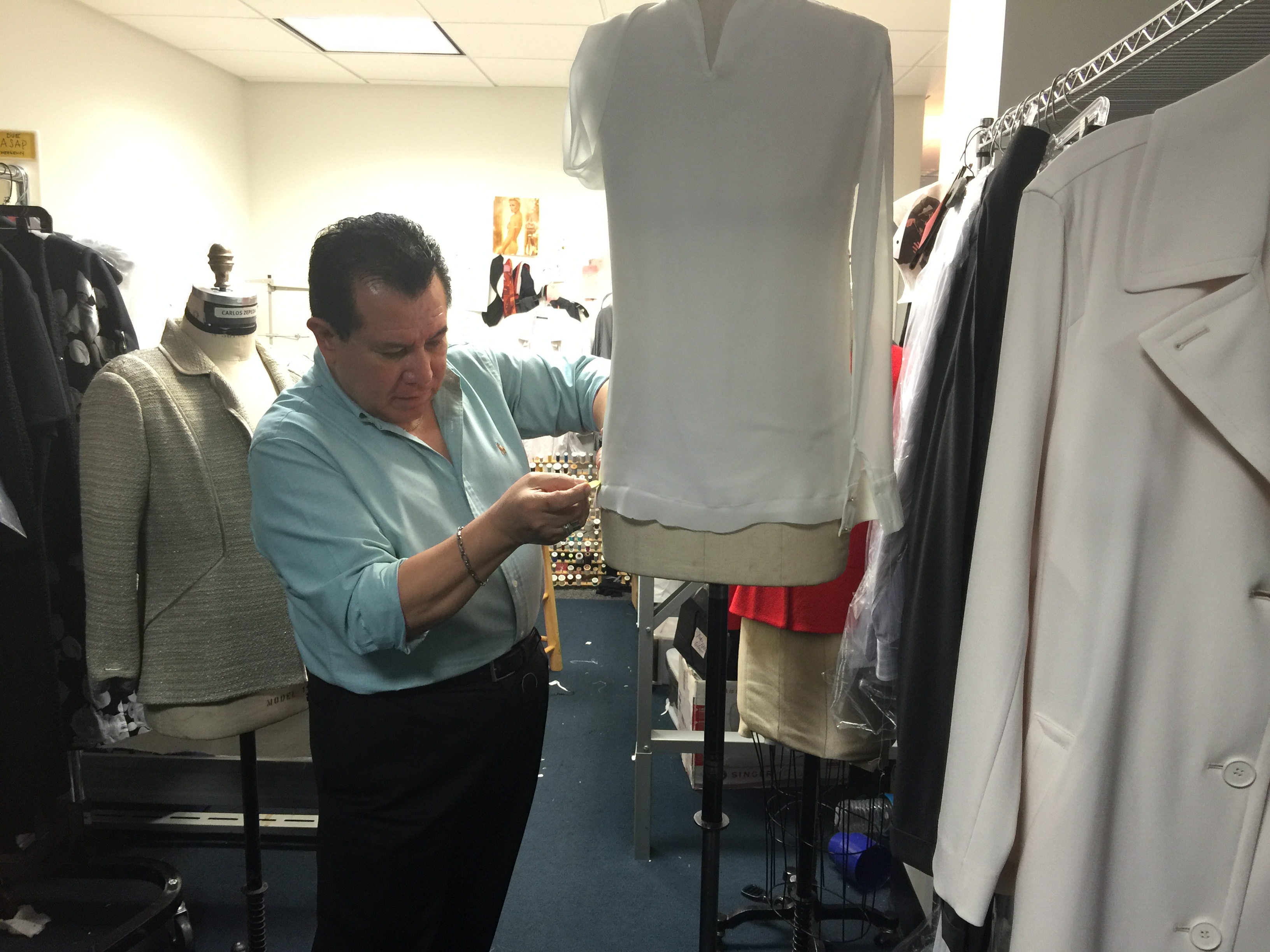 The clothes are all smaller than I expected.

She, well, you know, well yeah they’re tiny. They seem much larger on screen because their screen persona is very big but Mireille is maybe 5’2″, but she wears a lot of heels. And Rose is maybe five foot seven.

Where do you get your inspirations for the fashion?

A lot of times I look at magazines, I look at newspapers, I look at people on the street, and just get inspiration that way. And I look at other TV shows to just see what people are doing, which I didn’t want to do the same thing. This is a very specific aesthetic I think. 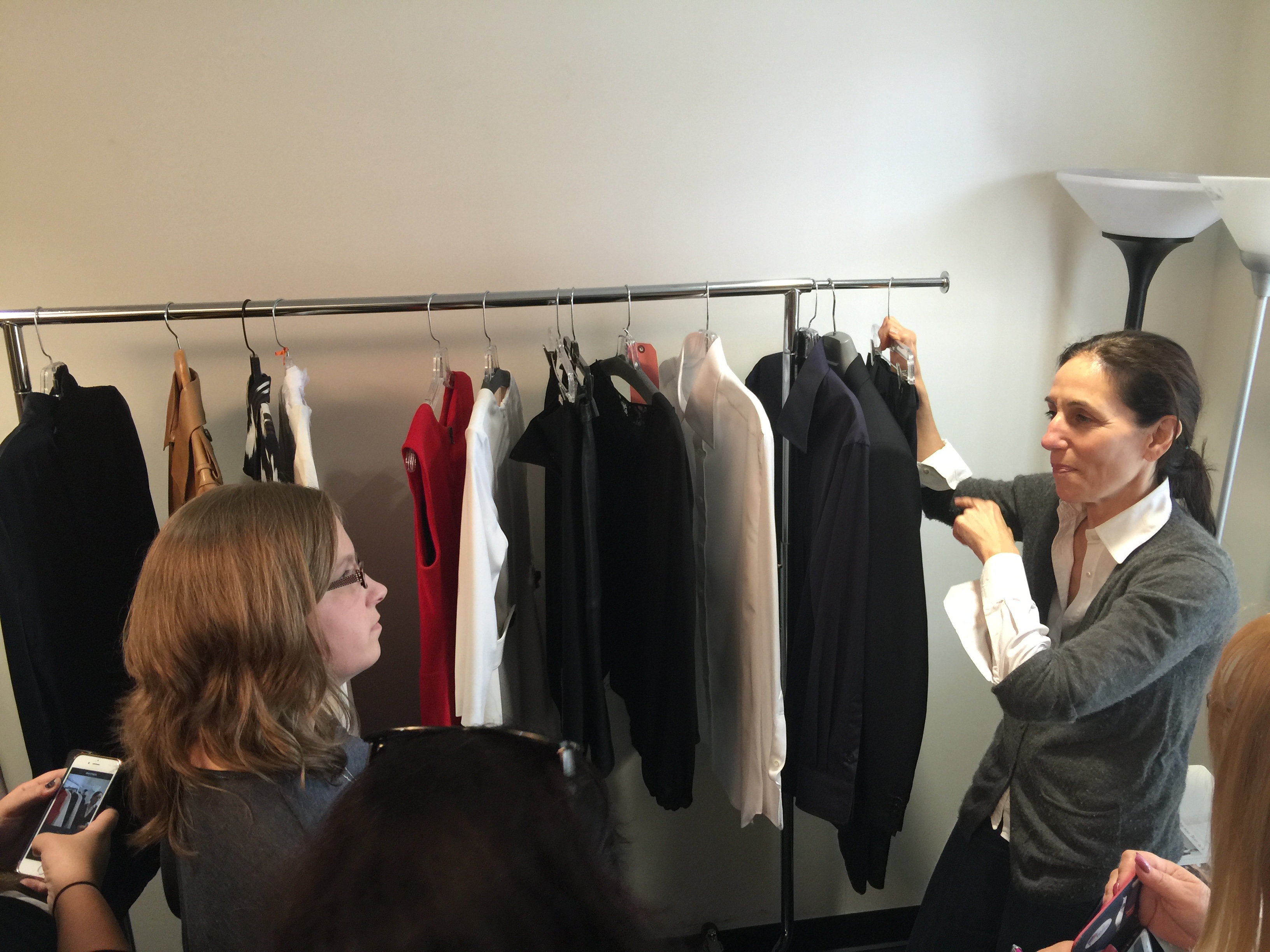 Can you talk about how you came up with the style for Rose Rollins who plays Valerie?

Well, I think at first, you know, I mean, I wanted her to be sleek, she has an, an amazing body. Strong but feminine. And I’m very lucky because in, in a lot of shows they don’t let you use a lot of black clothes. And here they do because when we go out to the set, you’ll see, their office, their business set is all glass and white. So it’s great to have darker shapes and people going through so you can see them. We can’t do like a lot of lights and beiges.

You know, we do the occasional white dress but then surround it, you know, it depends on what everyone else is wearing. But usually, I try and do it around what, Mireille and Rose are wearing, everyone else around them. Because it’s usually focusing on them in that environment. And I think for each character I just sort of look at them and from the written word from what Allan has written about the character, I sort of follow suit. I decide, really how he’s written that character, what she is to him, and go from there, coupled with what she looks like and her input too. I mean, there’s plenty of times she’s like uh-uh I don’t like that.

How do you pick out the wardrobe before you even have the script for an upcoming episode?

We do it a couple of times during the show. I would say in the very beginning when you get the character, and you get let’s say the pilot or the script, you start buying a lot of clothes like anyone’s closet. You would get a certain amount of dresses, a certain amount of skirts, jeans, you know, things that they would wear that while you’re shooting. So I don’t have to fit them every week and go- oh today for this scene for this whole play out- I don’t know what she’s doing action or just sitting. You sort of work it out with everyone else. I don’t always know what’s happening. Hopefully, the clothes that you buy, you’re spot on, and you can use them for – sometimes things come up, you know like, I don’t have a dress for that. What are we going to do? And then there are things that we might never use because it just isn’t going to work. So it’s a crap shoot so to speak. We love it, I mean, you know, you have to love doing this because it’s long hours and it’s a lot of work. But if you do, it’s, you know, the day goes by. And it’s really rewarding.

Tonight on The Catch

The AVI team takes on a new client, a female captain in the army, who is being harassed by her colleagues. Meanwhile, Alice makes a play on Ben that could put her in some very serious danger, and both Ben and Margot are shocked when an old friend comes to town.

Come back next week and check out some photos from on the set.

*I was invited by Disney to attended the Captain America Event to share my experience with my readers. All opinions are my own.