Jeremy Renner and Elizabeth Olsen, or as the Marvel Universe calls them, Hawkeye and Scarlet Witch, took some time to sit down with us and talk about Marvel’s Captain America: Civil War. One thing I have learned when talking to Marvel actors is that the interview will be entertaining. If you’ve read any of my other interviews with Chris Evans (Captain America), Anthony Mackie (Falcon), Chris Pratt (Peter Quill/Star-Lord), Paul Rudd (Ant-Man), Zoe Saldana (Gamora), etc. It’s clear to see they all have a great time making the films as much we enjoy watching them. They truly are like one gigantic family.

The Scarlett Witch was introduced to us in Avengers: Age of Ultron, and in Civil War, we really get to know her. She and Black-Hawk have a lot of on-screen time together, but during the interview, Elizabeth and Jeremy shared with us that they still hadn’t seen the film.

Jeremy: You guys see the movie? Yeah? We haven’t.

Elizabeth: I’m pretty sure we made the cut if we made this far.

If one of you dies, I’m not going to give it away.

Then Jeremy notices the Black-Hawk figure on the table.

Jeremy: Where did I get the boy band facial haired thing?

Elizabeth: And the moodiest expression.

Jeremy: (Laughing) Well, uh, yeah, that’s fine. It’s cool; I don’t know where you get these things, but…

Elizabeth: I love it. I think it’s the weirdest thing, and I think it’s awesome. My friend walked by the Lego Store in New York and took a photo of Scarlet Witch…

Jeremy: Like the hot toys are, really are great.

Elizabeth: No, this is a Lego. She’s such a weird Lego.

Jeremy: She has the snap-on hair.

Elizabeth: Yeah, it was so funny to look at; the weirdest facial expression! Yeah, it’s fun.

So Jeremy, in the comics your character is mostly deaf. How would you feel about them introducing that into the Marvel Cinematic Universe?

Jeremy: I keep hearing about that. It isn’t really kind of played out at this point, and not unless we say he’s got an amazing hearing aid or something.

Elizabeth: Right. Or maybe, like, you’re in an explosion.

Jeremy: It wasn’t kind of part of the conversation. We were focused much more on the alternate sort version of not the big purple mask sort of guy. He’s much more of the utility sort of guy. So yeah, they talked about that, but I don’t think it’s going to play out anytime soon, it may be a little late.

Elizabeth: Well, I don’t know. You could always be blown up somewhere and…

Jeremy: What’s that? (playing on being deaf)

Elizabeth: Yeah… (we all laugh)

Jeremy: Would that wear you down?

Elizabeth: That’d be too funny. We would laugh too much at it. No one would take it seriously.

Do you do your own stunts? 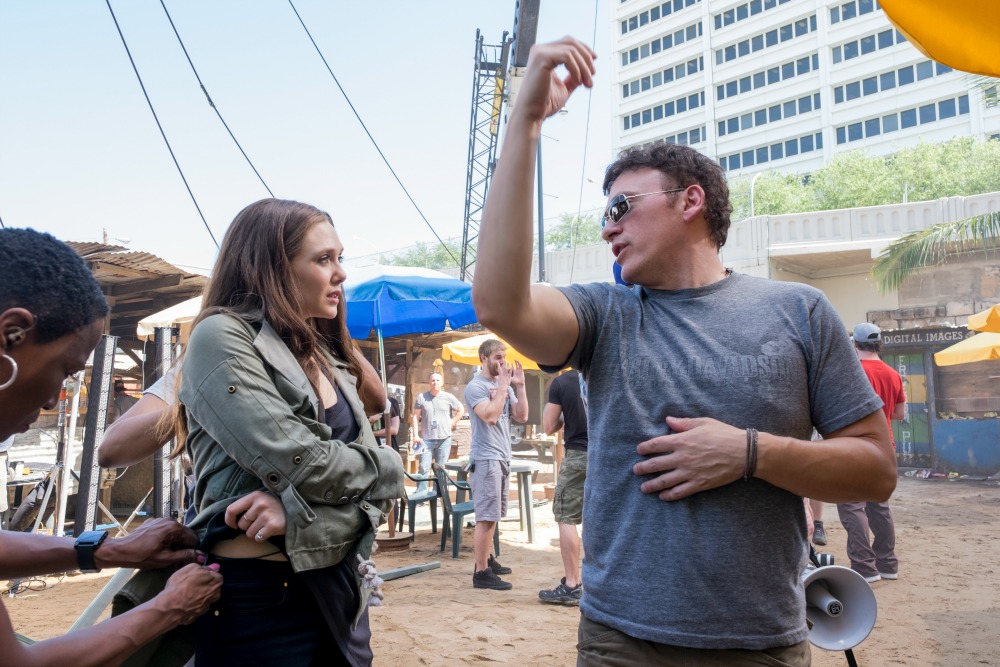 Elizabeth: I think we do as many stunts as we can. Then a lot of times they take a second crew out, or they’ll film things when we’ve already been wrapped from the movie. When they’re in Germany, and they might do stuff then. But when we’re filming, we do everything.

Jeremy: Yeah, just do it all. Almost all mine is just practical stuff. I don’t do much CGI. Except the arrows. When I fire arrows outside because it’s gotta go somewhere, right? (laughing) You know, not into the cameraman. But yeah, it’s ninety-nine percent of the script is me. This is fun and if I couldn’t, then the odd part is, this would be a boring job.

Elizabeth: Also, I don’t like having a stunt person do what I do, anyway. If they have to match a move because it’s not like a kick, or a roll, or a fall.

Jeremy: There’s one flip or something I cannot do and that I wish I could, but I couldn’t do it. So my stunt double did it. He’s badass.

What made you want to take on the role of the Scarlet Witch?

Elizabeth: I was already a fan of Ironman and Avengers. I saw it with my dad when I was working in Servia. It was about the second time seeing it, and it just came to Servia, and I loved it. Then when I told my older brother who loves comics he’s the person who can guess where everything’s going, and he’s right, somehow. I told him I was meeting with Joss, but I didn’t know what character it was going to be. Joss started explaining to me who the Scarlet Witch was and said, “When you look at the comics, just know you will not look like that. I will not put you in a leotard, cape, and a head cast.”

Then I started reading more about her journey, and I found the fact that her mind is the only thing that limits her and the ever possibility of this kind of insanity and being able to manipulate reality. She can manipulate her own reality, those kinds of things, to me, really cool. I didn’t know when they would come into play, or if they will, and I still hope we play around more with that part of her. I just think she’s a cool character, and it’s a lot of opportunity for storytelling.

So there is a lot of action and humor in the movie. Did you guys improv or did you stick to the script?

Jeremy: The Russo brothers were great. They’d always have alt lines for certain things and these sort of one-liners, and then they just let you kind of run with a bunch of different things, so I have no idea what makes a cut.

What’s it like working all together on the set?

Elizabeth: There’s a lot of jokes and a lot of inappropriate humor. Everyone’s a degenerate.

Jeremy: Yeah, everyone’s got a good attitude about it when we’re doing…

Elizabeth: I mean, like, Paul Bettany, who is in such an uncomfortable costume. He’s sweating through these prosthetics, and he can’t take them off, and he’s so miserable, and he is still one of the funniest people on set. I think everyone just has a good attitude. It’s a really awesome job. I’m so excited for us to keep going. Just because it’s so fun to hang out with everyone.

I think we all agree, even if it’s 2-3 hours in a movie, we love to hang with everyone too! You can check out these two and the rest of the Marvel cast in Captain America: Civil War next week.

*  I was invited by Disney to attended the Captain America Event to share my experience with my readers. All opinions are my own.