I was fourteen when I went to see Elizabeth Shue in Adventures in Babysitting. I really loved that movie. It was just so much fun. Being a babysitter myself at that time, I remember thinking how nuts that night was in the film and how I’d handle a night like that. Thank goodness nothing like that ever happened to me. Now, almost thirty years later the Disney Channel has made a remake with not one, but two babysitters.

Adventures in Babysitting with Sofia Carson and Sabrina Carpenter

Filming  Adventures in Babysitting over a year ago, Sofia Carson and Sabrina Carpenter sit down and share that they are excited to finally be talking about their roles in the movie.

Sabrina: We… We filmed the movie over a year ago. She turned 22 on set. And she just turned 23 two days ago.

How fun was this to film?

The two of them obviously have a great friendship. They respond jokingly.

Sofia: Actually, it was a terrible time…

Sabrina: We really dislike each other.

Sofia: That didn’t really help. The five kids are some of the most talented kids you could work with. They were so professional, and they were such a joy to work with. I wish I could babysit them.

Sabrina: They became, like, our family…We all became like a family, and we had, like, little parties every weekend, all of us. We were singing and dancing…

Sofia: A lot of singing…Karaoke and improv games, and…

Sabrina: We had the greatest time.

You two are so funny! What’s the funniest thing you can tell us about each other?

Sofia: That she’s not that funny…

Sofia: No, but that’s what makes her funny is that she knows that she’s not funny.

Sabrina: And I’m not funny. I’m so lame…

Sofia: But with the script, she’s so funny…

Sofia: No problem. Like, if she had writers for her all the time, she’d be so funny…

Sabrina: I’d be hysterical. Good thing I’m an actress. And Sofia is probably the funniest person you will ever meet. She doesn’t need a script.

Sabrina: Thanks. Love you.

Sofia: I love you. 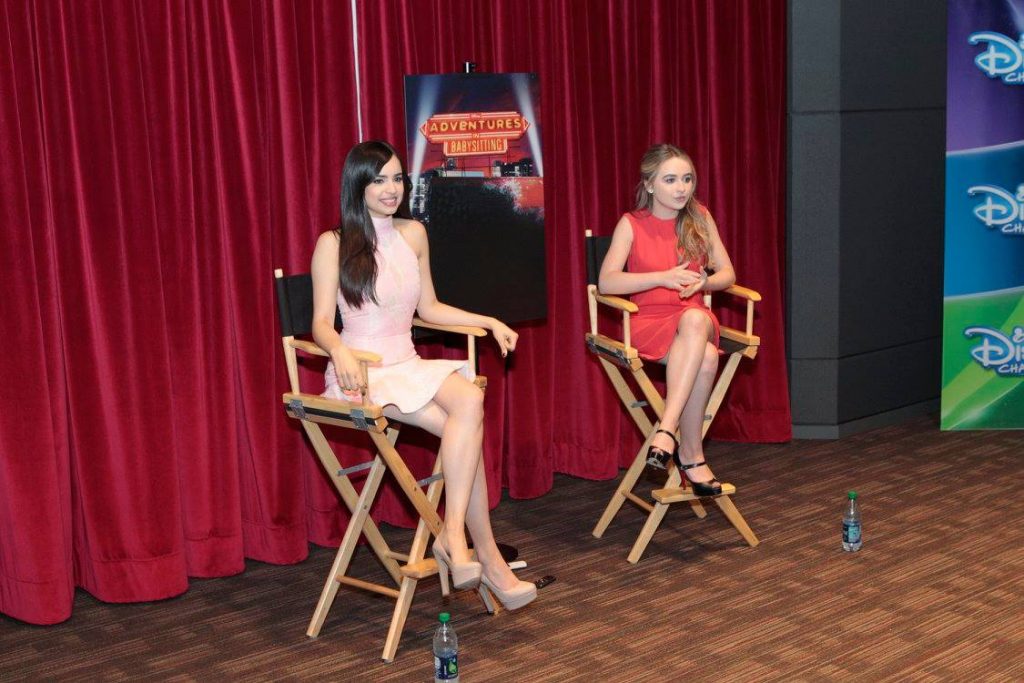 Had you seen the original movie before and how did your involvement come about?

Sabrina: Absolutely. Disney kind of came to both Sofia and I and we auditioned with each other. It worked. We’re very lucky that it worked out perfectly.

Sofia:I did see the movie. I was a big fan. My mom was a big fan of the movie. So to be able to create a new version of such a classic, beloved tale for this new generation, was something I was honored to do. And it was an incredible experience. Apparently, I have a thing with, like, sequels, and remakes.

Sabrina: Apparently me, too.

You mentioned you were only 15 when the movie was shot, but you were able to drive?

Sabrina: I got to pretend drive…

Sabrina: She would go. Sabrina, go right. Go left! I would take my hands off the wheel or forget to turn on my turn signal, ’cause I don’t drive.

Do you drive now?

Sabrina: I don’t have my permit. But we have a, a lot of bloopers of me in the car. ‘Cause, yeah, I can’t really drive. But…

Will there be the bloopers on the DVD/Blu-ray?

Sofia: Yes. There definitely will be Bloopers.

So are you guys more of a Lola or Jenny?

Sofia: I would say I’m kind of an in between. Lola is this really cool free spirited young girl who isn’t afraid to just live life, despite the consequences of sometimes making irresponsible decisions. But she’s really passionate about her art. And a very strong girl. And I’m also very passionate about… I think we both are, about what we do about our music and acting. And we’re both also… I’m just gonna answer this for both of us…independent girls. We have a really strong, incredible moms. And they taught us to be strong girls or represent girl power. And Lola and Jenny are both like that. ‘Cause Jenny, even though she’s a little bit more inside the box, she’s still a strong, powerful young girl. And we both save the day together.

Sabrina: What she said. It’s true, though! I think just because both of us… Like, like I was… I was saying earlier, you know, I take from Lola because she’s got that edgy sense of humor, and she’s very passionate about her art. Whereas Jenny can’t be creative to save her life. I think that’s kind of what I spend my life doing. But I will say that I am sort of a perfectionist like Jenny…Jenny’s also not funny, like me!

Sofia: My favorite part of the movie… One of my favorite scenes, besides where we first meet, ’cause I think that totally shows the dynamic of these two new babysitters and gets you ready for the adventure that you’re about to go on and the rap battle.

Sabrina: I love the simple bathroom makeover scene for Jenny. She’s not getting a full makeover where they’re glamming her up and making her look like someone she’s not. But just kind of letting her hair down in a way where she can be a little bit more adventurous like Lola. It just kind of shows you what she’s taken from this whole adventure that they’ve had together, and, um, how she’s a little bit more confident than she was before. I also love the rap battle scene. Well, we go to be rappers for the first time in our lives. And…

Sofia: And the last. And it was just such a fun scene to shoot. It was so high energy. The music was awesome. The energy in the club was great. The kids were so cute and so hysterical. We had a great shoot. And I also that moment was kind of the beginning of their friendship, because until then, they never really understood each other or really saw anything in each other they could relate to. But in that moment they kind of were on an equal ground for the first time. And despite their differences, they start this really beautiful friendship throughout the film that, um, is my favorite part of the movie.

What is being in the public eye like for you?

Sofia: It is an honor to be able to be in a position where we can influence young girls. And it’s a big responsibility, but it’s a beautiful responsibility because, as we were growing up, we looked up to actors and singers to be our role models as well. And their voice, and what they stand for always influenced us so much. I think we’re very lucky if they were to tell stories, like Lola and Jenny’s story who represent girl power ’cause girls can take over the world. I think it’s important to remind them of that. So I think it’s an honor to be able to share these stories with them.

Sabrina: Well, also the fact that I think Sophia and I both since we both had such big dreams and aspirations .to what we wanted to do. And I think the fact that we’ve been able to figure out those dreams and not only get to do them every day but love what we do every day is hopefully an inspiration to girls everywhere. And boys. To figure out what they want to do and make sure that whatever they do in life, that they love, so that way they don’t have to work a day in their life.

Who were your role models growing up?

Sofia: My role model has always been my mom. She’s the most incredible woman in the world. And I always strive to be just a little bit like her every day. Even if it’s just, like, 10% of what she is, that would be enough, ’cause she is truly my hero.

Sabrina: My mom and dad, and my older sisters. My whole family. The Carpenter bunch is kind of a special bunch. And I think that my parents always stressed in my head that I was unique and that I was special and that I was different. And then I could do whatever I put my mind to. Those are the kind of people that you want to have in your life forever. And I’m lucky to call them family.

Which scene was the most difficult to shoot?

Sofia: The most difficult scene to shoot. Maybe because the time constraint and It’s a really emotional scene between Jenny and Lola. I think we had a total three minutes to shoot it and it was the climax of the movie emotionally between the two girls. It’s when Lola confesses to Jenny that she told her love interest, Zach, that she didn’t want to go to the concerts. And Jenny realized that her heart is destroyed. And then Lola at that moment really feels absolutely horrible. We were both in tears, and I remember, it was such an adrenaline rush because it was freezing outside. And it was, like, 10:00 at night. It was freezing. She had to be out of there in, like, two minutes. We had one shot for each close-up. And we did it. And it was such a rush. And it’s one of my favorite parts in the movie.

Did you take any of the clothes when the shoot was over?

Sofia: I took Lola’s bra home, too. When you find a good bra, man.

Want to see the first ten minutes of Adventures in Babysitting? Here you go!

*I screened Adventures in Babysitting during a press event for the movie. All opinions are my own.