I just returned from the Ant-Man and The Wasp Event, and friends, my head is still spinning. If you are still like many, and not over what happened in Infinity War, this movie could be the perfect pacifier. With the perfect mixture of romance, family, action, not to mention it’s hilarious and heartbreaking, Marvel once again has knocked it out of the park with no doubt their next blockbuster. Here is my Ant-Man and The Wasp review.

Where does Ant-Man and The Wasp pick up?

“What’s exciting about ‘Ant-Man and The Wasp,’” says producer Kevin Feige, “is it’s really a sequel to two movies. It’s a follow-up to ‘Ant-Man,’ while also showing the af?ermath of ‘Captain America: Civil War.’ For me, there’s a tremendous amount of excitement when you’re able to tell stories like this and combine characters from their origin movies and then layer in their appearances from other movies. Because of this strategy, Ant-Man post-‘Civil War’ has now been exposed to a much bigger audience.”

5 Reasons to See Ant-Man and The Wasp

Now a fugitive with her father, Hank, the brilliant scientist has used her ?me in hiding to master her new role as The Wasp, but she isn’t quite ready to team up with Sco?tt for their most important mission ever. But returning her family depends on it, so she is forced to seek his help.

Ladies first. Not only is this woman able to claim the fact she is the first woman Marvel character to be in a title of a movie, but she can do it with a girl power, hell yeah! Now that Hope is wearing The Wasp suit, taking on the role of The Wasp suits her personality. She is a badass in real life and add her tight-fitted suit and she is The Wasp. Evangeline Lilly is beautiful and her character is one for kids everywhere, but especially little girls to look up to.  She and Paul Rudd make the perfect team, possibly both in and out of their superhero suits.

After his exploits with the Avengers in “Captain America: Civil War,” Scott Lang, the good-hearted ex-con, finds himself under house arrest. But when he faces the decision to once again don the Ant-Man suit, Scott is conflicted, as he is struggling to find a way to get his life back on track and be the best possible father to Cassie that he can be.

I mean Ant-Man is in the title so he would have to be on of the 5 Reasons to See Ant-Man and The Wasp. If you think of Scott Lang becoming Ant-Man in the first film, and then having found himself with a little more humor in Civil War, you will see the funny stayed with him in this film. Paul Rudd has the face that women love and men trust. He carries that appeal well on the big screen and his scenes with Evangeline Lilly and Michael Douglas will bring you all those different emotions this film encompasses. But for me, it’s about the humor, make me laugh and you win. If you are a fan of the humor of Thor in Thor: Ragnarok and or Chris Pratt in  Guardians of the Galaxy, you are going to love Ant-Man every second he is onscreen.

As the original tiny Super Hero, inventor of the Pym Particle and founder of Pym Technologies, Hank Pym, now a fugitive with Hope, faces his most important mission ever as he confronts the repercussions of his past while trying to protect the future of his family.

Michael Douglas is back and has a lot of onscreen time in Ant-Man and The Wasp. His scenes with Paul Rudd are so funny and when you add Evangeline Lilly to the mix, you have movie magic. Since Scott made it back from the Quantum Realm, Hank is on a mission to figure out if there’s a chance of Janet Van Dyne being alive. The big question here, does he ever put on the Ant-Man suit?

Janet van Dyne is the original Wasp to Hank’s Ant-Man. An accomplished scientist in her own right, she saved millions of lives by disarming a missile bound for the United States. But in the process, she became lost in the Quantum Realm—a subatomic world beyond our own. Now her family believes they just might be able to bring her home.

Michelle Pfeiffer is always so good, and there are few that could pull off being a superhero at this point in her career, but she can. Janet Van Dyne is one of the founding members of the Avengers, so her character is important. Marvel makes you wonder with the happenings of Infinity War what the significance of her character may carry into the next film.

This elusive foe poses the biggest threat to Hank and Hope as they try to unravel the truth from their past, but when Scott? joins in he, too, becomes a target. Her reasons are personal, and Hank’s newest piece of technology is at the heart of it all.

Knowing this character was originally a man in the comics and Director Peyton Reed decided to have a woman play the role makes Ghost that much more intriguing. Hannah John-Kamen is one to do her own stunts and Ghost is a character that you care about even if they are the bad guy. She is a villain that doesn’t want to take over the world. Ghost isn’t after money or to be recognized. She is the way she is because that is how she survives. She needs the same thing that the heroes need. This makes the storyline unique.

“The Three Wombats,” as Hank inelegantly dubbed the trio of petty criminals who are Scott? Lang’s friends, provided some of the more hilarious and memorable moments in “Ant-Man,” but their escapades with Ant-Man left? an indelible impression, showing them they too could be heroes.

That’s a great look at highlights from the first Ant-Man. Luis, Kurt and Dave are back and they are funnier than before. These 3 get involved in the mix, now that Luis owns the security store. Michael Peña once again tells his stories that are always hilarious and Hank, well he’s as impressed as the first film with the team.

What Marvel has done with the visual effects of this film is mind-boggling. With the quick growing and shrinking action, there are times you are surprised to see they are small, or big. The scale has been played with from car chases to buildings. When you look closely at the set, particularly of scenes with the Pym Lab, watch for the creative ways small everyday objects are used. It a reason you’ll watch Ant-Man and The Wasp more than once.

Yes, plural. There are 2 and you won’t want to leave until you have seen them both. That’s all I will say to that. 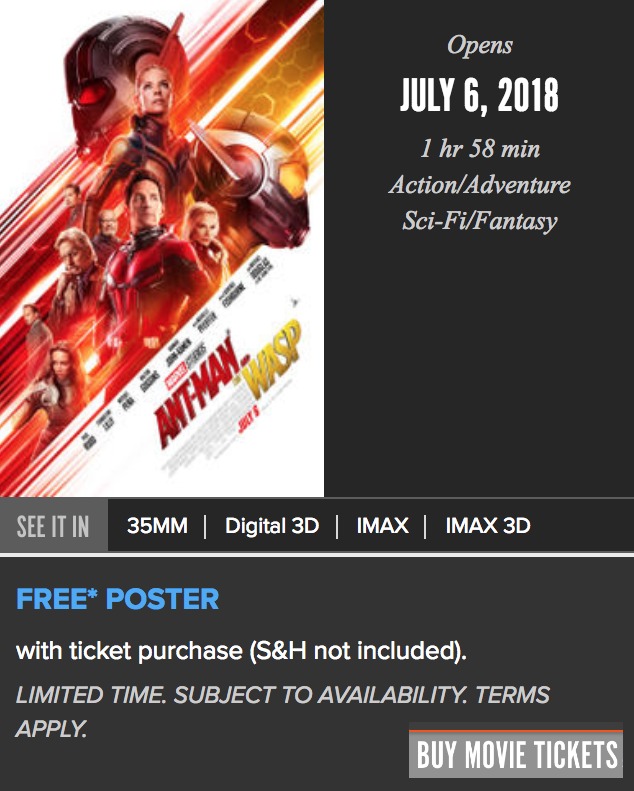 * I was invited by Disney to attend #AntManandTheWaspEvent to share with my readers. All opinions are my own.