It’s been a few months since I’ve been to LA. My summer had me crazy, putting Trippin’ with Tara on the back burner, but now all is getting back to some type of normal, and I am heading back to LA for Queen of Katwe & ABC event. See what I will be up to beginning this coming Monday. I have a feeling you are going to want to follow along. 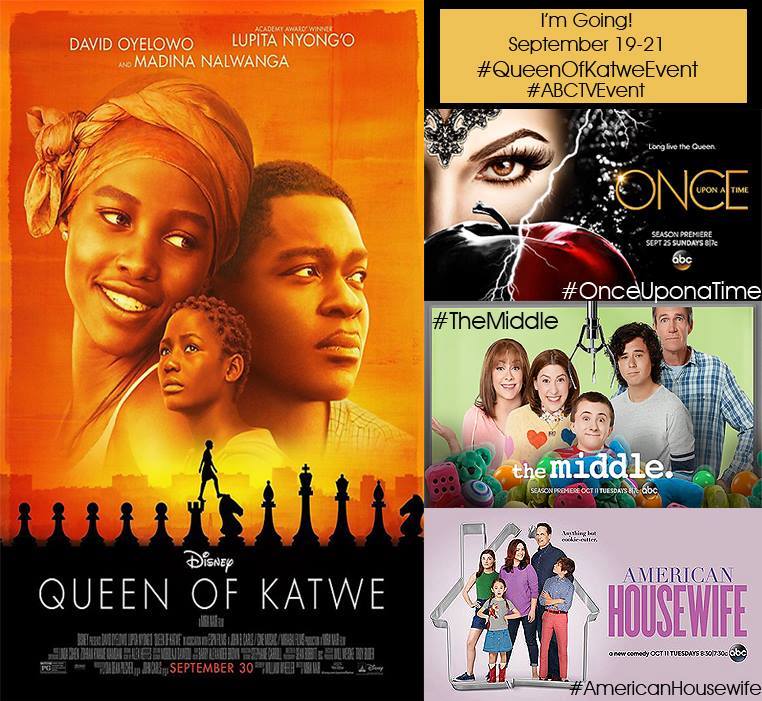 Back in LA for Queen of Katwe & ABC

We will begin our event Monday evening with a pre-screening reception with Executive Vice President of Production Tendo Nagenda as well as the “African-American Disney Resource Group.” Nagenda is the development executive responsible for the release of “Queen of Katwe,” about a young African chess champion and starring Lupita Nyong’o and David Oyelowo. It will be interesting to hear the story behind the production of the film.

We will begin our day with a screening of the season 6 premiere episode of “Once Upon A Time,” “The Savior” followed by a Q&A session and photos with Co-Creators and Executive Producers Edward Kitsis & Adam Horowitz.

After hanging with some serious big screen talent, we will head to the production studio for a meet and greet with available actors from “The Real O’Neals” and tour of the O’Neal family’s house set. I have met several of the cast before, and this will be a treat! Such a funny show and a great group of actors to hang with for the afternoon.

Then, we will dig deep for that LA energy as we head out for the QUEEN OF KATWE premiere at the beautiful El Capitan Theatre where we will watch the movie with the invited VIP’s followed by an incredible after party where I am sure there will be photos to share.

Up early to wipe the sleep from my eyes as we finish the event with not one, but two more set visits.

We will then head to another studio stage for a meet and greet with “The Middle” cast Patricia Heaton (“Frankie Heck”), Neil Flynn (“Mike Heck”) and Atticus Shaffer (“Brick Heck”) and take photos on the Heck House set. We will then tour of “The Middle” wardrobe trailer with Costume Designer Julia Caston. I have been on the set and chatted with a few of the cast member before. This experience is such a treat!

Seriously, a very busy two days, but one that will be full of fun and secrets that you can only see by following the event.

ONCE UPON A TIME

*I have been invited by Disney to experience the mentioned press junket to share my experience. All opinions are my own.