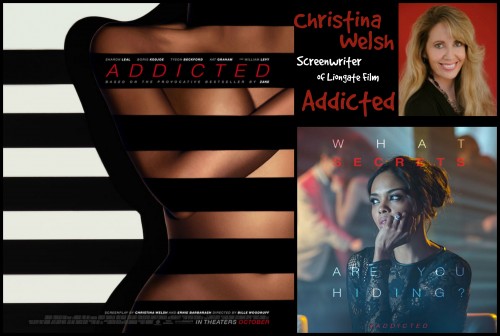 She may not be a household name yet, but audiences are becoming ADDICTED to Christina Welsh’s work.  As a woman making her way in both a male dominated world of Hollywood screenwriting and adapting a novel written primarily for African-American audiences, Welsh is no stranger to taking risks, forging unfamiliar paths and achieving success.

Welsh’s latest screenwriting project is the sexy, provocative thriller Lionsgate’s ADDICTED, based on the best-selling book by Zane and starring Sharon Leal, Boris Kodjoe and international star William Levy (who made audiences swoon on “Dancing with the Stars”), opening in theaters on October 10.  Welsh has an extensive background in screenwriting and is best known as the screenwriter of IF ONLY, the romantic drama starring Jennifer Love Hewitt and Tom Wilkinson.  IF ONLY became an international hit when it was released theatrically around the world and was a ratings winner for ABC Family in the U.S.

While the story, setting and voice of the novel ADDICTED are written from an African-American perspective, Welsh was able to adapt it for the screen by highlighting the women’s aspects of the story.  She tackled the provocative and sexy story of a relatable woman who takes a turn down a dark path and ultimately realizes she’s addicted to sex.   In the end, ADDICTED is a woman’s story that is accessible to all audiences, adapted for the big screen by a woman.

Armed with a unique background, Welsh honed her writing skills both as a journalist and a writer, and spent time behind and in front of the camera before making the transition to full time screenwriting.   Welsh’s script and the film took years to come to the big screen.  Welsh first began adapting ADDICTED for the screen in 2006.  Although Welsh initially worked on the screenplay until 2008, the film didn’t go into production until 2012, and finally, in 2014, it will be released in theaters — proving as Welsh says, “Sometimes it takes years for something good to suddenly happen overnight.”

Take a look.  It’s steamy!  Starring  Kat Graham, William Levy,  and Boris Kodjoe, and all three of them are HOT!

Addicted will be in theaters October 10th!

*The above information was provided to me to share with my readers by Liongate.  All opinions are my own.