When interviewing people in the entertainment industry, I never really know what to expect.  I have learned that no matter how big or small the actors are, I am rarely right on my assumption of how the interview will go.  I mean, let’s take Dave Bautista for example.  Dave being a former professional wrestler, I expected a big guy to enter and kinda command the room.  Well, that wasn’t quite the case at all. 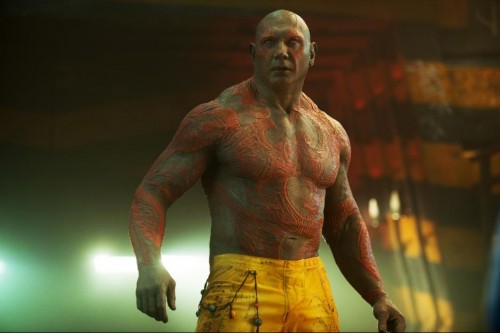 With 25 bloggers in one room sitting at a large conference table, Dave entered the room and is visibly overwhelmed.  He’s a performer both in the ring and on the big screen.  He’s big and strong, but instantly I could see that he really wasn’t more than a gentle giant.  And as we spoke, I learned why he took the role as Drax, and what made it hard to keep a straight face on the set while filming Guardians of the Galaxy.

How much did your WWE training help prepare you for this movie?

No, it’s weird because it’s so different.  I guess, being athletic helped me a little bit.  I picked up on stuff kinda easy.  But still, it’s just so different from anything that I’d ever done.  We had really good stunt guys and kinda relied on them for their advice, and they showed me how to do stuff, and I would do it, I’d mess it up and they’d say, well, try it this way if it’s easier.  And I’d say no, I like the way you did it because it looks cool that way.  So just show me how to do it that way, and I’d just do it and do it until I picked up on it.

Were you in makeup for hours at a time? 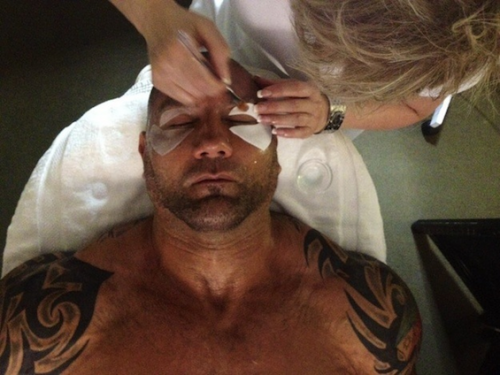 Yeah, it typically took about four hours to apply and about an hour and a half to take off.  But it varied.  When we first started, it was longer to put it on; longer to take it off.  But toward the end of the film, it was about three hours, actually, to put on- an hour to take off.

Did makeup limit your movements at all?

A little bit, yeah, it did a little bit.  Yeah, because there was, you know, all the, uh, prosthetic decices, they were all glued on, you know, so it did limit me a little bit, but not, not tremendously.  I mean, considering, you know, the visual and the makeup.

What do you think attracted you most to the role of Drax?

Oh, it’s easy.  It was because he’s a nut job.  It’s because I’ve been wanting to do a role that wasn’t kind of one noted.  You know, it’s kinda multi-layered, so a character with a little bit of an emotional range, which is something that I needed for my career, really bad because I think people have a certain perception of me leaving wrestling that they just saw me as that guy, and I’m really not that guy at all.

He really isn’t.  As he spoke, he was so humble and grateful for this opportunity.  You could tell he was finding this whole situation pretty surreal.

What’s it like taking on the role of an iconic hero?  And were you a fan growing up?

I had no idea who they were before I got this role.  I had absolutely no idea, which they’ve been aware it’s gonna be a challenge right off the bat because it’s not one of your mainstream comics.  It’s just really starting to hit me how big it really is.  When we started doing press last week, we went over to Singapore.  When you fly across a world to go somewhere for a destination.  And when hundreds and hundreds of people show up, not only to talk to you, but to see you, and they’re already in support of this film which hasn’t come out.  They’re just so excited about it.  So it’s pretty overwhelming.

Did you have any heroes growing up?

(Laughing) So I always feel guilty when I’m asked this question because, yeah, I’m a Marvel guy and, you know…but Batman was my guy.  Like, I have the whole Dark Knight series and also when I was a very young kid, and for some reason, Aquaman was my favorite.  So I always feel bad answering, but those, that’s the honest answer.

How did this role compare with your expectations on what it would be like?

You know, it’s weird.  I don’t know if I really didn’t have any expectations, so it’s just kinda starting to hit me how big it actually is.  I knew that the role would change my career and change my life.  I’ve really pounding the pavement for years since I left wrestling.  It was hard for me to leave wrestling because that was my bread and butter.  I mean that’s how I made a career; how I made a living for ten years.  And it was scary leaving it behind, you know, kind of taking a chance on myself because I didn’t have offers coming out of wrestling.  I just left it to pursue acting.  I don’t think I knew what to expect.  I was just of hoping for the best.

Do you have a favorite on set memory?

Well, yeah, there’s a lot, but there was one day where, James (Gunn, Director), I think for his own amusement decided to make, the whole cast and crew dance.  It was weird because there was the huge outdoor scene and there must have been two hundred extras on set.  So there was the part where Star Lord was trying to distract Ronin, so he was doing a dance off.  Okay, so we were shooting that, and it was all those extras on set.  So when we were shooting it, Chris started doing his thing, and then he, he pointed to Ronin, and Ronin started dancing.  I wasn’t aware of what was going on.  I had no idea.  I was watching him and I thought, okay, you know, that’s Lee.  He’s messing around.  But then he pointed back to Chris, and then Chris pointed- and so everyone’s dancing, and I was like, what the hell?  And then I went, like, oh no.  So Chris points to me, and I was like, damn.  So I did some big goofy moves and then I pointed back to him, and then I could hear James laughing, and he starts saying, okay background- extras, start dancing, and literally, it turned into, like, three hundred people.  And it was like everybody just dancing, so it literally, it turned into this big rave.  It was hysterical.

So what’s next for you?

We’re gonna do a remake of Kickboxer.  So I’ll be an updated Tong Po.

So is it safe to say that you’re not coming back to the octagon?

Uh, no, you know, don’t rule that out.  I would love to fight again.  I definitely wanna go back and do some wrestling again. 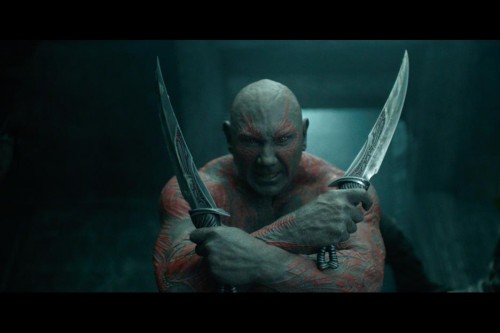 What do you hope audiences take away from your character?

I think when people see Drax, they automatically think that he’s gonna be kind of one-noted character who is the type of character that all he’s good for is fighting and chopping people’s heads off and stuff like that.  I wanted to bring more.  The way I approached the character was not looking at Drax as a warrior, but more as a father and a husband.  And I hope that people will see that that’s basically who he is and all his rage just comes from heartbreak, and not so much because he’s just hell bent on cutting people’s heads off, you know?  He’s really just heartbroken over the loss of his family.

Did you have a hard time keeping a straight face with your line?

Yes.  You know what?  It wasn’t so much my line, it was it was more like, Chris is so funny.  He’s just so funny, and it’s really hard keeping a straight face with that guy around.  I like stuff that’s off the cuff, and he’s just kinda improving it, and it’s so funny, man.  So yeah, there were a lot of laughs.  There was this one guy; I can’t remember his full name, but his name was Alexis, and he played a character called the, the Scarface prisoner.  He was the prisoner that I took the knife from.  We did some stuff and it didn’t make the film, but he did some stuff and added some few one-liners, and it was all improv stuff, that had us just dying.  I mean, literally, we were crying; we were laughing so hard.  But it’s times like that.

*I was invited by Disney and Marvel to be part of the Guardians of the Galaxy Event.  All images are courtesy of Marvel and Disney.  All opinions as always are my own.