I’ll be honest.  Until recently, I had only thought of ABC Family as the place my teens go to watch some of their favorite shows.  Pretty Little Liars, The Fosters and Switched at Birth are shows that I am very familiar with because having high school girls, these are the shows they HAVE to watch.  And then one day a preview of Chasing Life came on and my 16 year old said, “That looks so good.  I am going to watch.”  I thought, why would anyone want to watch a show about someone that has cancer?  I like to laugh, not be sad.  Then wouldn’t you know, I am invited on a press trip to LA that included meeting the cast from many ABC Family TV shows including Chasing Life.  With that, I had to catch up and boy, I had my question answered.

Chasing Life takes you on a journey with a 24 year old budding journalist, April Carver (Italia Ricci), as she gives a real life look at the ups and downs of having cancer.  Even with cancer being the center of the storyline, the writers have perfected the balance of the heavy and the light.  The show isn’t full of dark clouds, but instead, has a realistic yet uplifting, dare I say – funny life moments, that draw you in and make you truly care about the characters.  It didn’t take long for me to want to watch.  And since I am caught up, it’s killing me to wait for Tuesday night to come so I can see what April has to face head on this week as well as how it affects both her life at home and at work.  The strain her illness puts on her family and friends is story writing at its best.

I am starting my series of Chasing Life post’s with Italia, who plays the main character April.  What I love most about her character is that she doesn’t look at cancer as a death sentence.  She looks at cancer as a reason to embrace life.  When sitting down with Italia, I told her that I care so much about her character.  The way she has pulled the audience in, and giving us empathy for April, I wondered how that felt for her to have such an impacting role.

“Well, we want to make sure that we are doing justice for the people that are really going through this.  We want to tell their stories right.  There isn’t one way to tell a story for some person dealing with this.  Letting that go was sorta difficult.  I am just trying to follow my instincts and go by the information that people have given me.  That made it a little easier and I am just hoping those people can relate to at least one thing that April is going through.  Beyond that it got hard towards the end because I started getting letters from fans and people actually dealing with this.  It got really hard to go home at night and turn it off.  I felt so guilty.  Even now I feel so guilty that I am on hiatus from cancer.  I just want to do more for them.  I mean, I just get to tell a story for an hour a week and they do this for 24 hours a day.”

So did you do a lot of research and spend time with people battling cancer?

“Initially I wanted to know everything I could to learn about it before I started shooting.  But then I realized that April probably doesn’t know anything about cancer.  She doesn’t know more than your average person.  So I decided to learn with April as it was happening.”

What would you be doing if you weren’t acting?

“I’d be a lawyer!  I was actually going for entertainment law when all this happened.  I went with a friend who was with an extras agency to be at a party in a movie.  I was on summer holiday and they said , ‘ya want 100 bucks to be in a movie?’  And I was like, ‘Well, yeah.’  While we were at lunch the writer asked me to audition for a role and I got it then the wrote me into the next one and it kinda snowballed and made it easy to come out here to LA.  I was able to defer my acceptance for two years, my LSTAT for 4 years.  So I knew if I couldn’t make it happen in that time frame, I wouldn’t do it anymore and I’d go back.  So I’d be at the University of Toronto.”

Does your family watch in Canada?  Is ABC Family on there?

Yes, it’s called ABC Spark.  So yes, they are getting there.  They were on the subway and like the whole wall had my on it.  My mom called me so confused saying that she had so many people calling her and facebook messaging her.  She’s so overwhelmed.  (Laughing)  And then my grandmother is the best.  She will find the ads in the magazines open them up then put them across the whole aisle in the grocery store.  (Covering her face) she’s like, ‘Nan!’ and she says, “I’m 80 and I can do what I want!’   She’s amazing.  We got matching tattoos, my grandmother and I.  At 78!  And my mom too!  And my dad and two brothers!  It’s an African wisdom knot that means ‘ wisdom, ingenuity, intelligence and patience’, all things that I wish I had more of.”

She is so full of gratitude and one of the sweetest people I have met.  She made it clear that the show works because the writing is so good and the actors really do love each other, so it comes across on the screen, which makes it believable and just really good! 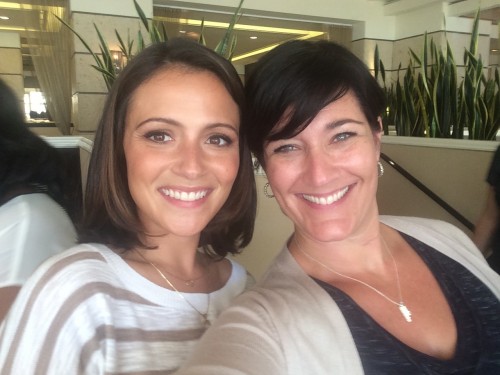 I also spent time speaking to Haley Ramm (Brenna), Mary Page Keller (Dr. Sara Carver) and Executive Producer’s Sean Smith, Joni Lefkowitz and Susanna Fogel.  I’ll be sharing more about my time with them in the weeks to come.  Make sure to tune in tonight!  And if you haven’t watched any episodes yet, you can catch up now on ABCFamily.com.  Here’s a look at what to expect on tonight’s episode.

April and her family prepare for her chemo and hospital stay in “What to Expect When You’re Expecting Chemo,” an all new episode of “Chasing Life” airing Tuesday, August 5th, at 9:00 p.m. ET/PT on ABC Family.

With only a few days left before April has to check herself into the hospital for aggressive chemotherapy, April is determined to live as normal a life as ever.  But as she has to deal with Leo drama, Beth falling apart, and trying to live under the hovering eye of Sarah, April quickly learns that nothing will ever be “normal” for her.

Meanwhile, Brenna tries to juggle time with Kieran and Greer.

If you aren’t watching Chasing Life – it’s time!  Check it out!  I promise that you will be happy you did.

*I was invited by ABCFamily on a press trip to interview the cast of Chasing Life.  All photos not credited are my own.  All opinions as always are mine.  Some editing has been done to the interviews to make it easier to read.