The Disney Channel is known for the silly humor that a younger audience loves.  One thing that they haven’t really tried much of is making a movie that is appealing to entire families to watch together.  So when Disney Channel hired Leigh Allyn Baker as an Executive Producer for Bad Hair Day, they may have found that secret ingredient to obtain that whole family appeal they are looking for. 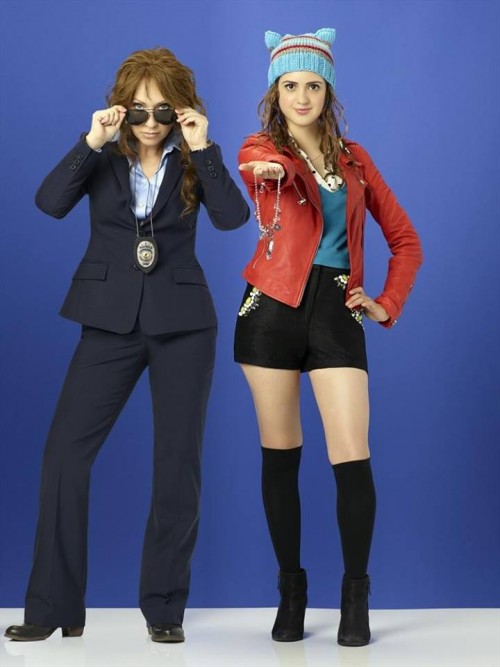 Great chemistry between Leigh Allyn and Laura Marano are what make this movie work.  As Leigh Allyn mentioned in our interview, “It was the first time we worked together but we hit it off so well.  We had such good chemistry.  You could see in the bloopers when she’s riding with me in front of the bicycle and me laughing maniacally.”  The two of them are really funny, and for Leigh Allyn, she wanted to make a movie that showed a smart girl that doesn’t fall victim to the guy and also something that the whole family could enjoy together.  Something different for the Disney Channel.  “Just to have a film for Disney Channel that adults can watch with their kids that has a unique different message.  Like let’s go out on a limb and do something really different for the channel and see what the response is and Disney Channel was brave enough to do that because this is very different for them.”

Marano stars as a high school tech whiz who’s bound and determined to be crowned prom queen.  But on the big day, everything that can go wrong does go wrong, starting with her sudden and epically uncontrollable hair and her once lovely yet now destroyed prom dress.  She soon comes to rely on a down-on-her-luck cop (Baker) who’s in pursuit of a missing necklace that the teen unwittingly has in her possession.  Prom day goes from bad to mad as the pair is pursued by a dogged jewel thief on a wild ride across the city.  Christian Campbell has been cast as the jewel thief.

*I was invited by Disney to be part of a press trip for McFarland, USA and part of this trip included a visit to the Disney Channel to screen Bad Hair Day and interview Leigh Allyn Baker.  All opinions are my own.