Wow, I am waking up still feeling very JOYful after the purple carpet premiere of Disney Pixar’s Inside Out. I will be sharing all about my experience at the event in the upcoming weeks, but I wanted to give you a look at some of the photos taken last night. 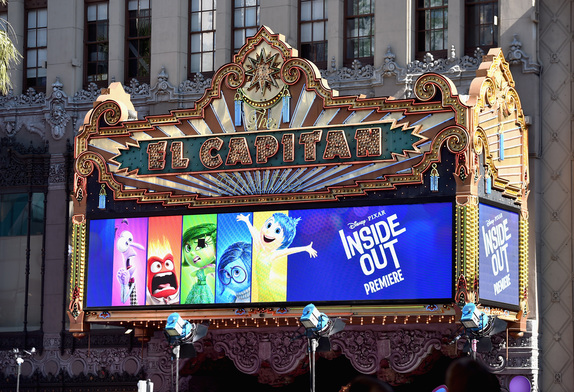 It was hot, over 100 degrees outside, but it didn’t stop the celebrities to show up with their kids to enjoy the pre-party, and quite the party it was!

Disney/Pixar’s Inside Out Premiere Photos

Do you ever look at someone and wonder what is going on inside their head? Disney•Pixar’s original new film “Inside Out” ventures inside the mind to find out.

When Riley’s family relocates to a scary new city, the Emotions are on the job, eager to help guide her through the difficult transition. But when Joy and Sadness are inadvertently swept into the far reaches of Riley’s mind—taking some of her core memories with them—Fear, Anger and Disgust are left reluctantly in charge. Joy and Sadness must venture through unfamiliar places—Long Term Memory, Imagination Land, Abstract Thought and Dream Productions—in a desperate effort to get back to Headquarters, and Riley.

All photos are from Los Angeles Premiere and Party for Disney/Pixar’s INSIDE OUT at El Capitan Theatre on June 8, 2015 in Hollywood, California. (Photo by Alberto E. Rodriguez/Getty Images for Disney).

*I was invited by Disney/Pixar to attend the press junket including the premiere of Inside Out.  All opinions are my own.