If you caught my last Ducktales post from that time I plunged into the Scrooge McDuck’s money pit, I mentioned that there is a new DuckTales 2017 coming our way. While at D23 we had the chance to talk to the creators there would be an interview to come with Co-Producer / Story Editor Francisco Angones and Executive Producer Matt Youngberg. The two of them shared a few fun facts just in time to get your ready for the one-hour television movie premiere happening this weekend! 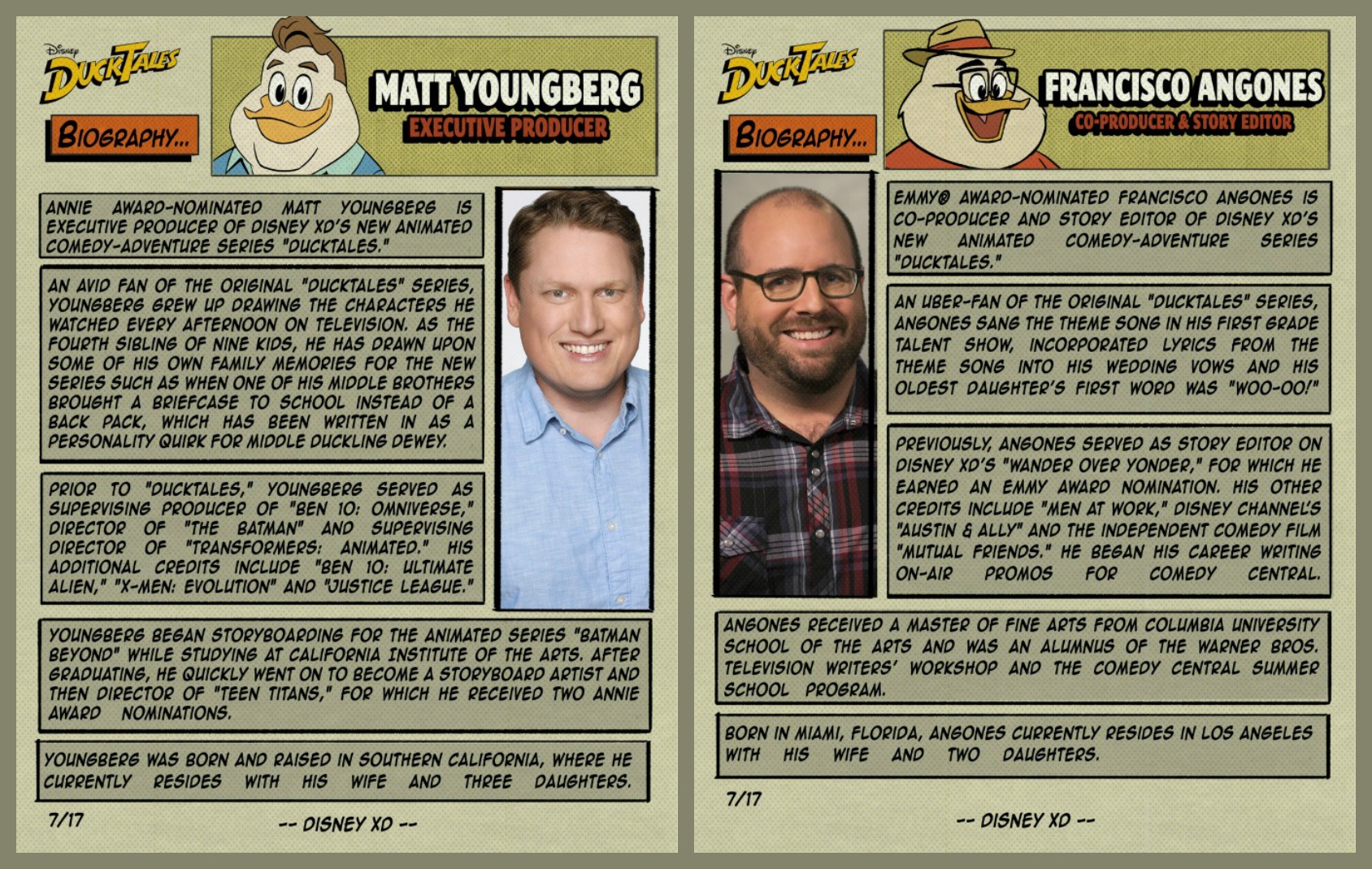 Co-Producer / Story Editor Francisco Angones and Executive Producer Matt Youngberg talk about bringing back the good of the old with the fresh of the new in the new DuckTales series.

Matt: We hope you liked it. It’s a real labor of love for us. As Frank likes to say, we’re terrified of screwing it up. We love DuckTales so much that the only thing we want is to present a DuckTales to a new audience that gives the audience the same feeling that we had. And hopefully that in 30 years, they’ll be coming around and creating the next version of DuckTales, and loving it as much as we love the original.

Francisco: The dedication of this crew to presenting something that lives up to the DuckTales name is astounding. I’m very proud to be a part of it.

Can you share about the casting of David Tennant?

Matt: David Tennant seemed to be the natural choice for this. We really wanted to find somebody who was legitimately Scottish. We thought that was really important in this iteration. Someone who had the character to bring this icon alive. And David is an amazing actor. He’s morphed into this role in an incredible way because when you think David Tennant, you think young and vibrant and all of these things. And, well Scrooge you think of as old and miserly. But as you can see in our version, he is miserly and old, but he has a youthful energy to him. Adventuring has kept him young. I think David has really balanced the feeling of an old character who has a ton of life left in him.

Francisco: Yeah, you can say he’s the Willy Wonka of adventure. We know that DuckTales is a globetrotting adventure show. It’s part of the reason why in our pilot premiere, we do half of the episode in Duckburg, and the other half going all around the world. One of the things that we wanted to try to set up every time we go to a different location is we always want to try to be authentic. So, we would genuinely try to find voice actors- if we go to Egypt, we try to find Egyptian voice actors. If we go to China, we try to find Chinese voice actors to bring that extra level of interesting diversity and authenticity and present a world that kids actually see around them every day.

Technolgy has changed, so you had to make some changes to the world as it has evolved. Has Donald Duck a cell phone?

Matt: I think our approach to that was to just present a world that kids understand and know, but without beating you over the head with it. Like, we didn’t want the characteristic of Louie to be, “I have an iPad.” That’s not his character trait. 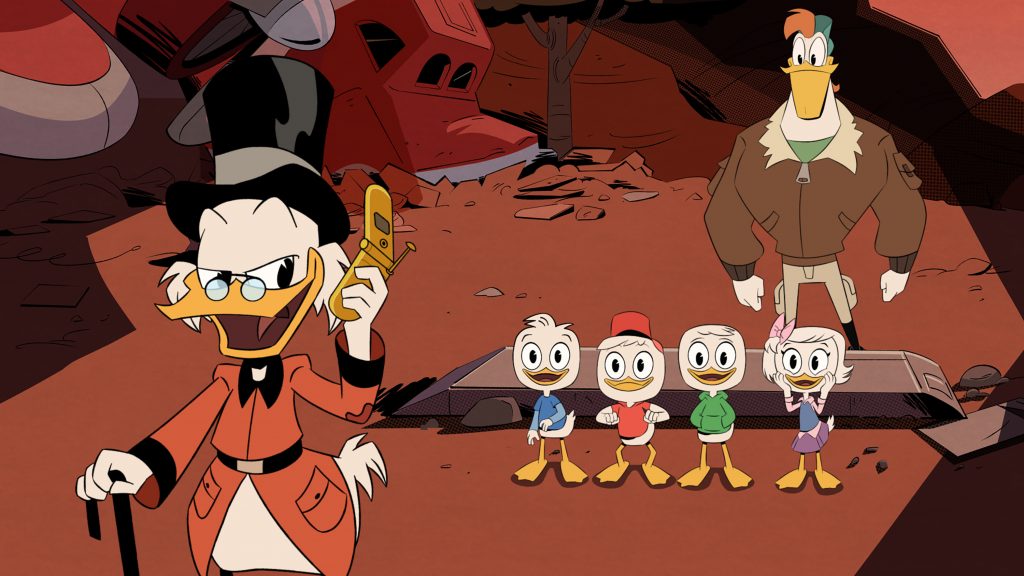 Francisco: But if Louie is trying to break into a room, he’s gonna do the same thing that every kid would do- pull out a YouTube video and look up how to do it. We wanted to be conscious of it without really paying too much attention to it. They’re not gonna get stuck in virtual reality. They’re not gonna get all those kinds of things.

Matt: We even rely on the characteristics of the characters to kinda tell us how they would live in this world. For example, if you watch, Donald has an iPhone type phone- and then Scrooge has a full gold flip phone because he hasn’t upgraded in 20 years.

The animation is so different. It has a comic book from a newspaper look, super cool!

Matt: That was something that we decided early on as we started developing the show. We wanted to make sure it still had a hand drawn feel to it, we wanted to make sure it felt hand crafted. We didn’t want to go the CG route, and there were a few reasons for that. One was the original series. When it was brought onto the air it was just a bunch of Disney animators making a TV show- Disney feature animators- making the best TV show that they could. And it was an amazingly animated show. It had the hand-crafted feel that we wanted to retain. But also, as we got into developing the show, we looked at the source material beyond just DuckTales.

We looked at the comic books that inspired DuckTales that were made by Carl Barks and other artists. And we wanted to be able to harken back to the roots a little bit more. So we developed this style, not only in having it be traditionally animated by hand but also in creating a style for the world that looked like it was inked by an artist’s brush. So that like it looks like comic book pages come to life a little bit. It was really important for us to kind of pay homage to where it came from and make it.

That also, to me, helps kind of ground it a little bit and make it feel more tangible and real. I think if it was CG, it would feel a little bit more artificial and hard to connect with. You’ve got this world of crazy weird ducks- like if you think about it, DuckTales doesn’t make any sense. It’s about ducks that go on adventures. But presenting it like a comic strip, that you automatically buy into.

Francisco: And one of the things we said is that DuckTales and Carl Barks, they’re all pulp adventure stories. And one of the cool things that Matt and our art director Sean Jimenez did, is they wanted to actually put pulp in it. So, if you pause and look very closely, everything has this layer of actual newspaper pulp underneath it to make it feel like you are watching a 1930’s adventure serial. It’s really cool.

Matt: Nowadays, even when you’re doing it hand drawn, you’re doing it on a computer. So we wanted to find a way to bridge that digital divide a little bit to make it feel like it was warmer and more inviting than something that was really flat and graphic and digital. So we put in that layer of pulp. And the lines on the characters are a little bit more sketchy. Those kinds of things all help it feel that way.

What things can fans of the original series expect to see keeping it true to the original?

Matt: Well, it was important for us to capture the feeling of the original series, and we hope that will bring people back. And one of the big things was, of course, the theme song, as you saw. The theme song is kind of the litmus for our approach to the whole series. The theme song was something we knew we couldn’t fundamentally change. It had to be something that felt close enough to the original that you knew we weren’t just getting rid of things that we loved, but it would had to have enough of an update that you can tell we were still trying to do something, we weren’t just recreating the old series. We’re doing something different.

There’s a lot of things you’ll see, even in the first episode, when they go into the wing of secrets. A lot of little Easter Eggs to the original series. There’s a lamp in there, and a couple of skeletons that are recognizable to fans of the old series. There’s a lot of things. So we weave in these things, and then throughout the whole series, we weave in more from the original series. We weave in more from the comic books, from the video game. We’re bringing in all of these influences that people have loved for 30 years, and still integrating them into the show, but we’re trying to make sure we find a fresh take on it, or something feels like the original but is created through the lens of modern storytelling.

Francisco: We have to appeal to kids who have never heard of it, whose families didn’t grow up with it. We really wanted this to be an all-ages experience, but we’ve gotta start with the kids. That’s why we set up at the beginning of this episode, the kids kinda know who Scrooge is, but they don’t know that he’s related to them. And they don’t know about the specifics of his adventures. Webby kinda serves as the DuckTales fanboy who comes as like, “You don’t know about Scrooge McDuck?” And there’s a lot of that going on. But it was great to have that take on the boys, because then it allows new kids coming into the show to get sucked into that, and learn about that crazy huge history that the property has, that our version of Scrooge also has. It allows us to introduce it in a new way while still hopefully appealing to older audiences.

Are there any other Disney Easter eggs or inside jokes that we’ll see?

Matt: You’ll see a lot of things, we really want to bring in a lot of the things we loved as kids from Disney. Ludwig Von Drake makes an appearance on our show. There’s a lot of other things. I don’t wanna give it all away yet, because I think you’ll be excited to see some of them. If you’re a big fan of the old series and the old Disney afternoon, I think you’ll be a big fan of what we’re doing on the show. 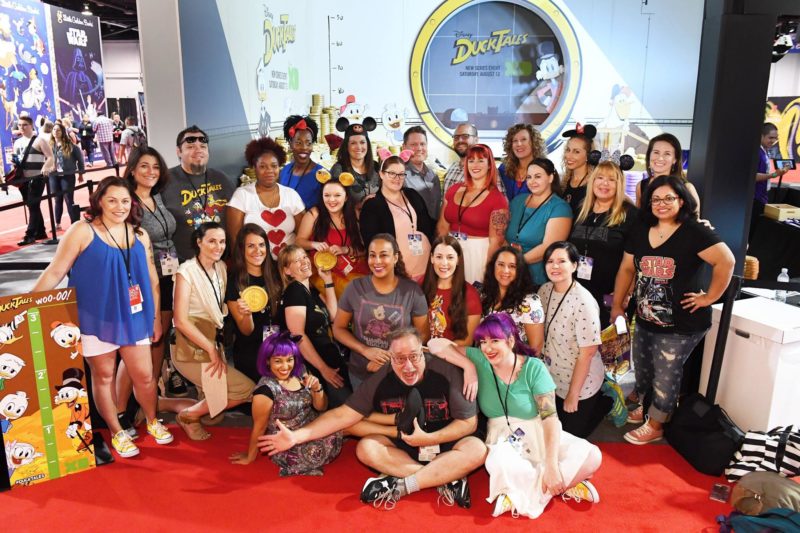 I was invited by Disney to attend the D23 Expo to share my experience with my readers. All opinions are my own.