Sometimes I have to cover a show that I haven’t watched prior to doing an event with ABC. It doesn’t happen often, as I try to keep up, but let’s face it, if it weren’t for the DVR and online streaming, I would be pretty much lost in the world of TV. Galavant is one of the shows that prior to this particular press trip, I just hadn’t taken the time to watch. Well, let me tell you, I had missed out. With some of the funniest lines and original songs, I became instantly hooked. If you are like me, and didn’t take the time to check out Gallavant, here’s a look at what you’ve missed with the new season 2 opening song.

See, hilarious! And this is just a glimpse at the humor. The vibe of Galavant is more of a Princess Bride, Monty Python type of feel, funny, but the bonus is in the music. I was fortunate enough to sit down with actor Tim Omundson (“King Richard”), and executive producers Dan Fogelman and Kat Likkel when they shared the craziness of just wrapping up filming a season in Morocco. “I think it’s the biggest thing that’s ever been done in a half hour comedy. We used 3 armies with hundreds and hundreds of extras helping pulling the story all together as the scene goes on, they’re all gathering armies and it’s really kind of “Game of Throne” stuff that everybody’s breaking into these great musical numbers. It’s completely insane”, shares Fogelman. 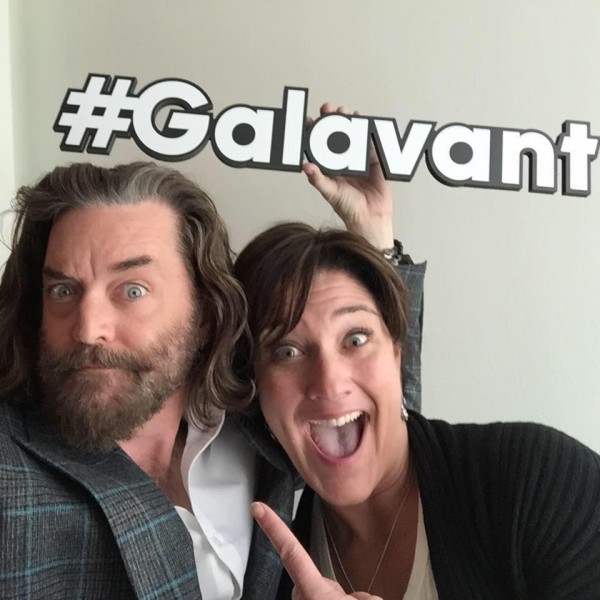 Before meeting Timothy Omundson, I was warned that he is extremely nice, personable, and I will simply adore him by the time the interview was done. Ok, all of that is true, but the same goes for Dan Folgelman and Kat Likkel, just really great people that love what they do.

Let’s talk about the cheeky humor – from watching what is in store for season 2, it’s been kicked up a notch for sure, and for people like me that love this sense of humor, it’s awesome!

“Yeah, we want to push the envelope and continue to push it. It’s kind of getting bigger. I think we’re getting sharper comedically and we do massive screenings with families and we’re trying to do stuff that’s kind of going over the heads (of the kids), like the adults are getting it but we actually just did a whole episode about a Gay Bar without ever saying “Gay” not that it’s a bad word or a good word but you know, as we were watching the kids, we were just kind of enjoying it and getting it in a different way and it’s been an interesting thing for us to try and find.”  – Dan Folgerman

The return of last season’s breakout comedy extravaganza “Galavant” reunites screenwriter/executive producer Dan Fogelman with the award-winning musical team of composer Alan Menken and lyricist Glenn Slater. Having discovered the dark side of Madalena, our dashing hero’s adventures continue as he embarks on an unlikely bromance with King Richard and fights to rekindle the romance with his true love, Isabella.

Where did all the music for Galavant come from? Alan Menken of course. The composer of Beauty and the Beast, The Little Mermaid, Aladdin, the creator of the “soundtrack-of-your-childhood”  shows off his genius.

“Alan Menken’s done I think 32 original songs for 10, which is really the equivalent of like 5 Broadway Musicals. He’s written 32 songs and we play them in every genre. I mean, we did. I wrote the movie “Tangled” and Alan did all the Music for that and like you know, to do a Movie that had 6 songs in it, 7 songs in it, took us a year and a half in development, developing for decades. And I mean, they’re just pumping them out and each one is like, sometimes when our friends come over, I drive my wife crazy. Do you want to show somebody something when you’re proud of it, like I can never pick one song, like I wish I had all the songs here right now, I’d be showing you like, there’s “West Side Story” there’s stuff like, treading “Grease” and treading every Musical genre. And it’s really kind of outrageously ambitious stuff so. And by the end, we do have all of the 300 Moroccan extras singing an Alan Menken song on the March as everyone is going to War.” – Dan Fogleman

“Great show and then the actor are cast. He’s (Alan Menken) writing them for us, like he knows, he’s written songs for me, he’s writing for Mal and Danny and everybody. That’s just an incredible mind twist to get this man, one of the greatest composers of the last 100 years, is actually writing songs with me in mind and my voice in mind.” – Tim Osmundson

Talking about the music and the cast and the production, “I’m so proud of it,” Likken smiles, “I hope everybody watches it this year, I think it’s really special so…”

Timothy adds, “I’m incredibly proud. Of the rest of this cast also because, you guys, the character development, it’s just, it’s so much fuller this year. Everyone really gets some beautiful opportunities to do some amazing work, and everybody steps up. To get to watch these scenes with Mal and Vinnie and Luke, I hadn’t seen any of that, and Karen. She has, everyone blew me away. And it’s so nice to see these people you work with, your colleagues, and really care to do tremendous work. It’s been incredibly satisfying to me.

Who can we expect to cameo this season?

We have Weird Al, Hugh Bonneville and Stamos back. I‘m doing a different Show with Stamos right now, and from that, we just shot it here in Los Angeles on the Green Screen, we had to do like a cut away of Stamos to make it all work because we couldn’t get him out to England. And then we have all these great English Actors coming out. It’s kind of like a who’s who? Like they’re not all names you know but people that have kind of starred in every West End Production in London. It’s kind of like the creme de la creme of like our people that are getting nominated for all the Oscars and stuff this time of year here, it’s like that there group of people. So you’ll recognize a lot of faces and people. – Timothy Omundson

Ok, so I have to share, for you may not have known, but Timothy Omundson’s accent ISN’T REAL!!!

Our Musical Director (Christopher Lennertz) who directs all the music, Tim went and took his family to see, Aladdin, and the director came up to me, and this was after a year of working with Tim, and he goes,“did you know Tim’s not British”? Like he’d been working on the show for a year and he had no idea. – Kat Likkel 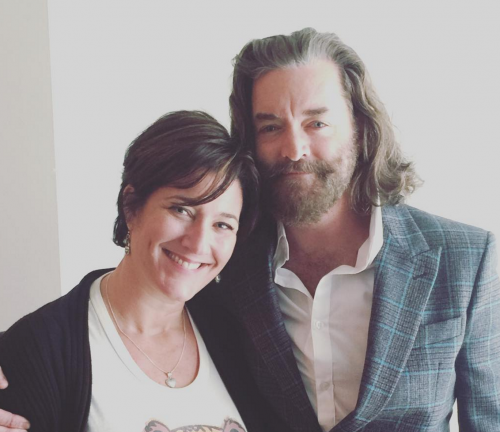 Well I have to say all of my actor buddies know like this one’s for them because we never, ever get cast with Brits. A friend of mine, who was on Band of Brothers with Damien Lewis, and I happen to have drinks with him in London and he said “Oh, I’m gonna call Damien, we’re great friends.” Damien’s the Poster Child for Brits taking over and so he comes down, everybody’s like “Hey Damien. You’re not the only one who does accents anymore. Tim is an American who played a British King“. – Timothy Omundson

So what to expect? Kat puts it perfectly;

This season we decided to take all of the characters and throw the biggest obstacle we could. It’s like we took all of them and we turned their lives completely upside down from where they ended up at the end of last season. Galavant is about love and redemption. If that doesn’t excite you, I don’t know what will.”

*I was invited by ABC to take part in a press event that gave me this opportunity to share my interview and opinions with my readers. As always, all opinions are my own.