Have you watched the new Kia Commercial with Christopher Walken? It’s not only brilliant, but it’s hilarious!

I was asked by Kia if I could take part and #AddPizzazz to my day leading up to the Big Game this Sunday. Since I work with them already, it was an easy yes. Then I got the package in the mail. 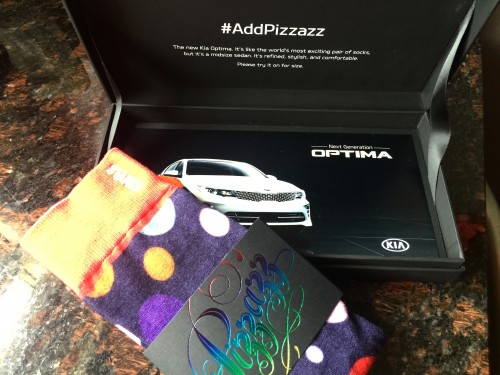 Oh, yeah, this is going to be fun! So I already started posting on my social media channels on how I know how to #AddPizzazz to my day.

And I even made a fun video!

I received some Stance socks to have some fun promoting Kia Motors America hilarious "Big Game" commercial. There will be lots of fun photos and videos to come! #AddPizzazz #KiaOptima

Posted by Trippin With Tara on Thursday, February 4, 2016

I will be sharing how I #AddPizzazz with my Stance socks over the next week. So follow along! I promise to keep it entertaining!

Kia will #AddPizzazz with their Big Game Commercial

The commercial is set to air in the fourth quarter of the big game – “Walken Closet” is the centerpiece of Kia’s multiplatform campaign spotlighting the all-new 2016 Optima as the vibrant alternative for those searching for more in a vehicle segment whose hallmarks are basic, boring and uninspired. As Walken explains in the spot, “There are two kinds of people in this world. Those who are content to blend in … then there are those who expect more. They’re exciting. They have pizzazz.”

“No one is cooler or as instantly recognizable as Christopher Walken, and on advertising’s biggest stage Kia is out to show the world the all-new Optima delivers a level of refinement and sophistication unlike anything else in the midsize segment,” said Michael Sprague, chief operating officer and EVP, KMA.

So watch as I #AddPizzazz over the next week leading up to the commercial airing on Sunday and then as I head to Chicago for the Chicago Auto Show next week I will be sure to keep the pizzazz going.

*I was given a pair of Stance socks to use for the #AddPizzazz campaign. As you can tell by all the fun I am having, as always all opinions are my own.