The original Mary Poppins is part of my childhood. It’s one of those movies I watched until my VHS tape needed to be replaced. So naturally, I couldn’t pass up the opportunity to take part when Disney asked me to do the Mary Poppins Returns Event. I loved the movie and if you’re wondering if you will too, here are my top reasons to see Mary Poppins Returns this holiday season.

It’s NOT a remake.

Everyone that has asked me about Mary Poppins Returns thought it was a remake of the original with Julie Andrews and Dick Van Dyke. Mary Poppins is actually a collection of stories by P. L.Travers.

So, if you will, this is not by any means a remake. It’s another story in the adventures of Mary Poppins. However, the Banks children do return, but they are grown and Michael Banks has children of his own. The story is familiar, but again, it’s not a remake.

Let’s talk about Mary Poppins herself. From beauty to talent, I honestly can’t think of anyone they could have cast for such a role other than Emily Blunt. She resembles Julie Andrews, yet she has made the role totally her own and truly knocks it out of the park. She’s funny, she’s talented and most of all, she’s the new generations Mary Poppins.

“Well, I think she’s much closer to how she is in the book.  That’s how I played her.  And in the book, she’s incredibly rude and vain and funny and enigmatic and weird.” – Emily Blunt

The role of Burt, originally played by Dick Van Dyke isn’t in the new film. Instead, we meet Jack, a lamplighter with the same child-like disposition and the perfect sidekick to Mary Poppins. Needless to say, Lin-Manuel Miranda‘s singing and dancing is so right on, his theater days have paid off, yet it’s much different.

“It felt like the fruit of the harvest. The harvest I began when I was eighteen years old.” Yet, it was hard work. “I’ve never danced like that in my life. None of my shows, there’s incredible dancing with Hamilton. Hamilton doesn’t do it. You know what I’m talking about. And so I was very proud of that because it was a lot of hard work to get there.”

Known for his works on Chicago and Into the Woods, Rob Marshall is a musical director genius. His vision is choreographed perfectly on the screen, keeping it fresh and new, yet there’s that nod of respect to the original. From casting both Emily and Lin-Manuel to the familiar look of the animation in the original film, Rob made sure that if you get up to go to the bathroom, you will miss something. 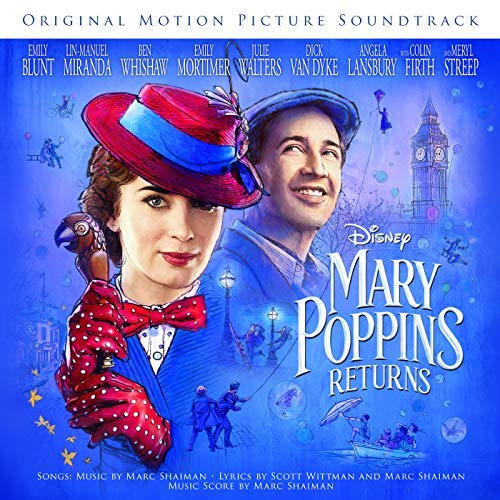 It was important to composers Marc Shaiman & Scott Wittman keep the feel and flow of Mary Poppins, but to make it familiar without using the same songs. That isn’t an easy task, yet they did it. Perfectly. If you want to give the music a listen, it already available. Warning, it’s fantastic.

As mentioned above, the role of Burt played by Dick Van Dyke doesn’t make an appearance in Mary Poppins Returns, but you will see him in the other role that was in the original. He returns as banker Mr. Dawes, Jr., he played the Sr made up as an elderly man in the original.

You can’t help but to smile and love seeing him on the screen. And guys, he’s 92. Amazing.

Rob Marshall shared of his dancing scene, ” I said to Lin and Emily, “If he falls off that desk you’re dead.”

So from the cast to the music, the dancing, the visual, Mary Poppins Returns is one that will win awards and be loved for years to come. Just like the original.

I was invited by Disney to attend the #MaryPoppinsReturnsEvent. All opinions are my own.