Earlier this year I attended the press junket for Million Dollar Arm.  Attending a movie premiere and interviewing the actors always makes a great movie become personal to me.  I feel that if it touches me, I have to tell everyone to go see it.  Now with the DVD/Blu-Ray release of this inspiring film, I have to shout out – GO GET THIS MOVIE! 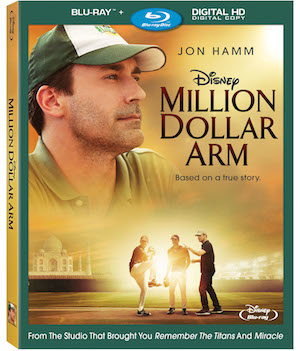 I did a review of 5 reasons I loved the film, but with the DVD there’s more, the awesome bonus features.

Based on a true story, sports agent JB Bernstein (Jon Hamm) finds that business has changed and things aren’t going well for his career. In a last ditch effort to save his livelihood he concocts a scheme to find baseball’s next great pitching ace. Hoping to find a young cricket pitcher he can turn into a major league baseball star, JB travels to India to produce a reality show competition called “The Million Dollar Arm.” With the help of cantankerous but eagle-eyed retired baseball scout Ray Poitevint (Alan Arkin), he discovers Dinesh (Madhur Mittal) and Rinku (Suraj Sharma), two young men who have no idea about playing baseball, yet have a knack for throwing a fastball. Hoping to sign them to major league contracts and make a quick buck, JB brings the boys home to America to train. While the Americans are definitely out of their element in India — the boys, who have never left their rural villages — are equally challenged when they come to the States. As the boys learn the finer points of baseball — JB, with the help of his charming friend Brenda (Lake Bell) — learns valuable life lessons about teamwork, commitment and what it means to be a family.

The Blu-Ray and DVD include the making-of featurette “Training Camp,” showing actors Suraj Sharma and Madhur Mittal learning how to pitch a baseball.  There is also “Their Story”, where JB Bernstein talks to the real Rinku and Dinish.  A bit of their conversation goes like this –

Rinku:  We were little guys trying to make enough money to support my family.  Take care of myself as well.
JB:  When you guys first met me, what did you think?
Rinku:  I thought you were crazy!  Crazy man!  Who was going to give me a million dollars to play baseball.  I thought he came here (to India) to play some jokes or something.  And then when I won Million Dollar Arm I realized, this is reality.  And then I was glad I met you.

Denish:  I think the Million Dollar Arm contest can change the lives to show if you work hard you can do anything,

Rinku:  I think this is something that opens a lot of kids eyes.  If I can do it, they can do it too.

JB:  To share this story in a movie is something I am most proud of, other than my family.

The Blu-Ray also has these special features:

IS AVAILABLE ON DVD AND BLU-RAY NOW!