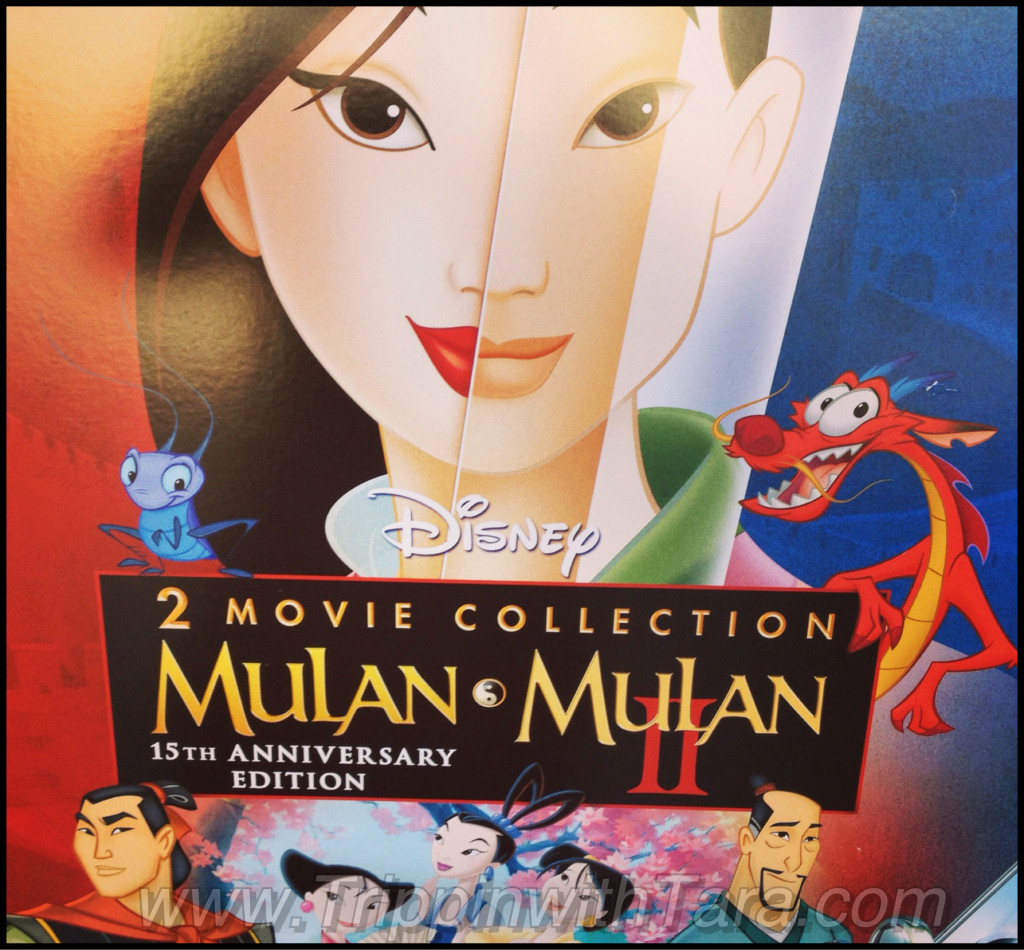 During my whirlwind of a trip to LA for the #DisneyOzEvent last month, one of our stops was at the Hyperion Bungalow located at the Disney Animations Studios.  Here we enjoyed a delicious (and suiting) Chinese lunch and then were graced with the presence of Tony and Tom Bancroft,  adoringly known as the Bancroft Brothers.  Twins.  Former Disney Animators that took the time to  share a little bit about their background as well as looking into the creations of such classics as Beauty and the Beast, Aladdin, The Lion King, The Hunchback of Notre Dame, and The Emperor’s New Groove.  Of course with the release of Mulan/Mulan II – Combo Pack Blu-ray 15th Anniversary Edition, we got to hear some great inside secrets of the film as they drew some of their beloved characters while they spoke. 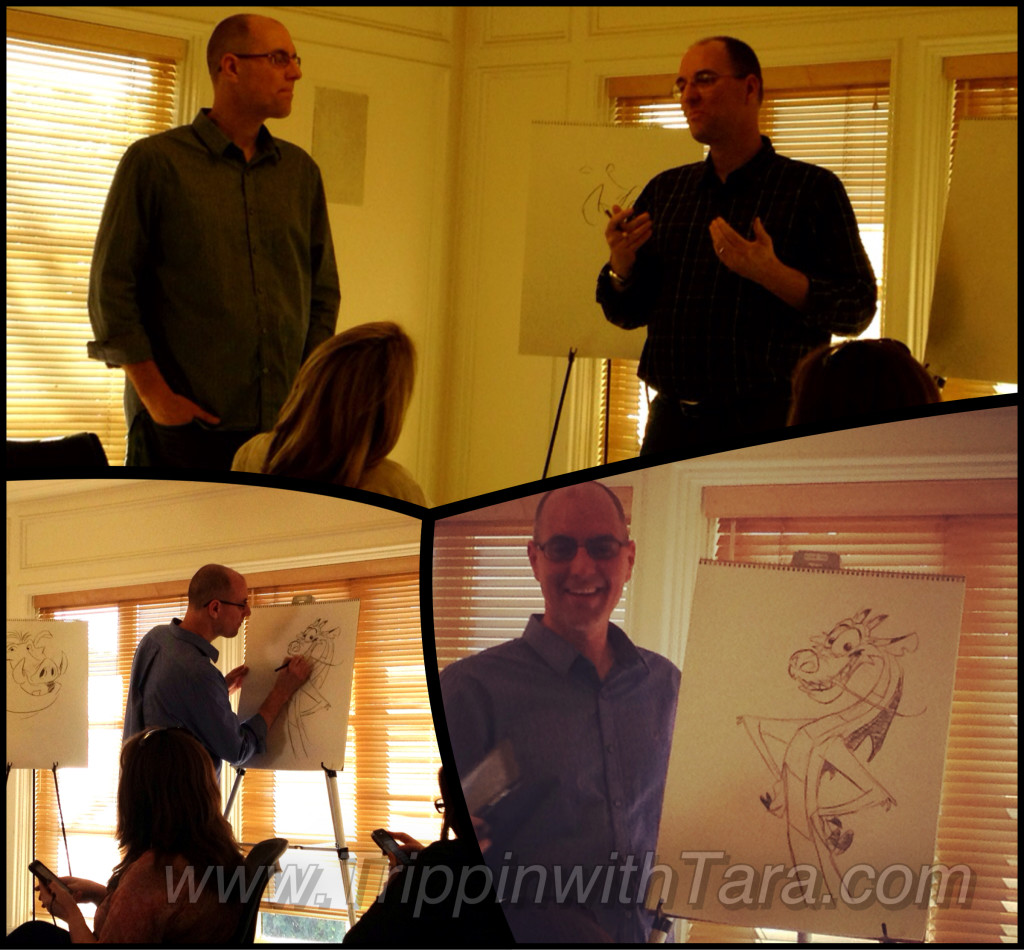 Tom is the supervising animator of the fun loving character “Mushu”, and Tony is the director of the Mulan.  They were both so fun and entertaining to interview!

Their love for art started at an early age.  They went to school to learn to do animations and both got hired to work as animators at Disney in Florida where they worked on Lion King.  After years of working on other films separately, the Bancroft brothers reunited to work together once again for the making of Mulan.  They shared the amount of time and the details that went into creating the Mulan characters.  Especially Mulan.  Between the two of them they have seven daughters, so coming up with a strong character and not another damsel in distress, was extremely important to them.

As for Mushu – he wasn’t going to draw some simple dragon. Tom did research on dragons for hundreds of hours.  It was news to me that Chinese dragons don’t look like the typical scaly reptile like creature I would think, but they are rather long and slim and have whiskers.  That is why Mushu looks like he does.

A fun fact –  Tom always wanted Mushu to be purple. While Mushu ended up red, there is a scene where Mushu is on the back of the horse after falling off the cliff. In this scene you can see Mushu has purple on his tail. That scene was placed there just for Tom as a surprise because he’d shown so much passion for the character including the color he felt he should be.  Interesting isn’t it? 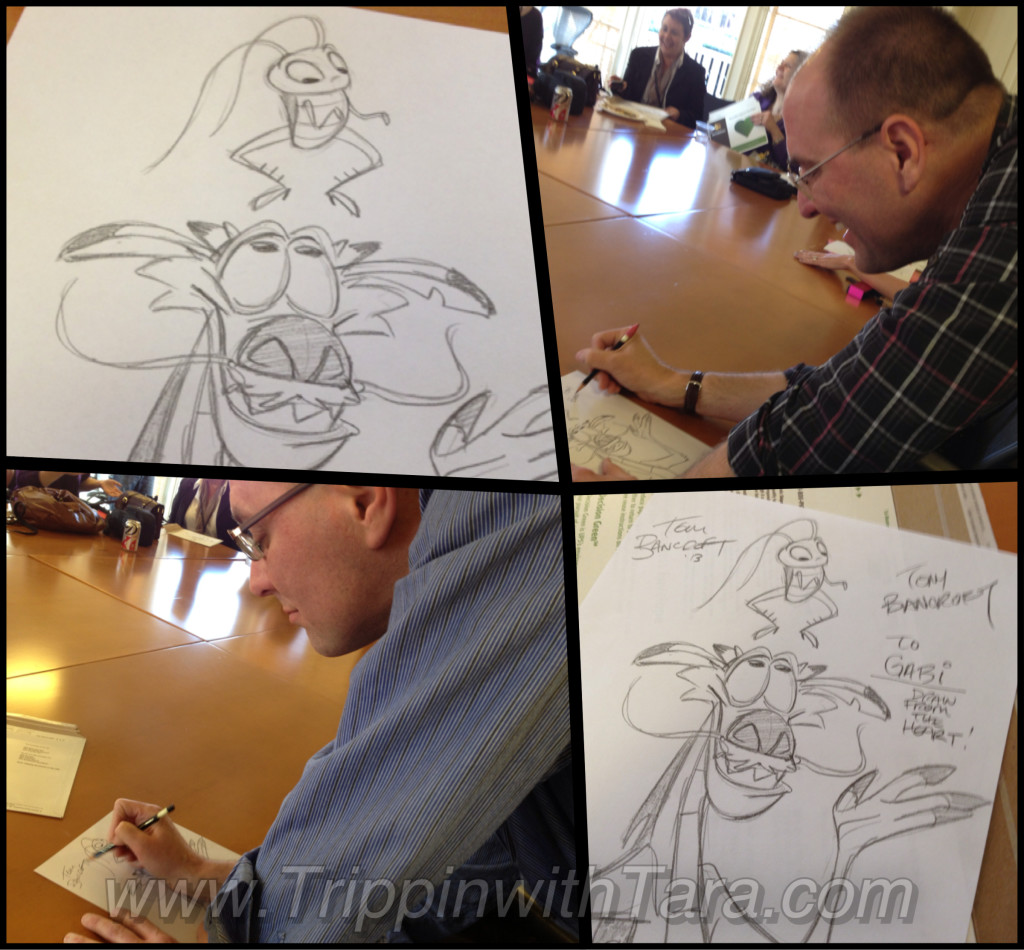 The highlight of this part of the day was that the brothers took the time to draw up 25 original drawings of Mushu and the lucky cricket to take home.  Having a daughter that dreams of being an animator herself, this was just so awesome!  The Bancroft Brothers were even kind enough to sign the sketch and make it out to Gabi – she was thrilled and cherishes this so very much.
I mentioned earlier that the Mulan/Mulan II – Combo Pack Blu-ray 15th Anniversary Edition is now available!  Make sure to add it to your collection today!