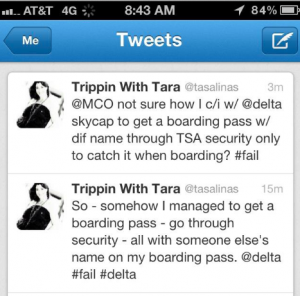 In this day and age, one thing we know about traveling via airplane – get to the airport early because airport security can be brutal, right?

Well, sure, I know firsthand and can appreciate the TSA keeping us safe. It’s important, and even if it makes for an extra hour at the airport when traveling, it’s worth the peace of mind.

What happened to me today I felt was blog worthy, for it makes me question how secure security really is at the airport.

I arrived an hour and half before my flight and decided to do curbside check-in with the Delta Skycap. First, the Skycap asked where I was flying to and I answered LA. He questioned it being a non-stop flight and asked about where I was connecting. I gave him my record locator and then my flight number and ID. He had a hard time finding me in the computer and when he did he couldn’t print my boarding pass or luggage tags for the machine wasn’t working. He asked me to wait a moment and he walked over to what appeared to be a Delta ticketing agent stationed right next to the skycap booth. She handed him what he needed, he then gave me my boarding pass with my luggage sticker attached to the back and I headed to security.

I was relieved to see it wasn’t going to be a long wait. I stood in line for maybe 10 minutes. I got to the TSA agent who took my ID and boarding pass and made small talk about the pronunciation of my name, mentioned seeing me again and then initialed my boarding pass and sent me on my way.

When it was time for me to board, I waited until my zone was called and got in queue and waited for my turn to board the plane. The flight was over sold so getting on the plane and getting a spot for my carry-on was on my mind. I handed my boarding pass to the gate agent and it beeps stating that I am already on board. Um, what?

Now, I take responsibility for not looking at the boarding pass when it was handed to me. It never crossed my mind to check. But the fact I got through security, as a male, with not anything in our names in common – how does this happen?

You see grandmas getting patted down on the news often, and disgruntled travelers being profiled and detained for questioning, but I get through with a boarding pass of a male passenger only to get caught because he boarded before me. This has made me re-think airport security. I suddenly don’t feel as safe as I did before. If I can get through as a male, who’s to say anyone else can’t do the same? Fake ID’s are one thing, but to get through with an ID and boarding pass that don’t match? Yikes!

Tell me, what is wrong with this picture?

I heard back from Delta via Twitter.  I plan on emailing the TSA a link to this blog post.  I will share their response if I hear back from them.

I’d love to hear your thoughts!  Leave me a comment!  Safe travels!