Paul Bettany, first known as the voice of Jarvis in the Iron Man films and the first Avenger film. Then Avengers: Age of Ultron happened, and now he’s Vision, a powerful, synthetic being, programmed by Tony Stark and Bruce Banner using J.A.R.V.I.S. based codes. That’s a bit heavier than the personality of Paul, for even when he walked into the room, the room lit up, and he was ready to have some fun chatting with the moms. 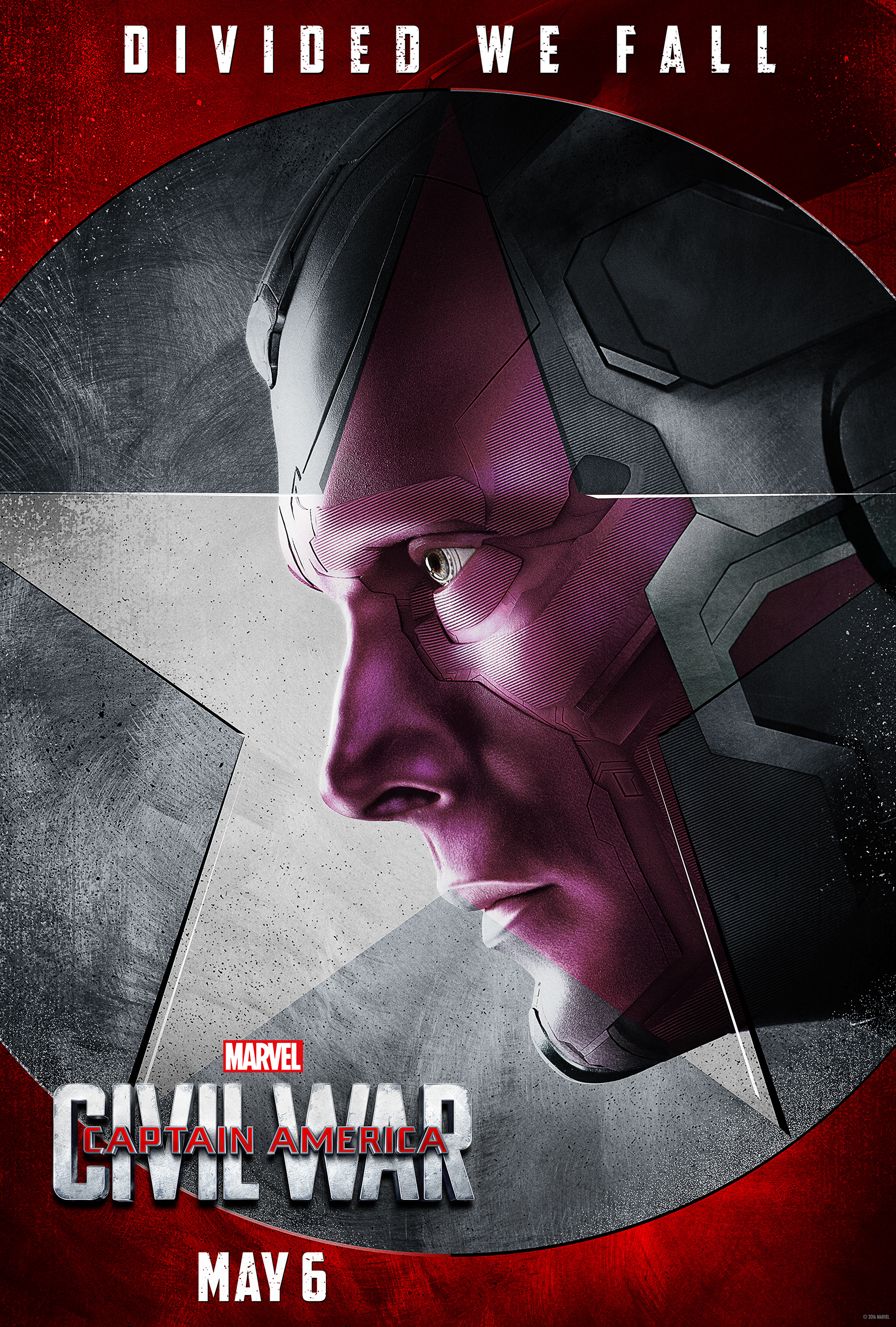 He walked into the room looking like a movie star with a big grin. Full of energy and ready to bring it, he started the interview joking around

What can I do for you all? Probably wondering why I brought you all here?

So, the directors were telling us a little bit of how hot it was filming the airport scene. Can you start by sharing with us about the makeup process and the struggles with the heat?

Yeah, it was hot. You come out of your air-conditioned trailers in your costume and makeup, and everybody’s looking rather like super heroes and movie stars. And then in about not point 5 minutes later in 105 degrees Atlanta weather, you look a lot less like a movie star. Initially, everybody looks so great, and then you just see people kind of like, ugh. Both me and Chadwick (Boseman/Panther) had this special suit that goes on underneath. Which  pumps ice cold water through it. Yes is nice, isn’t it? If you can imagine — close your eyes and imagine being inside a gin and tonic. It feels exactly like that.

So, can you talk a little bit about you and what to expect with the relationship with Wanda?

I think you find Vision in this movie on a sort of personal quest. In the previous movie you see him born. Which I don’t expect ever to do on camera again in my career. He is naïve and yet omnipotent in sort of struggling with learning about the world. And I think in this movie you find him trying to be more human. And we found ways to realize that visually with him wearing human clothes. Albeit from the 1950s. But human clothes. And the reason I think he’s doing that is he’s kind of interested in working out how loyalty works. And I think that loyalty probably works through love. Logic doesn’t really afford for loyalty because if new information comes to light, he might well flip and be on Captain America’s side, right? But love is the water that makes soil hold roots, right? So, I think in order to protect humanity, he needs to understand what love is. And he and Wanda both share certain similarities. Which is they don’t know the extent of their powers. And that’s terrifying. I mean, you’ve all got kids, right? When children grow to understand where the walls are, they need boundaries. It’s frightening. And you see it in every playground that you’re in with your own kids when a hasn’t given their child boundaries. How mad children are when they think they own the whole world. Do you know what I mean? And that they are absolutely at the center of it. And so I think that they’re both struggling with that, and it’s kind of terrifying them. And Vision working out what love is will be very important moving forward in terms of humanity.

Now that you are also directing, is it helpful to you as an actor?

Yeah. I think more actors should do it. It really gives you much more of a respect for the directors that you work with. And I really enjoyed my own period of being an actor and just enjoying my responsibility because you’re obviously taking care of a much larger picture as the director. And your day is just filled with a thousand questions. 99% of which are what color do you want the red shoes to be? What? And then 1% of them being absolutely are ones of the triple questions that are gonna make you old. So, it’s given me a lot more. It’s been amazing. And I loved doing it. And will do it again. I’ll do a comedy next time.

I read that you hadn’t watched the Iron Man movies in the beginning. Have you watched them now?

Yeah. When you work you enter an interview with a journalist where they ask you, have you seen the movies? And you say, oh, no, I haven’t seen the movies. And then you go on to say, but then I don’t really see 80% of the movies that I’m in. But they don’t use that bit because it’s a much more eye-catching, the headline is Bettany doesn’t want the Iron Men movies. I did my homework, and I watched them all. And I really loved them. I think that the stories are becoming more and more rich and complex, and I think you see that in this movie. That both in terms of the interpersonal relationships between all of the superheroes. Often these sorts of movies are just plain escapism. This movie talks about some of the things that we sometimes want to escape from. Unilateral intervention from a super power is really what, on one level, this film talks about. And the need for a strong regulatory body. And that’s pretty topical stuff. Which is amazing for a movie that’s this broad and this much of a popular franchise. I think to touch on those sort of subjects is kind of great.

How do your kids feel about having a superhero in the house now?

I mean, they love it, actually. And my daughter met me as the Vision for the first time, and I think she was just three. Or maybe just even about to turn three. And she just ran up to me and gave me a hug. She knew entirely who it was. And had been very worried what her response would be. And then at the end of the day when I took it all off she had her first ever meltdown. And she went, I want purple daddy, you know? Which, as I’m sure you can all imagine, was a little depressing.

How much of you look was a costume, makeup, and CGI?

It’s mostly costume and makeup. And then there’s some sort of circuitry; I don’t know how to describe it. The makeup starts from under my eyes and goes all the way to here…and then goes all the way under. (most of his face) There’s this much of my body out in the open. What the CGI does is continue the lines and circuitry into my eyes…

So, they weren’t contacts?

No, there were no contacts. They stopped short of that. They think, we’re punishing him enough than to put contacts on him. Poor bastard’s in spanks and a muscle suit. How about let’s give him some contact lenses?

How many hours did it take for full costume?

Two and a quarter hours. And initially the makeup was somewhere between and hour and a half and 2 hours when everybody’s rusty and they’re starting off again. You know, and then they quickly get it down to about an hour. Which is frankly amazing for the transformation that that they achieve. And then the costume is about 45 minutes. So, you really have to plan how you’re hydrating yourself because that’s a 45 minute reset when you need a break.

What was it like being the voice of Jarvis for all those movies and then finally becoming a character?

Well, I just love it. I mean, it’s a double-edged sword, of course, because I used to show up for 45 minutes, talk a bit and they’d give me a big bag of cash. Now I gotta got to Atlanta and wear spanks. It’s been so much fun. I loved doing it and I look forward to it when the date is set for the next one. It’s lovely. You meet a bunch of people that you know it’s like coming back to a family. It’s lovely.

Can you put to rest any rumors about playing Bond?

It’s an impossible question. But it’s very flattering that there’s this talk, however, I can’t confirm or deny.