Disney and ABC recently sent me an invite that will take me back to Los Angeles to cover the film release of McFarland, USA, the In-Home releases of both Big Hero 6, Tinker Bell, The Legend of the Neverbeast, as well as the upcoming ABC comedy Fresh Off the Boat and the Disney Channel Original Movie Bad Hair Day! 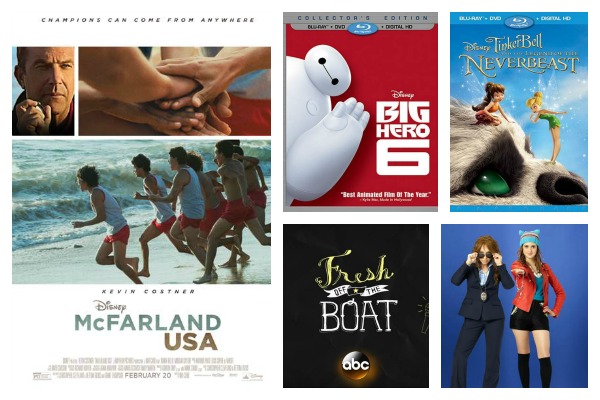 For the McFarland, USA portion of the trip, I will get to attend the press junket were I will interview Kevin Costner and additional cast, filmmakers and the real life inspirations behind the film!  The film has such an inspirational feel, and being a Costner fan, and watching his trailer, I am thrilled to be taking part in such a great event.

It’s a great thing that I love to attend any sort of special press day at Walt Disney Animation Studios, for this time around it will be for the In-Home release of both Big Hero 6 and we will interview the filmmakers, Ryan Potter (voice of “Hiro”), Daniel Henney (voice of “Tadashi”) and Scott Adsit (voice of “Baymax”).  Did you see Big Hero 6?  I love the animation!

And instead of having one press day, let’s make it two, for I will also be attending a special press day at DisneyToon Studios.  This one will be for the In-Home release of Tinker Bell and the Legend of the Neverbeast and will interview the filmmakers and Ginnifer Goodwin (voice of “Fawn”).  Once Upon a Time fans, yes, Ginnerfer Goodwin!  Squee!

Then, also part of this press trip, I will preview two soon-to-air episodes of ABC’s new family comedy, Fresh Off the Boat, and meet with the show’s Writer and Executive Producer Nahnatchka Kahn as well as available cast from the show.  It looks so funny!

And last but not least, I will also screen the upcoming Disney Channel film Bad Hair Day followed by a Q&A with star and Executive Producer Leigh-Allyn Baker.

Whew, all this packed into 3 full days in LA.  So if you can think of questions, or have something you’d like to share about any of the entertainment I will be covering, please tell me!  I sure am looking forward to sharing all the fun via all my social media platforms.

*I have been invited by Disney and ABC to participate in the mentioned event.  All opinions are my own.