If you aren’t familiar with who Riz Ahmed is, after this awards season, there will be no questions. Now nominated for a Golden Globe and Screen Actors Guild Award for Outstanding Performance by a Male Actor in a Miniseries or Television Movie for his performance in The Night Of, an HBO miniseries and currently starring in Rogue One: A Star Wars Story as Bodhi Rook. 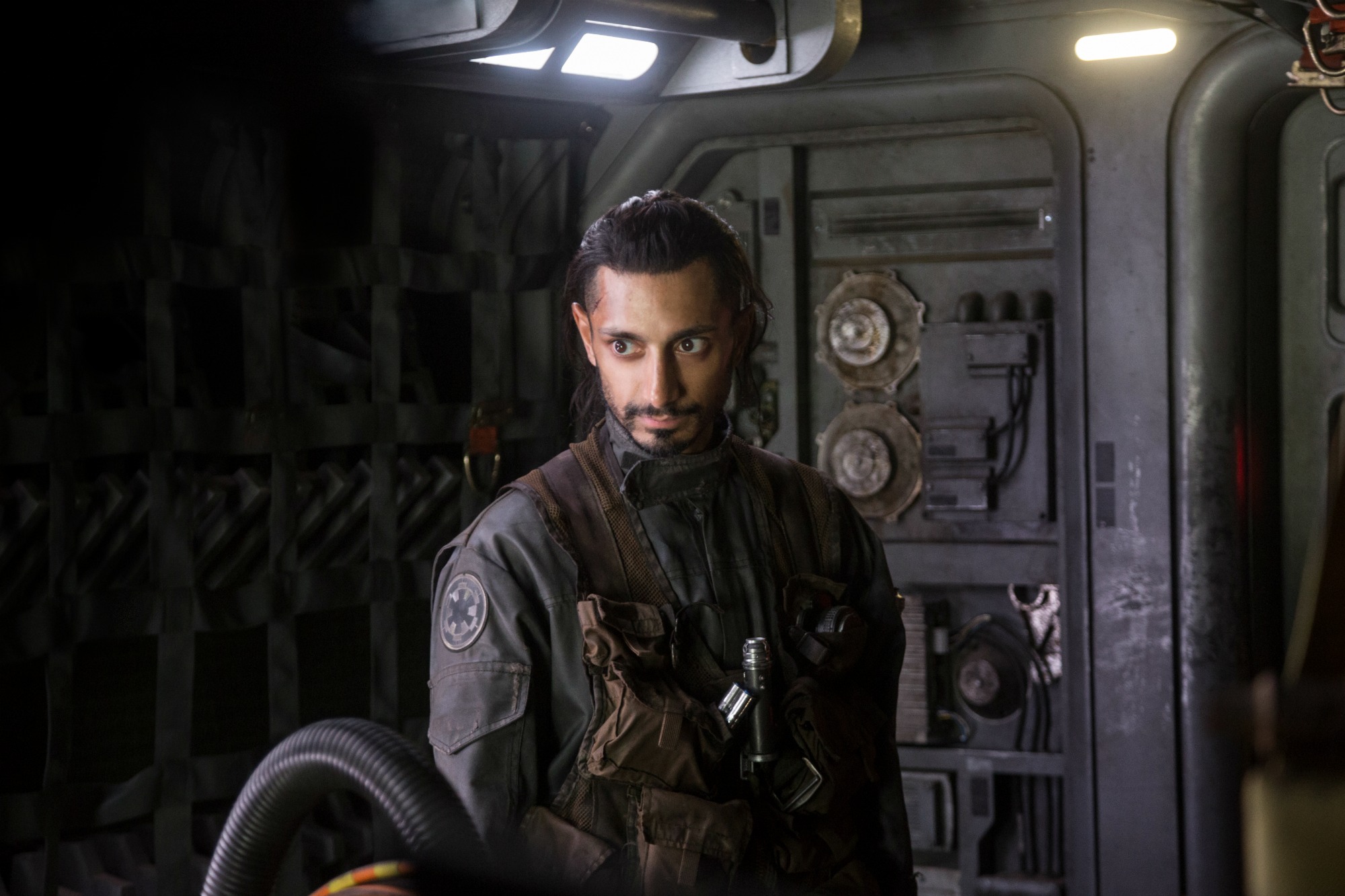 We had the chance to sit down with Riz during the Rogue One Event. Here’s an inside look at his character and how Bodhi Rook took part in naming Rogue One.

What can you tell us about your character?

My character is called Bodhi Rook, and he works in the Empire. He’s a cargo pilot from this planet called Jedha, which is occupied by the Empire. He’s just trying to earn a living with the main employer in the only show in town is working for the Empire. The name Bodhi means awakening, and he goes through a kind of awakening and realizes that that’s not the way. He’s got to try and stand up for what he believes in to make a difference. So he takes a big risk, and defects from the Empire to seek to help the rebels.

When we were taking a group shot with Diego Luna, Riz walked up for he was our next interview. It was obvious that they are good friends.

We saw you and Diego joking around out there, what was the onset vibe? 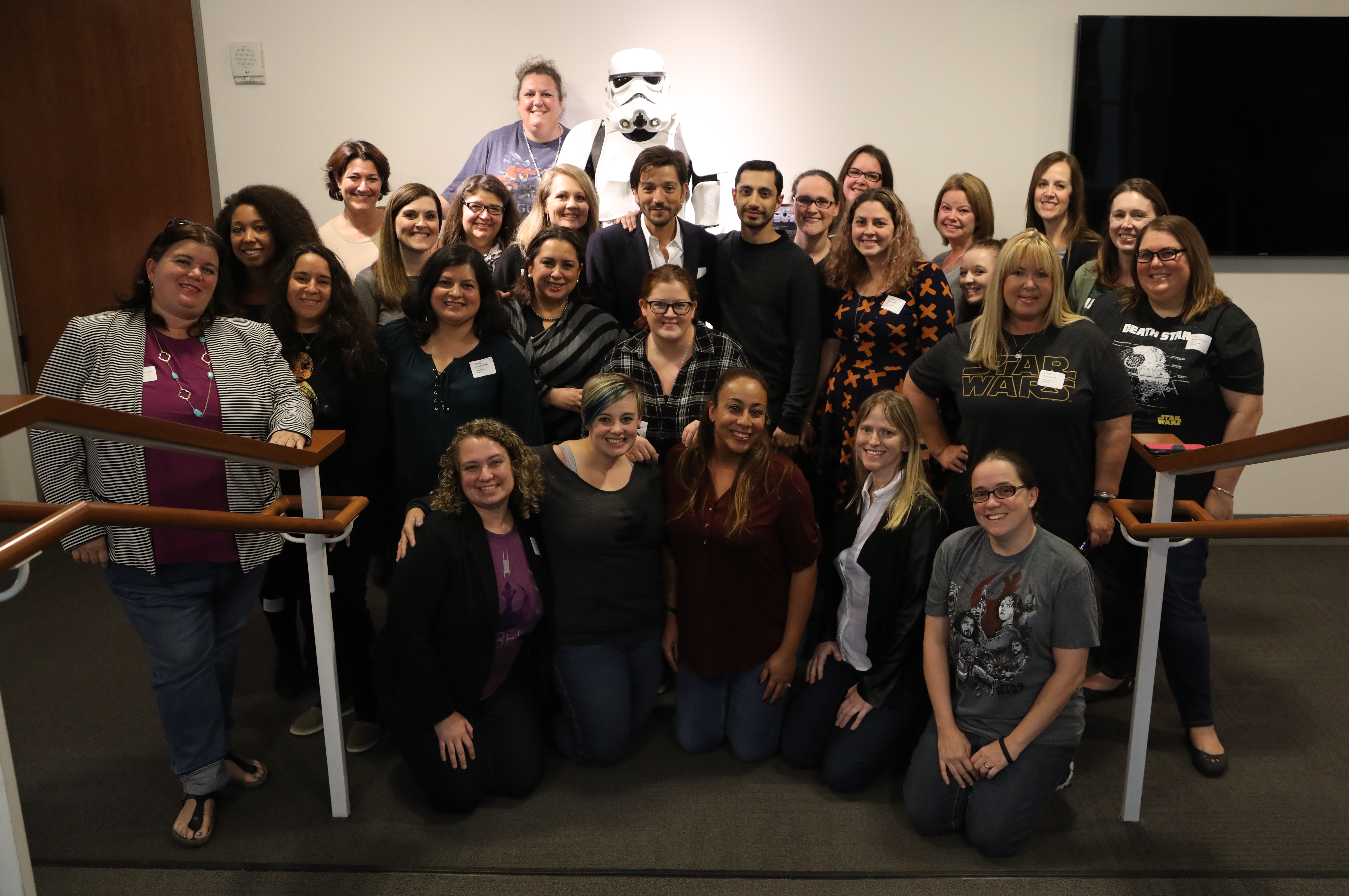 We ended up spending a lot of time together because it’s quite an ensemble [in the] film and story. It’s really about this gang. It’s about myself, K-2SO, Cassian, Jyn, Baze, and Chirrut. We’re this troop, and so we spent a lot of time together closed off in sweaty space ships. We got to keep each other alive, and awake, and we cracked a lot of jokes. We definitely had to make each other laugh and keep each other’s energy up. We bonded.

How’d you wrap your brain around STAR WARS?

The difficult thing wasn’t so much of  – Oh my God, I’m in Star Wars – because, in a way, that was a joyous thing. That was something that was exciting and makes you want to work really hard. If you love a job, that’s not a bad thing. The thing that was difficult is when I’m playing a character; I like to try and interview people who are close to that character.

When I was doing The Night Of, I went to visit Riker’s Island prison. I interviewed lots of people that have been to prison. But you can’t interview anyone who’s an Imperial cargo pilot (ha!), none of them wanted to speak to me. You don’t really know where the reference points are, where starting points are. In the end, I realized that the reference point is the world that is around you. When you turn up on set, and they’ve built these mountains and space ships. Alien creatures are walking past you; the preparation doesn’t have to be in your head,  it’s right there in front of you. You just have to soak it up. So that was quite a big exercise in letting go when I can be a bit of a preparation freak.

Do you and Bodhi Rook share and character traits?

I’d like to think that he’s quite a relatable character for a lot of people. He’s just an everyman – an average Joe. He finds himself in a crazy situation. He’s not like Cassian, who is a rebel spy. He’s not like Baze, who is a hardened assassin, or Jyn, who is a criminal rebel. He’s just a truck driver, basically, and he finds himself in the middle of this crazy intergalactic heist movie. He freaks out a little bit! I think I’d freak out in that kind of situation. I think most of us would.

Felicity Jones and Diego shared some of the things they had to do to prepare physically for their roles. Did you have to do the same?

I was so muscly; I had to lose weight so that Diego didn’t look too bad. That was the main issue for me. (Laughing) No, my character isn’t a soldier. So he’s not super physically fit. He needs to look like when he’s running through a war zone with a 50-kilo backpack on him; he’s out of breath, and it’s difficult. My preparation was to get really out of shape and just kick back.

So you got to eat donuts while everyone else had to stay fit.

Yeah. A lot of Netflix and donuts. That was my preparation.

Three words to describe your character.

It was the last day of shooting during reshoots. So this is the very, very, very last day of shooting. John Swords, one of the producers asked ‘Can you do a take when you say this?’ So it was a very last minute thing they threw in. It wasn’t like I read the script and was, like ‘yes! I get to name the team!’ It just happened. It’s really interesting, a lot of the film took shape like that – it evolved. My character started out as a totally different character with a different name and a different job; even with a different relationship to the other characters. I think that’s cool. When you do these big movies, there’s a lot of people think that it’s quite stiff and everything has to be planned out beforehand. Actually, it is kind of the opposite, at least with these guys. They’re willing to move around as much as they have to to make things work and make them as good as they can be.