I met Vanessa Marshall a few months ago and had the chance to spend a little fun time with her shooting selfies and talking about girl power.  She is awesome.  So when I saw we’d be interviewing her and her co-star Tiya Sircar for the Star Wars Rebels press junket, I felt like I would be seeing an old friend again.  I also looked forward to hearing what Tiya had to say about also being part of Star Wars Rebels.  I mean, it’s STAR WARS, and these girls are perfect for their roles. 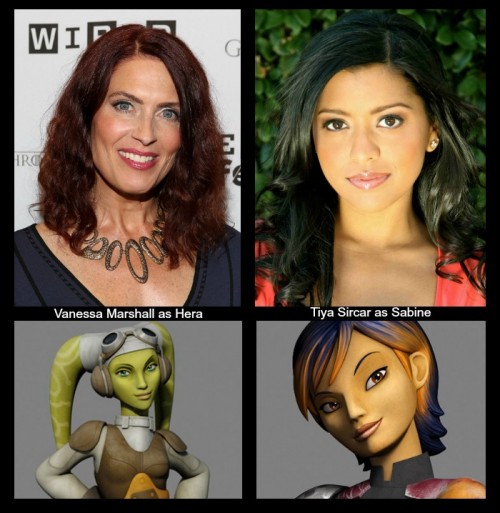 What was it like auditioning for the roles?  Was it really nerve-racking going into a Star Wars audition?

Tiya:  Not as much as you might think, ’cause we didn’t know what we were auditioning for.  So, that helped in that probably you weren’t freaking out and, (turning to Vanessa) if you had known?

Tiya:  Well, we were told — well, I was under the impression I was auditioning for a new animated series on Disney called Wolf.  So it wasn’t until I actually got the phone call that I had gotten the job, which was great.  And they said —  by the way, it’s Star Wars.  And I was like, well, you know, it’s like doubly exciting, ’cause I got a job and it’s not — it’s way more exciting than I even realized.

Vanessa:  Well, I didn’t know what it was, but everything’s a Star Wars metaphor for me.  I’m a huge Star Wars fan.  So, I felt that there were elements of Star Wars within the piece of copy that I read.

Freddy mentioned the same thing in the interview we did with him as well.

Vanessa:  Yeah, well, they said that my character was a strong leader against the tyranny and da da da.  And I’m like, hmm, well, all right, well, alliance.  So, I actually sort of transposed what I know about Star Wars onto the little copy (She chuckles), and I got a callback.  And I thought, oh, cool, I’m gonna be a wolf or…(Laughing).  And when I got to the callbacks —

Tiya:  Oh, you saw a character.

Vanessa:  I saw a, a drawing of the character on the wall, and I know what race that is.  I mean that’s not a Trekkie.  (chuckling) You know, I know exactly what’s going on here.  And it sort of dawned on me in the moment, and I had to pull it together.  Because I’m such a huge fan.  If I really thought about it, I’d probably have a heart attack.  But I’m also a professional, so I was able to do my job and I showed up and I did a good job clearly and then I got the call.  Then, then I hyperventilated.  And my agent was literally afraid for my life.  (Laughing at the memory)  She was like, “Honey, do I need to call a paramedic?”  And I mean she probably should have, ’cause I couldn’t stop going, oh, my God, oh, my — you know, I was crying.  Ohh, anyway.

Tiya:  Freddy also says that he figured it out, because Freddy and Vanessa —

Vanessa:  No, no.  Well, I even said to a friend of mine who read for another wolf, I said — do you think this is Star Wars?  And he said, “you’re such an idiot. ” (laughing) “Everything is — Star Wars, Vanessa.”  Yeah, exactly.  He was like, yeah, you with your Star Wars.   Should’ve bet him money.  Yeah, anyway it was probably a good thing that I didn’t know what I was doing ’cause I would’ve been terrified.

How do you feel portraying these strong female characters?

Vanessa:  Well, Hera is the leader and while she is fierce, she’s a great fighter and a great pilot, she’s also very nurturing, and she sort of plays a maternal role within the crew.  And I think she sets a really great example and I think she does a lot of mentoring to Sabine.  Now, I will also say parenthetically as a Star Wars fan, she is a Mandalorian.  So I personally bow down to her character.

Vanessa:  Right.  Getting back to Hera.  But I do think it’s really wonderful that Star Wars Rebels embodies two female characters that we all can aspire to act like them whether we’re adults or children or even little boys or little girls.  I’ve said before that the empire universally oppresses all races and all gender to where it sort of neutralizes elements.  These aren’t good women or good female characters.  They’re all good people.  So that we’re not even thinking in terms of gender or class.  We’re united towards doing the right thing.  So, while they are strong, female characters, it’s also kinda cool that there’s this different element that even transcends those distinctions.

Tiya:  And not to get too, you know, well, social commentary on you, but you know, in my own personal opinion, there are, so many female personalities that, well, for better or worse, there may be famous not for a specific skill or talent but just famous for the sake of being famous.  And maybe not for the right reasons — if you know what I mean.  So, it’s such an honor you know, and it makes me cringe, you know, I don’t have kids, but it makes me cringe to think like all little girls are like — this is, this is what they have to look up to and to aspire to be, and it’s worrisome for me.  So, to me, it’s such an honor to get to play this female character who, you know, Sabine’s a teenager and yet she is so intelligent and not even concerned about the superficial stuff whatsoever.  She’s never taken a selfie in her life, you know.  (Laughing)

Tiya:  And if she knew what that was, she wouldn’t be interested.  So I think it’s amazing to get to play these two smart women.  They are right there alongside the guys, beating up the bad guys.  And, I hope that young girls and young boys, can aspire to be like these characters, because they’re fighting for the greater good. They’re doing the right thing and they’re just like really smart and savvy about it while they’re doing it.  So, I hope that it might replace some, other stereotypes out there.

Vanessa:  Yeah.  Yeah!  And I think also that what we’re all driven by is hope.  Once again in transcending gender that I hope that kids take that hope that it’s important to have faith, to have morals, to have ethics, and adults could probably learn from that as well.  Some of those bigger human values that are not often embodied in, say, the people who are famous for things less than, you know, desirable.  But, it’s really cool.  I agree, definitely.  These are really cool women, for younger girls to emulate.

Talk a little bit about how you guys record the voices in an open studio altogether instead of being in a sound booth by yourself which usually happens normally. 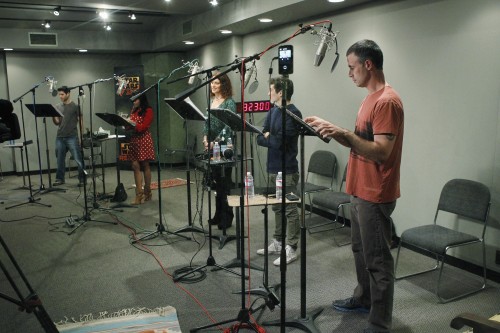 Vanessa:  I love it.

Tiya:  It’s such a  such a treat, because — well, you’ve done far more voiceovers than me.  (Turning to Vanessa)

Vanessa:  Well, yeah, oftentimes in animation and animated series, they try to get the entire group together, but the previous Star Wars video games that I’ve done, I’ve been in a room by myself, on a quote unquote Jedi counsel talking about people. You know, I mean, luckily, I know enough about the different places and things in the Star Wars universe, but it’s so much easier to interact with people, you know.  We all love Star Wars, but that collective energy in the room is something that I think viewers will feel.  I think it’s a real advantage.  And like I said, the writing of the scripts is so great.  It’s really not that hard to do.

Tiya:  It doesn’t feel like work certainly for me.  Also I think, what’s really makes the experience so special is to actually act these scenes out in a room together you know, not is it more enjoyable for us, but it infuses the scenes and hopefully makes for a better show.  But aside from that, I think we really forge this family, this Motley Crew of people.  Like we have this Motley Crew of characters.

Tiya:  And so, we’ve like created this bond as a crew, you know, the five of us and also,our guest stars — but the five of us really have embodied the same dynamics, familial dynamics as we have on this show.  As Vanessa was saying, she kind of is this maternal figure making sure I am not hungry — do I have — need a snack — am I cold; do I need to borrow her cardigan. I mean it’s just the best.  And then, you know, like Taylor is the youngest, and so we’re always kind of, you know, giving him a hard time.  Freddy is like the big bro and making sure everything’s cool and under control.  And Steve is like the, the clown —

Vanessa:  He is hilarious.  That’s fortunate that we all have sort of fallen into a groove that’s very similar to what we need to —

Tiya:  To do and embody in the script.

Who are your favorite characters in the Star Wars universe?

Vanessa:  Well,  we both love Princess Leia, because she’s a strong female character, but I also don’t wanna forget Ahsoka from the Clone Wars because Ashley Eckstein is so wonderful and we watched her journey towards becoming a Jedi.  I think it’s the same principles of women who are strong on so many levels that they’re really inspiring.  So, I would say, overall, probably Princess Leia. 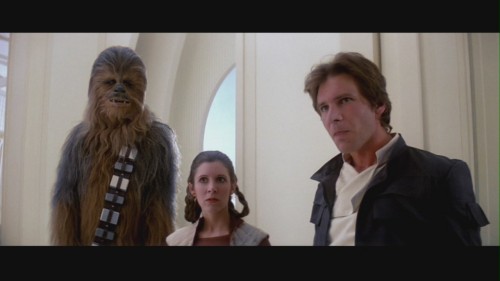 Tiya:  And I have a soft spot for Han Solo, but who doesn’t?  I mean — but as inspiration, Leia.  (she laughs) For my own viewing pleasure, Han Solo.

Vanessa:  Yeah, ’cause I sort of believe that I love Chewie, but I think that’s born on the fact that it was my first action figure that I got.   But in terms of things that have really touched my heart, I would say Leia.

Follow @DisneyChannelPR and @StarWars for the latest news on #StarWarsRebels, and check out StarWars.com for more exciting news on the series.

movie being released on DVD!

*I was invited by Disney to be part of the Star Wars Rebels press junket where all my expenses were paid.  All opinions are my own.