Watching many young actresses grow up through my daughters eyes has been easy.  With all the shows they watched for years with young up and comers, it’s always fun to get to interview the ones that the girls know.  Bella Thorne is one of those actresses.  Born Annabella Thorne, Bella started her career pretty much since birth, shooting her first pictorial for Parents Magazine at 6 weeks old.  Her IMDb shares acting credits as early as 2006, but my girls know her best from Shake It Up, where she played dancer CeCe Jones from 2010-2013.  Bella was on the press junket for Alexander and the Terrible, Horrible, No Good, Very Bad Day for she plays the girlfriend of Alexander’s older brother.  She plays the not so nice girlfriend role perfectly and in this interview shared the struggles of being dyslexic in a world that memorization helps her do her job, and her job gives her a voice to help others. 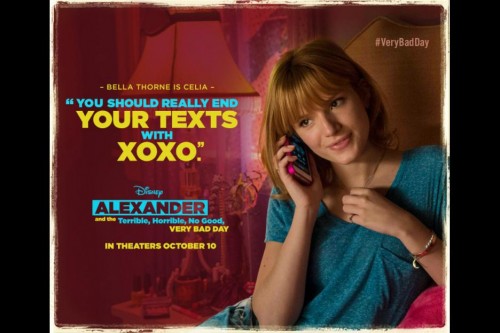 So, what brought you to this film?

Well, first of all, it’s with Steve Carell

And Jennifer Garner.  I wanted to be part of this film, because I like the script.  I like what it stands for.

Yeah, it’s a very good film with a great message.  What was your most fun scene to shoot?

Probably when we were in the car with Steve and everybody’s making those loud noises.  It was cool, because Steve’s obviously funny but he knows that, but, in this scene, it was just so weird and so funny.  It was so weird that I’m sitting in a car with Steve Carell and he’s just being ridiculous.  And it’s so funny.  I’m the one that’s supposed to be really not laughing, and Dylan starts laughing.  He starts like kind of cracking up.  Then Ed.  And then comes me laughing because they’re right next to me, and I just can’t help but laugh now.  And I was like guys, stop, stop, you’re making me laugh.  And — it was so funny.  It was actually really fun to shoot.

Being the mean girl is kind of a departure for you.  So, I mean what were you, what were you channeling?  Some of your own experiences or I mean how, how did you find Celia?

You can’t think of Celia as a mean character, ’cause she’s not.  You have to think of Celia as a perfectionist.  Now, you guys are all moms, so let’s say I’ve completely organized these phones all in a very great order, okay, very straight, and somebody comes in and knocks this water over all you guys’ phones.  Are you guys gonna be mad?  Probably mad.  And so, Celia, she’s a perfectionist, and when things don’t go her way, she wants to make them perfect, and when someone keeps messing that up, she ends up getting angry.  That’s understandable.

Funny, interesting, and not so forgiving.

How familiar were you with the book? 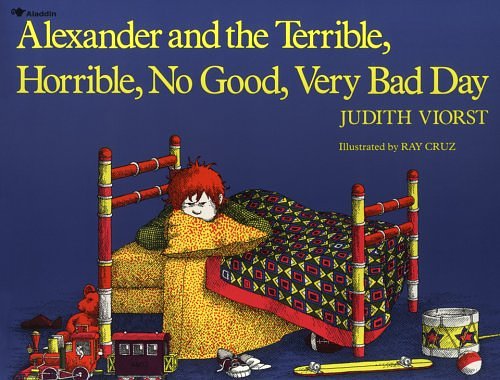 When the book was really, really famous I was young and I was really uncomfortable having dyslexia at that point.  So, I didn’t read it, because I didn’t want to read.  Now I’ve read it, and, you know, I’ve read the script obviously.  And the movie, obviously.  So, yeah, now I’m familiar with the story.

What was the hardest part of filming this movie for you?

The hardest part about filming this movie is probably the really long hours.  I don’t think people realize how much work actually goes in, not just from the cast, because, of course, the cast works hard, but the crew members.  You’re there, your scene could be 15 seconds and you look at that scene and you’re like, yeah, whatever, you don’t think anything of it.  That scene took 16 hours to shoot.  And maybe a couple days, 16 hours a day.  That’s crazy.  It’s crazy to work that many hours and it’s crazy to always be on that many hours.  So, I think the job is a lot harder than people wanna admit, and so what you have to think of is your crew (she sighs).  You know, everybody’s like, oh, we’re doing the skies.  We’re doing this take again.  Okay.  And you’re doing the same thing over and over.  And especially with comedy, it’s worse, because comedy falls flat if you do it more than four times.  And then you’re beating a dead cow and it’s not funny anymore.  And then you get frustrated, ’cause you’re not funny.  So, that’s the hardest part about filming a comedy.

So what do you think was the hardest scene for you to film?

Okay.  This scene is the dinner scene when Steve gets lit on fire.  It’s so hard to film a scene with stunts, you know, it’s very hard when you’re doing stunts and tricks.  Everybody’s great and has awesome energy, but I was called in at 4:30 am, and my coverage ended up being last.  Because you have to get Ed and some of the kids that are younger than me in the film out earlier than me, they can keep me.  So, my coverage was last, and it was like 11:30 I wanna say, and I was tired.  I was tired, and I’d been doing this scene all day long.  There’s a word in the movie and it’s the name the place that they go do dinner — that weird, weird name.  Why couldn’t I have just said Benihana’s?  Okay?  I would’ve been happier with Beni freakin’ hana’s. 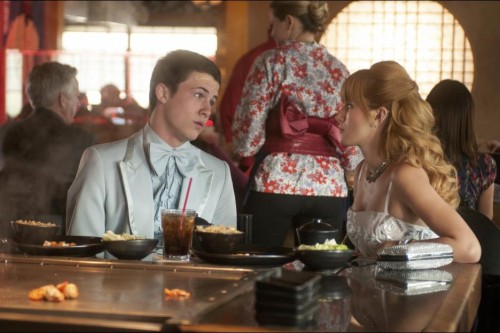 And I had to say this name, and when you’re dyslexic, you’re usually really good at memorizing, so I’ll read something once and I have it completely memorized.  But that word when I first read it, I didn’t say it correctly, and so I was on set and somebody said, no, it’s actually like this.  So, I had already memorized it wrong.  Um, and they kept trying to get me to do it right.  I did maybe 25 takes of that same exact line over and over and every time I got it wrong.  Finally, the time that I got it right, Dylan is so overworked, ’cause he’s the other actor in the scene, so it’s just as bad as it is for him, and he looks at me and he starts bursting out laughter and ruins the whole take.  And I was like, Dylan, I might punch you in the face right now.  (Laughing)  And he just could not help it.  So, every time I got it right, he was chuckling, because it had been such a long day.

Did you go to a traditional high school?

No, I stopped public school in third grade.

What was it like to play that or to play a traditional student? 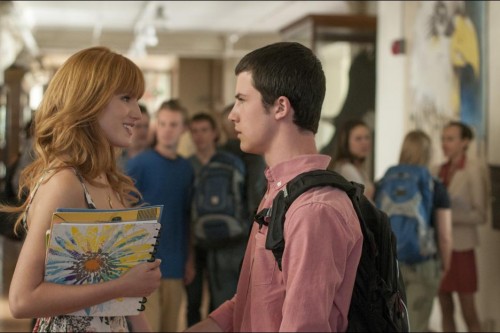 Okay, so I’m dyslexic.  My first language is Spanish.  I had to drop Spanish to learn English to then learn how to read.  You can imagine how hard that must’ve been.  I was bullied so much in school that the only thing everybody would tell me was, “oh, you’ll probably be popular in high school”, so I was always looking forward to high school growing up as a kid and those lockers.  You didn’t have lockers in third grade.  So, when you looked at the kids that were older than you and they had lockers, it was really cool.  It was so cool to have those lockers.  And I was just like, I can’t wait till I have those lockers. And you know what?  I don’t have those lockers.  I’ve never had those lockers.  I’m still angry about it. (Laughs)

Well, you know, I’ve been to school dances.  What’s really weird is they have you go there at six and then you can’t leave till 12.  I go to bed every night at 10:30.  Okay?  I’m not a night owl.  I don’t like staying up at night.  The only reason I’m up at night is to watch Netflix or read a script.  That is the only reason.  I don’t like to go out.  And for these kids, they love getting dressed up and putting on heels and hair and makeup, but I do that every day.  It’s not special to me to wear a big dress and heels and, you know, a lot of makeup and hair spray and be touched in perfect like that’s not a big deal for me.  I’d rather not have all that and be in sweat pants without makeup and without worrying about how I look and what angle I’m being shot from.  That’s not what I find necessarily that fun.  So, when you’re from six to 12 like that, it’s almost like working a long day on a movie set.  So, when I went, I was like, oh, my gosh, you guys, can we get outta here?  Can we go hit In and Out?  Okay, I really need — a burger. (laughing)  I really need it in my stomach.  I’m not kidding.  This food — I don’t know.  They’re serving salad.  Who eats salad?  What’s going on here, guys?  This is weird.  They’ve got fish.  I don’t eat fish.  Uhhh — I don’t eat fancy food.  Well, let’s just go to In and Out.  I want it animal style. 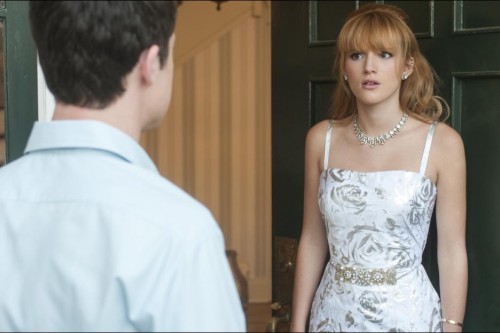 Okay, I’m gonna give them a piece of advice that I was given and I wish I would’ve taken it.  Growing up on TV, and I really grew up mostly on Shake It Up, and I always tried to be perfect for everybody and I wanted everyone to like me.  For some reason, I really cared what other people thought so much and I would do anything to get someone’s stamp of approval.  And now that I’m, you know, 17, I really don’t care.  I don’t.  And I wish I wouldn’t have cared so much, because I changed who I was as a person to be who everybody wanted me to be, and that’s not a cute look.  And you have to realize that I don’t care who you are; I don’t care if you’re in high school and you have glasses and braces and you don’t think you’re cool, people will like you for being you, no matter what.  It’s impossible for people not to like you when you’re just being you.  It really is.  You will find a branch, and I have.  I have a great group of friends now and we don’t have to impress each other.  I’m not wearing makeup when I’m with them.  I look ratchet.  I’m looking ratchet when I’m with them.  I’m in sweat pants.  I am oily, greasy, sweaty.  I don’t care.  And we don’t have to prove anything to each other.  And that’s what’s cool.

That was great.  Thank you.

ALEXANDER AND THE TERRIBLE, HORRIBLE, NO GOOD, VERY BAD DAY in theaters everywhere!

*I was invited by Disney on an all expense paid press junket to screen the film and interview the cast of Alexander and the Terrible, Horrible, No Good, Very Bad Day.  All opinions expressed are my own.  Images courtesy of Disney unless otherwise credited.  Interview edited to make it easier to read.