Did you get to watch Star Wars Rebels: Spark of Rebellion last week?  Ahh, if you are a Star Wars fan you probably were right there and loving every second of the new Disney XD animation!  This week I am sharing the fun chat I had with Steve Blum that voices Zeb, and Tayor Gray voicing Ezra.  If you missed the interviews I shared with Freddie Prinze Jr (Kanan) and Dave Filoni (director and producer) or Vanessa Marshall (Hera) and Tiya Sircar (Sabine), make sure to check them out too. 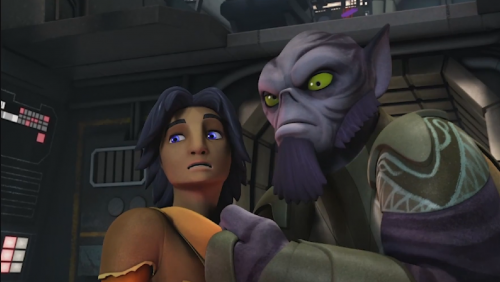 What drew you guys to this project?

Taylor:  I love it.  I think it’s so cool.  My favorite part about it is all the action.  I think that that’s so fun.  I think kids are gonna enjoy all the characters and their multiple layers and how they run around firing off blasters and taking down troopers.  I think it’s all a lot of fun.  It’s action along with a lot of nice dialogue.

Steve:  I was drawn when I was a kid when I first saw it.  I was seventeen.  I was fresh out of high school, and I went to the premiere in 1977, and I was one of those kids in the theater whose head snapped back when the imperial star destroyer comes across the screen and the whole theater rumbled.  So, I get to relive this on a cellular level.  It activates all of those memories from that time and when I was graduating high school, I was one of those apathetic youth and I didn’t go to my own graduation.  And to get to go and see something like that that was brand new.  It was stuff that we hadn’t seen before.  It woke up something in me and kind of gave me a new hope.  But to get to work on something like that now where it’s, we’re bringing this to a whole new generation.  It’s really exciting for me, and I’m a dad.  And so I like working on quality programming that’s  safe for kids and it’s really got a great underlying message.  It does offer a notion that there’s something bigger than we are and that we can strive to be better than we are and that a small group of people can be just as powerful as a large army against injustice.

Taylor:  And a little bit of the force.

Steve:  And a little bit of the force, yes.

Were you a Star Wars fan prior to this?

Taylor:    Um, yeah.  I hadn’t seen all the Star Wars movies.  I had seen 4, 5 and 6.  It’s a nice joke with us, because we have some people in our cast, Vanessa and Freddy and then Dave as well who know more about Star Wars than anyone I’ve ever met.  They know things that I think aren’t even in Star Wars!  And Steve knows more than I do as well, but it’s been fun because it’s cool to be a fan. I’ve now caught up and understood why everyone loves it so much.  I remember being in school when I was little, and every other kid had either a Star Wars shirt on or a lunch pail or a back pack.  And it all makes sense why it’s so appealing, but it’s really cool.  The best part of it is talking to fans of Star Wars and hearing their sentiments and why it’s so special to them, because everyone has their own connection to the Star Wars story.  So it’s been really cool coming up through all of it. 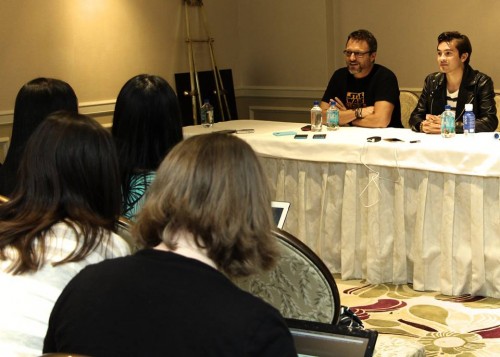 When you came in to read for the Wolf role, was anyone keen on what it could have been?

Steve:  Yeah, I do so many military games and military type characters that I just figured it was some military guy and some fighting show.  I didn’t know what it was.  I do a lot of superheroes also, so I really didn’t know until I think I was in the studio just about to record, and I saw storm troopers in the copy and I went, oh, this is something different.  This is Star Wars.  This is, this is Star Wars!   [LAUGHING.]  Yeah, so  it was that moment of realization.  Dave can probably speak to that about…..

Taylor:  Yeah, I still didn’t pick up.  I was like storm troopers, still probably like Jungle Book.  [LAUGHING.]

Steve:  Yeah, a lot of shows that we auditioned for are coded, they’re very heavily coded.  They want to protect that and we sign non-disclosure agreements once we do know, so I wasn’t allowed to talk about it.  I had to keep all that inside, and thank God I can finally talk about it. 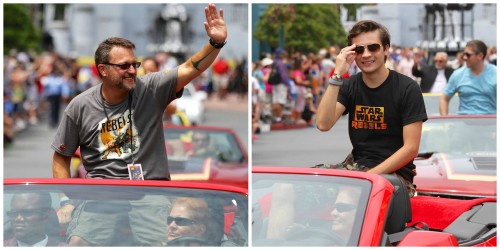 How have you embraced the hardcore Star Wars fans?

Taylor:  I think it’s awesome.  The first little taste of it we got was they sent us to this thing called Star Wars Weekends in Florida.  And I had no idea what to expect.  I was like oh, it will be fun to like hang out with a couple people who like Star Wars and go on some rides.  There were like 60 thousand people who all had Star Wars shirts or full on costumes, wardrobe, outfits, everything and light sabers.  And just seeing that, I realized oh, wow, we’re in something much bigger than I thought.  And it’s been so much fun and they’re saying there’s so much more to look forward to, and I can’t wait.

Steve:  Yeah, I’ve been doing the convention circuit for the last 10 years for my other work and going to that weekend in particular seemed, you know, there was 20, 30 thousand people on the parade route, and they put us in convertibles and we’re waited on.  It’s great, and I’m thinking the show hasn’t come out.  Nobody’s gonna know who we are, and they’re chanting our names, you know.  It’s my name.  This guy had researched and knew everything that we did and people were bringing stuff up to me from my whole career.  It was amazing, and seeing the families, too.  There was this one family where there was a grandma in a wheelchair in her 90’s, and the way down to like a 2-year-old, and there are like 50 of them and they’re all together cheering for us as we’re coming out of the parade route, and they’re in first position right there, and they’re everywhere in the park that we were.  There’s all the signs and they had us take a family photo.

Taylor:  They all had code names.  They were, there was Red Leader [LAUGHING].  They knew what they were doing.  Yeah, ah, it’s so fun.

Steve:  Yes.  It’s been awesome.  It’s a whole different level of fandom too, and so show-specific.  It’s just amazing to me that after all these years, that the fandom is stronger now than it’s ever been.  It’s incredible.

Taylor:  With all the media, it’s crazy.  It’s on Twitter.  It’s, it’s unbelievable.  I’ve been telling people, I’ve had a Twitter before I’d gotten this, and I felt like half the people I see on Twitter somewhere in their little, description of themselves, it’s like coffee enthusiast.  I like my hair.  I’m a Jedi.  [LAUGHING.]  I’ve seen Jedi, so I see the word Jedi in more of those biographies than anything and, ah, I understand why.  They’re the coolest type of person you could be.

Steve:  Hey, you’ve got Freddie Prince, Jr. (on there).  Yeah, he’s on Twitter and he’s going crazy about it.  It took Star Wars to do that.

Since you didn’t know what you were going in for to read for, was there a point of time where you wondered about turning it down before you knew what it was?

Steve:  I don’t turn down anything.

Taylor:  Me neither, but I was doing something else that day, I think and I remember being really late to0, I was like an hour, and not normally would we show up late to anything and I was running an hour late and I remember calling my agent, I’m like I’m late.  I’m gonna make a fool of myself.  I was sweaty.  I was working on something else.  I had a hat on, and I was like I’m just not gonna go into this.  I don’t even know what it is.  And he’s like just walk in.  I think they’re still there.  And I remember walking in like this, so ridiculous.  Like I, I can’t believe I’m late.  I feel so bad.  And then yeah, it worked out.

Steve:  Well, yeah, I treat every role as though it is the most important thing in the world.  And a friend of mine wrote a song called Soldier A, and it’s, it’s about like the, the most innocuous character who, who dies every episode, but you have to invest as a voice actor.  Especially on camera, we don’t have the luxury of grabbing a role and carrying it, you know, through a whole series and being able to depend on that for income.  In the case of the show, of course, it’s a little bit different, but, ah, there’s so many shows that I work on where I am literally fired every day.  I go in, I work one day on a show and I’m on to the next thing, and so I treat every character with great reverence and I’m very grateful for the ones that I book.  So, ah, to have invested that much into something like this and then it fleshes out to something like this, it’s gravy, it’s amazing. 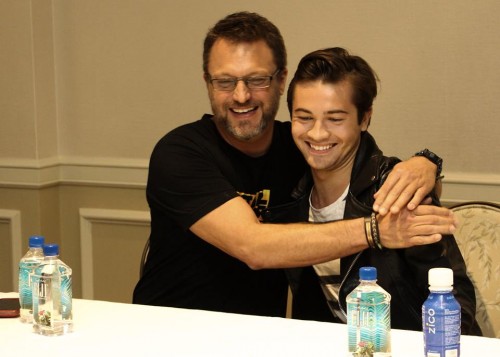 What was your favorite scene to voice over?

Steve:  I love all of it for so many different reasons.  I think one of my very favorite scenes that I’ve seen so far was Ezra’s realization that he was doing something of value.  Ah, after our first initial struggle, and then stealing stuff, and he’s sitting there and we’re giving away food, and that was the whole purpose of our mission.  And we’re risking our lives to do that.  And to see that look of realization on his face where he’s just going, well, I didn’t do anything.  It’s like he didn’t deserve the praise and you see a little bit of a transformation in him and that was, that was a very powerful moment for me.

Another moment is when he realized you came back for him, another strong turning point.

Steve:  And for me actually not taking care of him and letting him go, that was a really hard thing for me to play as, as a dad.  It was really hard for me to just say see, you’re on your own, and leaving him with the empire.  I mean, that was terrible, but thank God we resolved that.  [LAUGHING.]  I can sleep now.

This Season on Star Wars Rebels on Star Wars Video
Follow @DisneyChannelPR and @StarWars for the latest news on #StarWarsRebels, and check out StarWars.com for more exciting news on the series.

*I was invited by Disney to be part of the Star Wars Rebels press junket where all my expenses were paid.  All opinions are my own.