The Disney Magic recently added Tangled the Musical to their onboard entertainment. It’s now playing on stage at the 977 seat Walt Disney Theatre for guests while at sea. I was recently invited by Disney Magic to check out the show and have some lunch at Animator’s Palate. What a fun and delicious day it was. 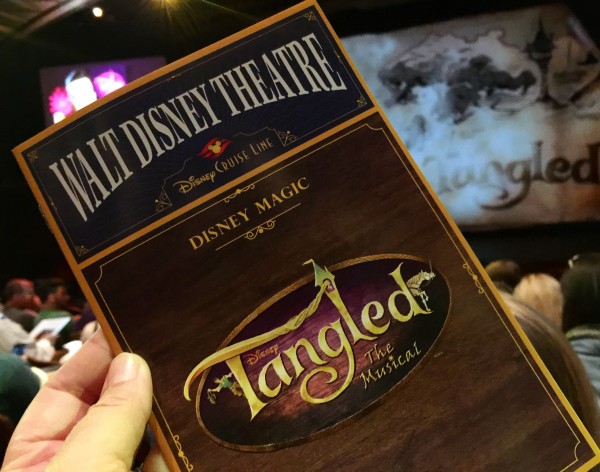 Tangled The Musical is an hour long dazzling production based on the 2011 film. The show tells the story of Rapunzel being kidnapped and locked away for 18 years by Mother Gothel, and Rapunzel’s dream of going to see the floating lanterns that always appear on her birthday. There are some familiar favorite tunes from the film, as well as three brand-new songs created just for this show from Alan Menken and Glenn Slater.

Keeping true to the story in the Disney movie reuniting the curiously spirited Rapunzel, the funny and charming bandit Flynn Rider, the evil Mother Gothel, and of course, they didn’t forget the palace horse Maximus and he’s still bent on a personal mission.

Tangled the Musical and Animator’s Palate

The Animator’s Palate boasts a fun artistical design, with sketches showcasing characters and scenes from Disney and Disney·Pixar films adorn the restaurant walls.

The fun was in the Animation Magic where we all got to draw our very own character and then we watched them come to life as part of the show, dancing alongside some classic Disney characters. It was really awesome!

*I was invited by Disney to check out Tangled the Musical and Animator Palate to share with my thoughts with my readers. All opinions are my own.