There are few shows that I feel like I need to watch live. I am a busy person so the DVR is my friend. But with ABC’s The Family, I have to watch it live, for each episode has me hanging on the edge of my seat. It’s intense. It’s like no other show on television, and if you haven’t started watching, you are missing out.

The Family takes you on a journey of loss and hope, with some creepy twists and turns.

Ten years after the disappearance of her son, Adam, Claire Warren (Joan Allen) still can’t sleep at night. She not only has survived the heart-breaking loss of her son, but has used her resiliency and surrounding adversity in the aftermath of this tragedy to fuel her own political aspirations. Now the Mayor of Red Pines, ME, she is considering running for governor when suddenly Adam (Liam James) reappears, forcing the entire case to be brought into question and freeing the Warren’s neighbor, Hank Asher (Andrew McCarthy), who was convicted of his murder. Deceptions and indiscretions have taken the place of what used to be a happy, loving family. The unfolding mystery impacts the entire family: Willa (Alison Pill), Claire’s daughter and savvy political advisor; Danny (Zach Gilford), the Warren’s cynical eldest son; and husband John (Rupert Graves), whose relationship with Claire is about to come apart at the seams.

The Family on ABC

While in LA on the Captain America press trip, we had the chance to to have a family style dinner as we sat down with Zach Gilford (Danny), Alison Pill (Willa), Floriana Lima (Bridey) and Executive Producers Jenna Bans and Laurie Zaks. We watched the episode airing tonight along with a Q & A session to help understand where the idea for The Family came from and where the story may be going.

Jenna Bans – I’ll tell a brief version of the story. I lived in a house, and across the street was a sex offender, and I freaked out and got really scared. So part of it sort of came from there. The other part was, ABC had been wanting to do this idea and the idea of an imposter was sort of in the ether. They were like, what about that, and make it into a mystery thriller. So I sort of married the two ideas.

We continued the interview with the group and it was refreshing to see the cast in their downtime, eagerly awaiting a season two nod. Alison Pill is so different than Willa, with a youthful face and casual style, she made me realize how large a range of acting skills she exhibits. We asked how she gets into character and pulls out the incredible scenes that she acts out.

Alison –  First of all, we have really good writers, and it really makes sense to me. And then I think, the sort of touchstone for me is the moment when I and Madeline Arthur switch places on the bed in the motel. She’s fully frozen at thirteen. Like she is somebody who will do anything to keep her family together. Everything else that is built up – all of this armor is only to get to her ultimate goal, which is having her entire family under one roof again. That’s it. And every, literally everything else, is driven by that, so when anything threatens that, that is the worst thing that can happen in the world. So all of the emotion just comes from that thought of being thirteen and trying to keep your family together, and I was a very emotional thirteen-year-old, as most are. [laughs].

Zach – I’ve gotta say that I had that same question because Alison’s good. Like, ninety percent of my stuff is with these two (Alison and Floriana), and our stuff is fun and we work together, so I know she’s dope, and she’s cool to work with. You and I have never worked together, and it’s like in episode five, I think it was, where we were fighting into the dusk, it’s over her shoulder; you can’t even see her; it’s my coverage and she’s giving me, like, a Denzel Washington one tear.

Floriana – She does that when she’s not even on the screen!

Zach – I’m like, Alison, you’re not even on the camera. Like, stop. I’m not gonna do that for you. I don’t even know how you do that for me? Stop, stop!

I couldn’t agree more! Emmy worthy, certainly. She along with co-star Andrew McCarthy are fantastic in the show. He plays Hank Asher, a sex offender, who may or may not have anything to do with the disappearance of Adam. He’s an intricate part of the twists and turns of the storyline. I have yet to have seen this type of character on television before. He really is really good. He too, Emmy worthy!

Jenna – I love how Andrew McCarthy’s character, Hank, is written. He’s someone you can hate, yet understand, and somehow sympathize with. The Family really makes you see mental issues with a new perspective.

Floriana – Working with Andrew McCarthy is amazing. It’s weird that he’s a director and also playing Hank, which is this intense character, and he’s just so present as a director, so you’re like, whoa, you’re doing that too? At the same time?!

Alison – I’m surprised how he can be in character and also so present as a director. His character is quite intense so it is a huge accomplishment to be able to do that. Being on a TV show means that different episodes have different directors. That is one of the hardest things about acting on television. It’s not the director’s medium and they are only directing a little bit of the story. I like getting notes from different directors, in fact, it is one of the reasons I love acting.

Alsion – Can I just say Andrew McCarthy directing sexy scenes is incredible? Me as a teenager, I was like, wait, and then we should kiss? Do you wanna test it out? (wink wink) He’s so intense, and wonderful, and brilliant, and it’s so weird because I never saw any of his stuff as Hank Asher. He’s amazing. I had known him as our favorite director and to see him in between setups and crossing paths…

Floriana – It’s weird that he’s a director and also playing Hank, which is this intense character, and he’s just so present as a director, so you’re like, whoa, you’re doing that, too, at the same time?

Alison – I know, I sort of triply appreciate everything in seeing it now. Whoa, that’s what you were up to? That’s crazy.

Jenna – Yeah, he is really good.

Alison – Big MVP this year for us.

Being one of the first ones cast for The Family, Zach is clearly the quick, funny guy that made it easy to see how he was perfect for his role of brother Danny.

Zach – So they built the show around me.

Jana – No, you were awesome. I remember you came in on the day….

Zach – They made me shave in the bathroom. Do you remember this?

Laurie – I do. We had to put it on tape; he was going on tape and we made him shave because he had the president of the company was watching him.

Jana – And then we ended up making you kinda scruffy, anyway. So what was the point?

Zach – I know, but I was bleeding in the bathroom. You made your assistant go out to a store somewhere and buy me a razor.

Laurie – It was a Disney store. It was right in the building.

Scenes with Bridey Floriana’s character are some of the only times we see Danny. But good news, there is a Danny-centered episode coming up that will show us his past. 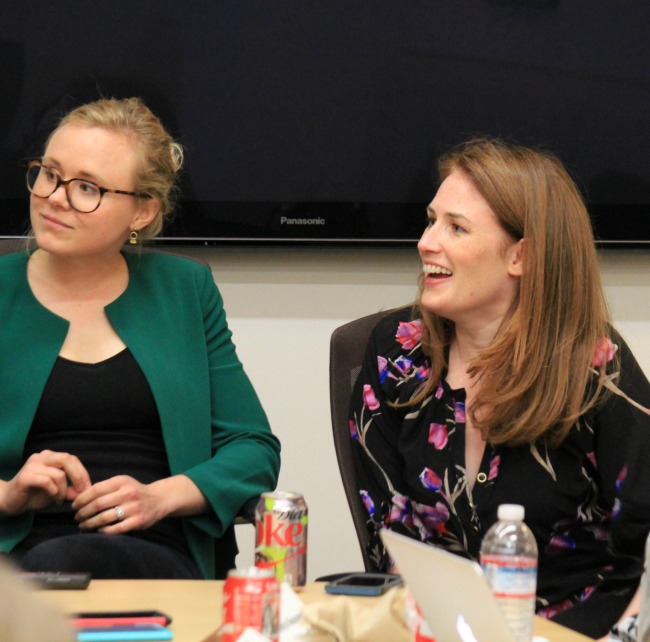 Jana – I think so. Ten, is it ten? Yeah, because it’s Danny-centric with young Danny.

Alison – One of my favorite things about the last four episodes is Danny’s and Willa’s character, and knowing that he’s gonna find about Ben. Knowing just how much of a wrench that’s gonna drive between them in terms of their relationship. You just love them together. We joked in the writer’s room, we’re like, this the romance of the show.

Jenna – Again, the finale sets him up in a big way.

Then there’s the story between John and Claire, the parents on the verge of a marriage explosion.

Alison – The constantly shifting relationships is amazing, too, even looking at Claire and John. What a heart-breaker that’s gonna be – or not. [laughs]. No, I don’t know – it’s not. It’s not. It’s just, like the back and forth of these alliances of us getting close, and me and Claire drift, you never know where you will stand week to week.

Jenna – Which is the way I feel about my own family. Maybe that’s too telling.

Alison – You guys, Joan Allen is so good at acting.

Floriana – She is. She’s really nice, too.

Alison – She made cookies from her grandmother’s recipe; she made a hundred and fifty cookies on her day off and brought them in before our holiday break. They were cakey, amazing cookies with delicious icing.

Jenna – They were so good. – Jenna Bans

Alison – They were really good. She made them by hand. She also did the potato bar. Do you remember that?

Jenna – Yeah. She made a whole baked potato bar for all of us.

Alison – She bought potatoes for…

Alison – She didn’t do that.

Zach – I didn’t even know you could….Joan Allen could.

And friends this is important! Another reason to watch The Family and your other favorite television shows live. If you aren’t watching The Family live on Sunday nights or within 3 days if you have it on your DVR, it doesn’t count towards their viewership, which means there’s a greater chance it could get canceled! The Family deserves a second season! 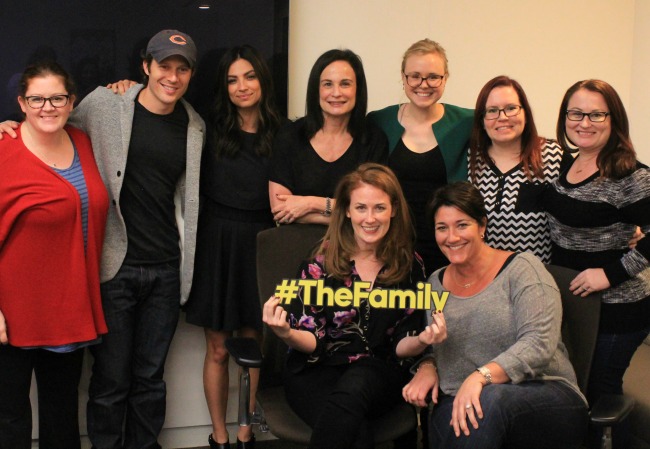 The Family airs on Sunday nights at 9 pm on ABC.

Here’s a look at what to expect on tonight’s episode.

*I was invited by Disney to attended the Captain America Event to share my experience with my readers including a screening of ABC’s The Family episode 8. All opinions are my own.