Jon Favreau had quite a task taking on Disney’s latest release, The Jungle Book. With a dream cast and first-time actor Neel Sethi as Mowgli, the big question is, did he pull it off? Yes, he certainly did. Here’s my The Jungle Book review.

Imagine a film entirely about life in the jungle to be 100% filmed inside. Then having a young, new actor playing the only real person role, and having to rely on his imagination to put himself into his character Mowgli, a man-cub raised by wolves. With a refreshing new twist to the Disney classic animation of the same name, with the best CGI work I have seen ever in a film, The Jungle Book is beautiful. The story of a family, full of unconditional love, and overcoming adversity, and learning to do so with the help of others. As Giancarlo Esposito shared during our interview, “What I want people to get from this movie is that sense of freedom, that sense of abandonment in the ride of this film; the sense of connection with family, even if you don’t have a family. The sense of trust that someone’s gonna adopt you and take care of you. That sense of really being engaged by the world. You know? That is what I would love people to take from this film.” I think that message comes across perfectly.

I have been asked by several of my friends what age would I recommend for kids to see The Jungle Book. It’s not for young kids that scare easily for the simple reason that the animals look real and there are some scenes that are scary. It’s rated PG for that reason. When my girls were young I would have had one that could have handled it at 5 and the other at probably at 7 or 8. So if you even question it, I would suggest checking it out first. Here’s a look at Sher Khan, a mild taste of why it may be a little scary for little ones.

I saw The Jungle Book twice, once at the Dolby Cinema at AMC Prime and then in 3D at the El Capitan for the World Premiere. Both ways were amazing to watch, however, I am not typically a fan of 3D movies, and this is one I think should be seen that way. It is so brilliant, so in 3D it’s even better.

Directed by Jon Favreau (“Iron Man”), based on Rudyard Kipling’s timeless stories and inspired by Disney’s classic animated film, “The Jungle Book” is an all-new live-action epic adventure about Mowgli (newcomer Neel Sethi), a man-cub who’s been raised by a family of wolves. But Mowgli finds he is no longer welcome in the jungle when fearsome tiger Shere Khan (voice of Idris Elba), who bears the scars of Man, promises to eliminate what he sees as a threat. Urged to abandon the only home he’s ever known, Mowgli embarks on a captivating journey of self-discovery, guided by panther-turned-stern mentor Bagheera (voice of Ben Kingsley), and the free-spirited bear Baloo (voice of Bill Murray). Along the way, Mowgli encounters jungle creatures who don’t exactly have his best interests at heart, including Kaa (voice of Scarlett Johansson), a python whose seductive voice and gaze hypnotizes the man-cub, and the smooth-talking King Louie (voice of Christopher Walken), who tries to coerce Mowgli into giving up the secret to the elusive and deadly red flower: fire. The all-star cast also includes Lupita Nyong’o as the voice of the fiercely protective mother wolf Raksha, and Giancarlo Esposito as the voice of wolf pack’s alpha male Akela. “The Jungle Book” seamlessly blends live-action with photorealistic CGI animals and environments, using up-to-the-minute technology and storytelling techniques to immerse audiences in an enchanting and lush world.

Jeffrey Flocken is the North American Regional Director for the International Fund for Animal Welfare where he leads the organization’s team of legislative professionals in the US and Canada advocating for global, national, and local policy initiatives on behalf of wildlife conservation and animal welfare. In The Jungle Book, there is an animal called a Pangolin that makes a cameo appearance. They are a critically endangered species and the most illegally traded mammal in the world. Jeffrey and his team asked the group of bloggers on The Jungle Book Event to help get the word out there about these animals that many have never even heard of before.

Pangolin’s are the most poached and illegally traded mammal in the world; scientists estimate that over 1 million animals have been killed in the last 10 years for that purpose. They are prized for their meat and scales in parts of Asia. The scales are used in traditional medicine while pangolin meat is the ultimate status symbol. Just one small animal can cost thousands of dollars. 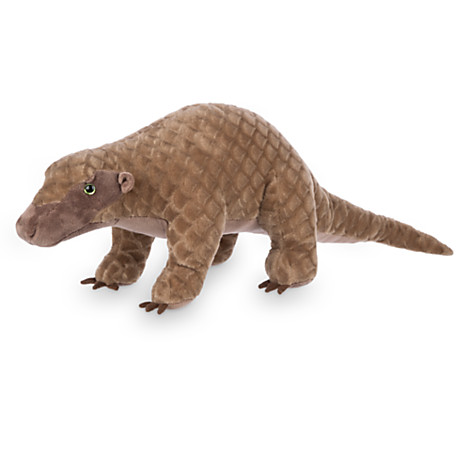 By having pangolin’s in The Jungle Book, Jeffery shared his hopes, ” We’d like as many Americans as possible to help us petition the U.S. government to give them more protection. But just the fact that a species so obscure and so little known is getting a role in such an incredibly beautiful and high profile movie like The Jungle Book, we think that will actually help us get further in talking to decision-makers and talking to consumer markets even in Asia, about this species. So we can say, ‘Well, you know, we know you can find this on a menu in a fine restaurant in China but do you see this is the actual animal that’s being killed and eaten and it’s incredibly rare and it’s such an adorable and unique species. How can we let it go extinct?’ And we think this movie will help us put that message out there where it needs to be heard.”

To find out more about these endangered species and how you can help, visit http://www.ifaw.org/.

*I was invited by Disney to cover the press junket for The Jungle Book. All opinions are my own.