I grew up in the age of Atari, Nintendo and then of course my kids have had a Wii since they came out. Gaming has always been a part of my life. Until I got to take part in the Playmation I had never imagined what they have created. Rather than playing a game where you are sitting in front of a screen of sorts to play, with Playmation, they provide real world play action powered by wearable tech.

Playmation is a new toy/game hybrid from Disney. They combine active play with video-game mechanics, so kids stay active while playing, and bring a new world of imagination to game play. Take a look on how it works.

So that arm thing – the Repulsor – it communicates with an iOS app and two Power Activators that comes in the Starter Pack. These track where the player is at any time. When the game begins, the player receives instructions via the Repulsor basically giving the mission. It’s really cool to see in action as you can in the video and I think it will change the way kids play alone and with each other, for they become an action hero and can pretend in the way we did back in the day…think cowboy and Indians. 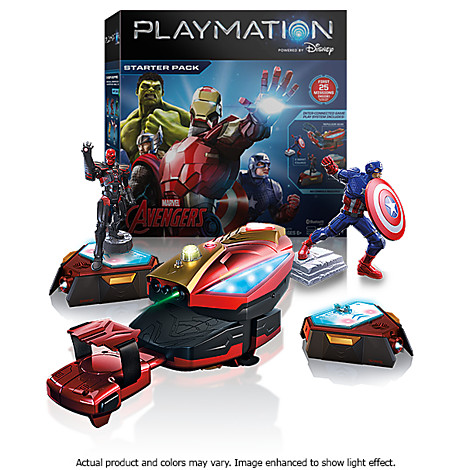 and receive a Free Smart Figure Promotion Restrictions: * Pre-Order offer is valid 07/07/2015 to 10/03/2015. Offer is valid only as part of pre-sale redemption transaction at DisneyStore.com and select Disney Store retail locations in the U.S. and Canada. Smart Figure price will be discounted automatically when added to bag as part of a Playmation Marvel’s Avengers Starter Pack purchase. Some restrictions apply. Limit one Smart Figure per Guest, per Playmation Starter Pack pre-order. Selection may vary. While supplies last.

Here’s a look at the full presentation at the D23 EXPO taken by justasplashofdiva.com to see firsthand how it works.

*I was invited by Disney to D23 EXPO to share my experience with my readers. All opinions are my own.