Zach Braff talks about being Finley the Flying Monkey

in Oz the Great and Powerful

I find that this being my last official scheduled post about OZ THE GREAT AND POWERFUL from my trip to LA last month for the world premiere of the film very suitable.  It’s kinda like what Dorothy said to Scarecrow in the original Wizard of Oz, “I think Ill miss you most of all.”  I love Zach Braff as Finley in this movie!  He was so much fun to talk to during his interview and being the last of my interviews of my press junket to post, I feel like he’s my scarecrow!

Oz at the time this post goes up has already hit the $100 million mark.  Open for just one week and it’s already done amazing at the box office.  It feels good to have been a small part of the success of this awesome film.

So Finley – The Flying Monkey – oh how I love this character.  He and China Girl, played by actress Joey King, are such a great comedic duo in the film.  Finley is just so funny!  And, well, so is Zach Braff.  Here’s what we talked about when we sat down together.

During the production you’re in this little tiny black booth?

Yeah, that’s one of the ways we did it.  By the end we had three pretty solid ways that we did it.  Sometimes I was like just scrunched down like in this blue screen Onesie which is really adorable and for six months no matter how many times I put it on, everyone pointed and laughed at me and so I sat on my butt and kinda hunched over, I was thirty-six inches tall.  I’d do that, you know, (Director) Sam (Raimi) wanted me to, he wanted to capture everything, gestures and my facial expressions.  So that, we’d do it that way.  Other times there was a puppet that I would kind of operate when he needed to be like flying and stuff.  And then there’s times when I couldn’t be there at all, and I’d be in this booth with cameras all around me.  And then James (Franco) would be looking at a monitor that was kind of on a pole.  And then he’d get the tiny ear piece in his ear, and so that’s how we could, you know, do it, ’cause Sam’s biggest thing was, I don’t want you in a sound booth at the end of the shoot.  I want you there, I want you and James improving, I want it to be two buddies on a road trip.  I think that made such a difference.  Because it wasn’t just this character that got phoned in at the end, it really was this important relationship.

What was one of your most memorable moments during filming?

You guys have seen the movie, right?  I love the moment when we find China Girl and James is putting her back together.  Because it genuinely was so moving.  I mean, even on set, it was so moving.  We were on all these giant sets and to, for the first time we were literally sitting and it was so surreal.  We were literally sitting in a tea kettle and it was James and Joey King and the puppeteer.  They had this beautiful marionette puppet, because she was small enough that she could actually have a marionette puppet.  And Sam (was there) and it was just so sweet and beautiful.  I actually had my eyes welled, and I said to Sam – that’s when I discovered that I wanted the monkey to almost be like an easy crier.  Because my eyes really genuinely welled and I was like, Sam, he doesn’t want Oz to see that he’s crying, so let’s have him covertly swipe the tear.  And then they kept in the movie, it was really sweet.

What was the most challenging part?

I think I was nervous the whole time, like I’m here for so long and working so hard.  Are they going to capture all that I’m doing? As an actor you go, okay, it’s my face, so they can’t get around that.  You know, when all that you’re doing is really reference for an animator, yeah I was nervous.  Like are they going to capture the subtleties in this.  I’m nervous to put my name on it if it’s not going to capture all the little things I’m trying to do.  And then along the way, I’ve only seen like rough (shots), you know, incarnations of (the film), ’cause it takes so long to get it that (real feel), the way you guys saw it in the movie.  And then at the premier I finally saw, and for the first time, fully photo-real and realized, and it was so exciting for me.  Because it really did capture little subtle face ticks, and things I never would have thought they would have picked up in the eyes.  And they did.  And that made me really happy, that they got it all.

You were the comedy, and that’s what kids really respond to, what’s your feeling about doing this for kids?

Well I did do Chicken Little.  So I did (a kid’s film) before.  I have nieces and nephews, I don’t have any of my own yet, but I love kids and the idea- I’ve already scored that stuffed animal and, uh, it’s really cute, you’ll love it. 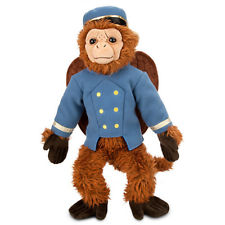 So did my nephew.  [LAUGHTER]  I have a twelve-year-old nephew right – I swear you guys will love this story as moms.  I have a twelve-year-old nephew and I walk in and his sister couldn’t come out from Florida for the premiere, but he did.  And I said I want you to give this – to his sister, she’s eight.  I want you to give this to Ella because she didn’t get to come out.  And he goes, “yeah-yeah-yeah I’ll give it to her”, and he’s sleeping on my couch. I walk in to come here this morning, and he’s totally spooning it and I’m like, there’s no way Ella is getting that stuffed animal.  Actually it was funny – I say, “I want you to give this to Ella”, he goes, “yeah-yeah-yeah we’ll share it”, and I was like, “no-no-no it’s for Ella”.  [LAUGHTER] So I told my publicist, I need like a box of those things.  One is not going to do.

How do you prepare for a role like a monkey?

I did actually go to the Detroit Zoo.  I stumbled across two monkeys, let’s just say in intimate embrace. [LAUGHTER]  Um, none of that proved useful [LAUGHS] maybe for the sequel I don’t know if the monkey gets a girlfriend or not.  It worked creating a creature from scratch, I mean, yeah, he looks like a monkey but he flies and he talks like a human.  So it really wasn’t too much monkey research to be done.

How do you feel about flying monkey trending on Twitter?

Is it?  No it’s not – because of you guys? [LAUGHTER] You guys are such scary power.  Wow, you guys can band together for good.  That’s really cool.  That’s a lot of power.  I’m going to get on there and re-tweet it. 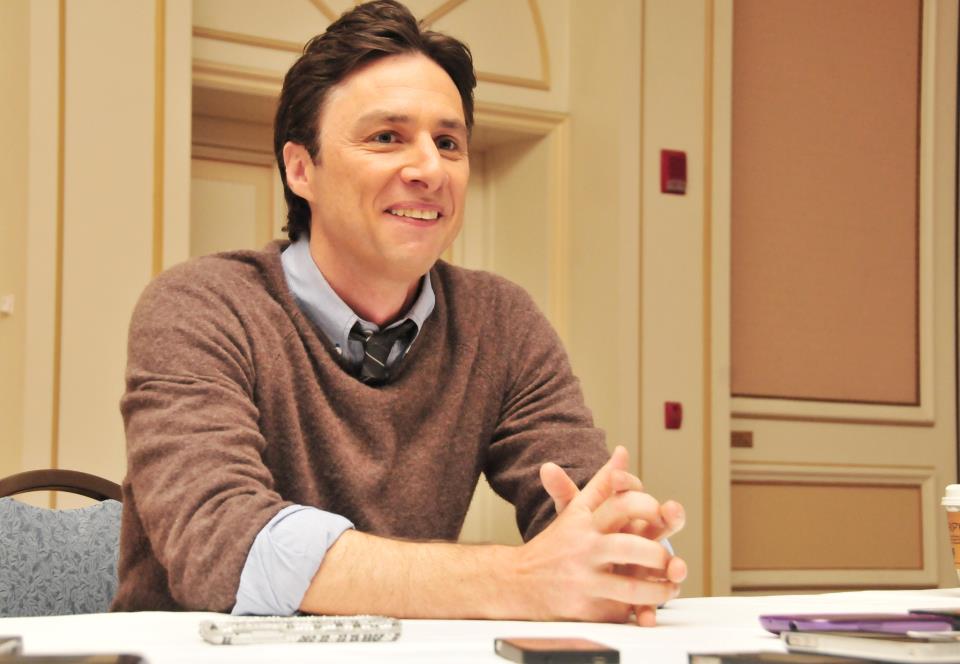 What was the audition process?

Sam asked me to come in, but he didn’t even want me to audition.  He just kinda wanted to talk and I went in his room and he had a really rough animatic, really like this pre-visualization stuff.  So, that’s what it was, it was that sequence where we’re running off the cliff and right before we go into the bubbles, where I jump off.  And the monkey didn’t have any lines.  And he said, so here’s an example.  We have this scene, but, you know, we want someone who can kinda come to the set and figure out who this guy is with me and James.  And he showed me the animation and I was watching it and I saw him jump off and-Oz says, “what are you doing, you’re jumping off?” And I just went, “I have wings”.  [LAUGHTER] And Sam just started dying laughing and I was like, I guess that’s a good sign. [LAUGHTER]  And so that’s how it started.  I found out when I got home I got the gig, ’cause I made the director laugh.  And that’s what he wanted.  He wanted someone that could sit there and go, oh what if I said this.  And I said, Sam, I promise you this, I’m going to drive you crazy, I’m going to pitch a thousand ideas, but just take what you like and leave the rest.  No hard feelings.  And there’d be plenty of times where I, we’d be on set and I’d be like, oh what if this da-da-da-da-da-da all excited and he’d be like, that’s hysterical, but it’s not called The Monkey.  [LAUGHTER] maybe when we make the movie, The Monkey, we can do that elaborate scene you just pitched [LAUGHS].  So maybe, who knows, the sequel.

OK, so yeah, it’s not called THE MONKEY, but yeah, he sure is a scene stealer!

Have you checked out OZ THE GREAT AND POWERFUL yet?  Check out the trailer and then click on all the links below!