When I was younger, it wasn’t often you saw strong female characters in movies. I am glad things have changed a bit, and in this Zoe Saldana Guardians of the Galaxy Vol 2 Interview, it’s easy to recognize that change. Zoe’s character is strong, yet maternal. And having three small children may help with channeling that strength, but Zoe shares how it’s her sisters, not her kids is where she pulls from experience. However, as much as she can try to be that pillar of a woman, even a few stunts may have her shaking in her pants a bit. And as much as she loves these characters she’s played over the last ten years; she is ready for a change.

Set to the all-new sonic backdrop of Awesome Mixtape #2, Marvel Studios’ “Guardians of the Galaxy Vol. 2” continues the team’s adventures as they traverse the outer reaches of the cosmos. The Guardians must fight to keep their newfound family together as they unravel the mystery of Peter Quill’s true parentage. Old foes become new allies and fan-favorite characters from the classic comics will come to our heroes’ aid as the Marvel Cinematic Universe continues to expand

Hi, everyone. How are you guys?

She enters the room full of positive energy and a huge smile. She is so much more than her petite frame gives away. We jump right into the interview.

How did you feel about your history coming out between Gamora and Nebula Vol 2?

I loved it. It was very exciting to have three female characters in this movie. They all provide three different essences. Mantis just resembles such an innocent creature. Nebula is so angry, and Gamora is so maternal. She’s turned over this new leaf. In the first movie, she was so selfish. It was about getting away, and running away from her father. Now it’s about keeping this family together and keeping them always on track. So she went the opposite of who she was in the first movie.

Do you kind of pull from your maternal nature while playing Gamora?

No, I never looked at any of them and thought, oh, these are like my kids. No. (Laughing)

I tried, but I’m the middle child of three sisters, so I was never the Gamora. My sister, Marielle is more the Gamora. She keeps us on track and everything. I was always the f*ck up. I was always the one, “Zoe, focus, focus,” I’m like, squirrel! (Laughing) ‘Cause middle kids are sort of, I don’t know; it’s the title that they give you. You don’t take any responsibility or finish what you start. And you never obey your parents. That was me. So channeling something in Gamora, I think I was just thinking about my sister.

About the responsibility that she must’ve put upon herself to help my mom raise Cicely, my younger sister, and I.

You’ve spoken openly about your love for women empowerment, and the role of Gamora is such strong character. Can you talk about making her such a badass?

I love it. I do, I do. But, you know, I would like to take a break from playing kick-ass science-fiction females. I’ve been doing it for over 10-years, I’m kind of tired.

But I was little, I only had two icons that I could reference. I’d watch those movies until my tape would break. And it was Ellen Ripley from Aliens, and it was Sarah Connor from Terminator. I would watch these movies endlessly. And then it was like, Jamie Lee Curtis, when Katherine Bigelow did Blue Steel, and James Cameron also True Lies. I had her as a reference. But other than that, I was always like, watching action movies told through the eyes of males and stuff, but always feeling that gap, that void, you know?

And I feel like I did take it upon myself just to be happy with the fact that I took a gamble on these movies for the first time, they ended up being super special, and they went into sequels.

I didn’t think of this, trust me. It was not my idea. I just had my responsibility to fulfill them. But once I was there, I didn’t want to be better about it. I wanted to acknowledge that maybe it means something. Maybe it is important that I’m a part of those women that are filling in that gap so that women can have, I don’t know, more options, more references.

So now that you are one of those women that people are going to look to, what do you want young girls to take away from Gamora, or your character in general?

I think that it’s okay to be still vulnerable and be strong. For some reason, we take it upon ourselves, or where we are told, that you have to be one thing or the other. And I think that vulnerability is a strength, and being strong means that you have to be vulnerable. So, I hope young women take that. ’cause I don’t see Gamora as a strong character. I see her as someone that’s tired. (Laughs) Annoyed, but she’s very vulnerable.

Can you talk a little bit about the stunt process, and what was you, what was your stunt woman?

Her name is Lee-Anne Telford, and she’s phenomenal. She did all the parts where Gamora looks unbelievably cool, that’s Leanne. (laughter) And all the parts where I’m, like, posing, and taking out my sword and stuff, that’s me. (laughter) But I did do a lot of those jumps. And I would do a lot of the stunts that she would do, but like, the PG-13 version. Because, one, I can’t do them. And two, it’s a liability to the film if I get killed or something.

I posted something on Instagram. There is a jump that I did. They made me jump from like, three stories or something, like a 30-foot jump? And I was on wires, but I don’t know, I still can’t remember if somebody told me, and I just brain farted, or someone forgot to tell me that I was going to free fall. Like, I was not going to feel the tension on the wires. So when they said action, I jumped, ’cause obviously I don’t like to take my time, there are so many men watching you. I jumped and thought I was dying. Forgot to speak English, I was like, help me — (Laughing)

That time James Gunn made me jump from a super high place and forgot to tell me I wouldn’t feel tension from my wires. Will this make it into the movie?? #gotg #gotgvol2 #setlife #humbled #blessed to be living my dreams. @jamesgunn @guardiansofthegalaxy

And then James Gunn was like, “yeah, your face was kind of awful there. You have to do it again.” And I was just like, oh my god. So I did it again. And then, you guys can watch it, I mean, it’s on Instagram. But as soon as I land, I was like, I don’t want to do this again. Like, the girly girl came out of me. It was awful but super fun.

How long did it take for the makeup process?

What do you do to pass the time?

(sighs) You guys. I talk to everyone. (laughing) I speak in every language. I turn on music. I’m on my phone. I FaceTime with my kids, I FaceTime whoever’s up. Like, oh, New York is up, oh, DR is up, what’s up? (laughing) I’m talking to myself. Sometimes I would see them putting the TV on, like, super high, to see if I would just get the picture and just shut the f*ck up. (laughing) I’d be awake from 2:30 in the morning until, until, you know, until the time I would get to set. I talk to everybody. But I’m just one of those mom-a-la’s. Like, I’m just an old lady.

In Marvel Studios’ “Guardians of the Galaxy Vol. 2,” out May 5th, the Guardians must fight to keep their newfound family together as they unravel the mystery of Peter Quill’s true parentage. 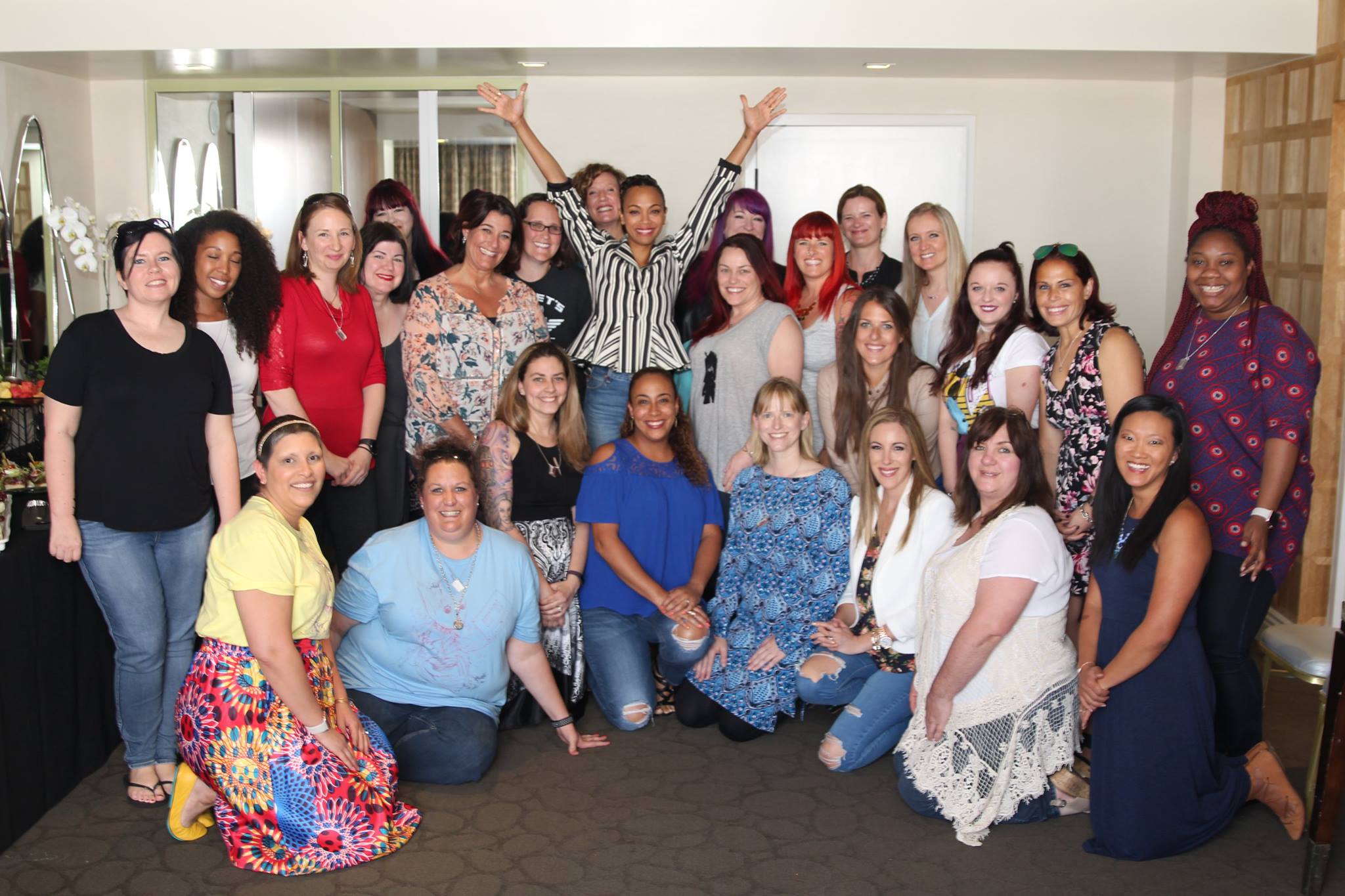 Click here for more Guardian of the Galaxy posts!